This extensive exploration program will be designed to target two objectives: the first to determine drill targets around the area of the previously reported till sampling results obtained from the Company's exploration program on the property. The second objective will be to conduct the first gold till sampling program that extends approximatley15 kilometers from East to West on the northern half of the project and lies directly below the known gold resources from Bonterra, Osisko and the former Beaufield (now Osisko's) properties. The intention of this wide-ranging program is to determine the extent of the potential gold resources that may continue onto Secova's properties. Both Osisko Mining & Bonterra Resources continue to discover new areas with high-grade gold values.

"The Windfall Lake gold region is quickly becoming the world's next major gold camp and is controlled by two key companies, Osisko and Bonterra. Secova is now the only other company in the area with a significant land package.The Company holds over 19,000 hectares of contiguous claims that are adjacent and lie directly south of known gold deposits," stated Brad Kitchen, C.E.O. of Secova Metals. "This aggressive exploration plan will provide Secova with a better idea of the extent of the gold resources continuing onto the Company's claims and provide definition for Secova's proposed drilling program next year. This program and subsequent drilling will generate value for our shareholders as the Company builds to the market capitalization of its neighbours which is currently over $1.0 billion."

The original sampling program produced very positive results for gold sampling with a 96% success rate for discovering gold particles. Normally, gold samples are located at or near the source of gold deposits but may travel up to distances of up to 4 to 6 km. The grab results were located well within Secova's property limits and were in fact 10 km from the edge of its property. This would lead us to believe that there potentially could be gold resources well within Secova's property. Further, a detailed VTEM airborne geophysical survey was completed by Secova that identified multiple targets that coincide with the gold samples collected during previous exploration. The exploration plan will consist of taking approximately 115 to 215 samples in this area. Please see the map below for detailed exploration targets.

Map detailing the extent of the Exploration Program 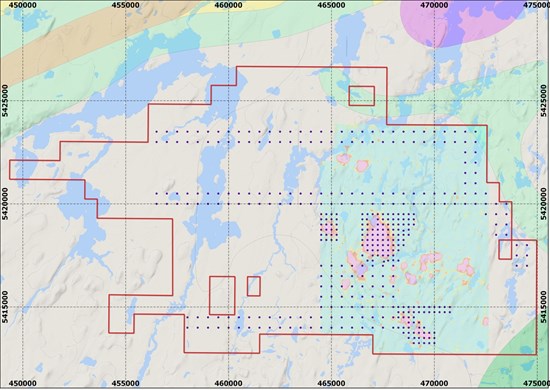 The second phase of the extensive exploration program will extend over the entire horizon of the Company's Eagle River project. It will consist of two to three lateral sets of sampling programs. One to the North of the property which is intended to potentially identify and confirm if there are surface extensions of the gold resources found by Secova's neighbours in the area. And the second line could potentially confirm the extent of those gold resources into Secova's Eagle River project. The third line, if budget and timing permits, would be set along the Southern edge of the property to capture any particles from the top two-thirds of the property. We anticipate taking between 60 and 185 samples along the two lines each of which will extend for at over 10 kilometers. The map above details where the sampling will take place and outlines the enormity of the program.

The entire sampling program should take about three weeks, with assay results two to three months afterwards. The extensive exploration program will take place, as soon as possible but is weather and hunting season dependant. This sampling program has been demonstrated to be an extremely efficient way to identify potential drill targets. The understanding of how the gold particles were transported by ice flow, streams or rivers, when combined with the results of the VTEM magnetic anomalies provide an advanced analysis of the potential gold targets.

Further, Osisko initially performed an extensive grab sample program on their Windfall Lake project in 2015 and the results have proven to be consistent with their known resources. Although Secova's initial grab sample program in 2017 was much smaller in scope, the results were statistically better than Osisko's, and we anticipate this program will have continued success.

Management of the Company were told late Friday that its partners at the Duvay/Chenier project issued a unilateral press release stating that Secova was in default of its obligations under its option agreement with Tres Or. Secova is not in default of this agreement and the good standing is supported in Secova's recently filed (November 29, 2018) Audited Annual Financial Statements for the period ended June 30, 2018. The Company will review and take appropriate action.

Secova Metals Corp. is a Canadian exploration company focused on building a strong asset base through exploration of undervalued projects in Canada. Management has demonstrated expertise in advancing gold exploration projects into acquisition targets, most notably in the province of Quebec. Secova has the exclusive right and option to acquire from Tres-Or Resources Inc. ("Tres-Or"), an undivided 65% right, title and interest in the contiguous Duvay/Chenier Gold Projects. Secova can earn up to 90% of the property (an additional 25% ownership) by funding a pre-feasibility study after the initial exploration expenditures to bring the property towards production. The Company has a total contiguous land package of 174 claims covering over 7,766 hectares (17,458 acres) of land. Duvay/Chenier is located in the Abitibi gold belt, one of Quebec's premier mining jurisdictions. The Company has plans to advance the development of Duvay/Chenier as well as seek other avenues of growth through acquisition and mergers. The Company also has 100% ownership of the Eagle River project which is adjacent to and on-trend to several gold projects in the Windfall Lake district of Urban Barry in Quebec. Secova will use its expertise in early stage exploration to create shareholder value by attempting to prove out the potential resource in these assets.

For more information on Secova Metals Corp. please contact info@secovametals.com, Tel: +1 604-558-5397 or visit the website at www.secovametals.com for past news releases, media interviews and opinion-editorial pieces by CEO and Chairman Brad Kitchen.

On Behalf of the Board of Directors,
SECOVA METALS CORP.