ORLANDO, Fla., May 13, 2022 /PRNewswire/ -- Saudi Arabia will soon become home to the country's first and the region's largest water theme park that is currently under development at Qiddiya - the future Capital of Entertainment, Sports and Culture - situated on the outskirts of Saudi capital, Riyadh. Falcon's Creative Group, a sector of Falcon's Beyond, revealed it developed the park's master plan, in conjunction with Qiddiya Investment Company (QIC) - the entity driving the development of Qiddiya. 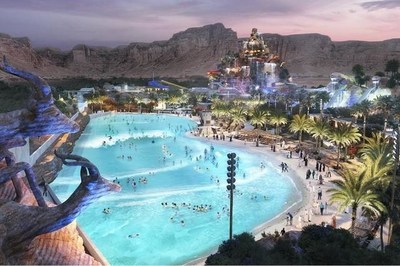 With multiple unprecedented themed and immersive water attractions, Falcon's master plan for the project alters the vision for future water theme parks. The year-round park will span across more than 252,000 square meters and feature 22 rides and attractions, including nine that will be world firsts. It will also be the only water theme park in the world that offers a unique mix of dry and wet rides as well as state-of-the-art, competition-level facilities for water sports enthusiasts - including the first-ever surfing and white-water rafting experiences - as well as 17 F&B and retail outlets.

Visitors will experience nine innovatively designed zones - the Entry Gate, Camel Rock, Dub Grotto, Wave Wadi, the Den, Viper Canyon, Arabian Peak, the Herding Grounds, and Surf Lagoon - inspired by the native animals that inhabit the area around Qiddiya. The experience of each ride will reflect the attributes of the creature for which each is named. For example, based on the aggressive snake, Viper Canyon will feature some of the most thrilling rides, while Dub Grotto, branded for the curious, playful dub lizard, will be home to an energetic water playground for children.

"Qiddiya Water Theme Park will be unlike any other existing water park, with environments that take guests to amazing locations and an atmosphere that enables them to truly escape," said Cecil D. Magpuri, CEO of Falcon's Beyond. "We are honored to bring not only deep development experience, including past projects in Dubai, but also industry-leading technology prowess to create an entertainment experience that is truly game-changing. This is also an exciting and unique opportunity for us to participate in the ongoing transformation in Saudi Arabia and to set a new benchmark in water theme parks and family entertainment for others to follow."

Falcon's has master planned the park in compliance with QIC's sustainability practices, including technology that interconnects the structure of certain rides, enabling the transfer of water from one body to another, prioritizing recycling over waste. Other integrated technologies will reduce water pressure for select rides, reducing the amount of water used significantly. Additional elements of the park will be built to use 75% less water compared to other water park rides, where even rainwater will be captured, treated, and reused.

"By delivering an entirely new type of immersive entertainment experience, the Qiddiya Water Park will change the way we think about water parks," said Scott Demerau, Executive Chairman of Falcon's Beyond. "Moreover, we believe our sustainability approach to its development will set a new standard for future parks, benefitting the world around us."

About Falcon's Beyond
Headquartered in Orlando, Florida, Falcon's Beyond is a fully integrated, top-tier experiential entertainment development enterprise focusing on a 360° IP Expander model. The company brings its own proprietary and partner IPs to global markets through owned and operated theme parks, resorts, attractions, patented technologies, feature films, episodic series, consumer products, licensing, and beyond. The company has won numerous design awards and provided design services in 39 countries around the world, turning imagined worlds into reality. www.falconsbeyond.com

About Qiddiya Investment Company
Qiddiya Investment Company (QIC) is driving the development of Qiddiya, located south-west of Saudi capital Riyadh, that is set to become the future capital of Entertainment, Sports and Culture. The project is fully aligned with the core tenets of Vision 2030, the Saudi leadership's overarching transformation blueprint.

In December 2021, plans were announced for the construction of Six Flags Qiddiya in a contract worth SAR 3.7 billion. It will feature several world's first rides including the signature attraction, The Falcon's Flight, which is the tallest, longest and fastest roller coaster in the world.