SHANGHAI, April 2, 2018 /PRNewswire/ --Through the backing of the AEP-China Project - an innovative cultural and arts expansion program jointly initiated by Maestro Long Yu, the Shanghai Symphony Orchestra and Volkswagen Group China- eight of the leading musicians from the NDR Elbphilharmonie Orchestraarrived in Shanghai for a one-week teaching experience at the Shanghai Orchestra Academy (SOA). Themusicianshosted the "Volkswagen Group China Music Night" concert,in which they performed together with SOA students on the evening of March 16th. The next day, they performed someof Mozart's most well-known works with the Shanghai Symphony Orchestra, conducted by Lin Daye, showcasing to Shanghai audiences the inspiration that led to the creation of the some of the best pieces of German classical music. 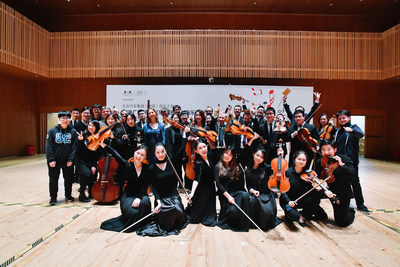 In 2015, the SOA formally established a collaborative partnership with the NDR Elbphilharmonie Orchestra whereby both would jointly train aspiring up-and-coming musicians during a five-year period. The collaboration focuses on ahands-onapproachwhereby students rehearse and perform in concert with some of NDR's leading musicians with the aim of deepening their understanding of the passageswhile improving their performance and mastering the style and skills of professional orchestras through high-intensity practice. Commenting on the teaching week, solo horn player Claudia Strenkert - on her second "tour of duty" to Shanghai- said, "We're from Europe, and we've been listening to Mozart and Richard Strauss since childhood. It's part and parcel of our lives. Many aspects of Austro-German music are like our language, and the breathing in the music is often the same as the German pronunciation. This is what we were born with as Germans. But students at the SOA come from a different cultural background, and most probably don't understand German. With this in mind, I decided to start the course by giving them a basic grounding in the German language and then follow up with the instruction in Austro-German music. I'm quite surprised and satisfied with their inquiring minds and eager attitude."

The educational partnership program is not limited to Shanghaiand provides aspiring young symphony musicians acrossChina with practical opportunities to learn from members of well-established European orchestras. After the Shanghai tour, the SOA led an ensemble consisting of three of the NDR musicians on a tour to Lanzhou in Gansu Province where they collaborated with the Lanzhou Symphony Orchestra in tandem with other local musicians in aspellbinding concert on March 23. The mesmerizing quality of Austro-German music that has beguiled audiences for generations continued to cast its magic that evening in Lanzhou.