VANCOUVER, BC / ACCESSWIRE / February 27, 2019 / GREAT ATLANTIC RESOURCES CORP. (TSXV.GR) (the "Company" or "Great Atlantic") is pleased to announce it has received all analytical results from the 2018 exploration program at its Golden Promise Property, located in the central Newfoundland gold belt, the results identifying additional exploration targets. The 2018 soil and rock analytical results confirm gold soil anomalies +/- rock samples anomalous in gold in at least three additional target areas in under-explored regions of the property. The Company's main focus on the property remains the Jaclyn Zone where multiple gold bearing quartz vein systems occur. Gold bearing veins and gold bearing quartz vein boulders occur in other regions of the property. 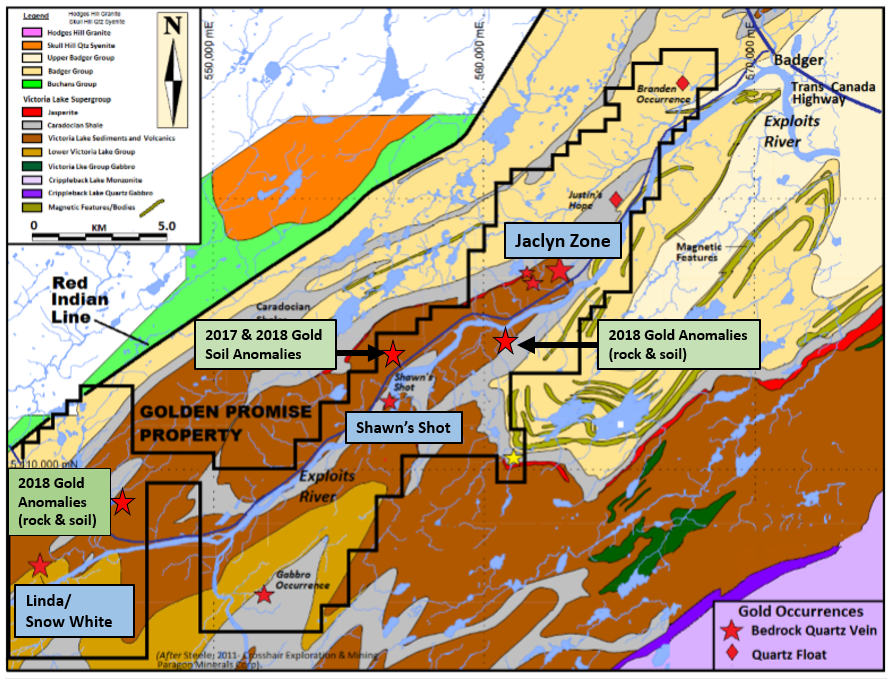 Soil sample analytical results from the southwest region of the Golden Promise Property were reported in the Company's News Release of September 27, 2018. The results include anomalous gold in soil samples from a new target area in this southwest region. The majority of soil samples from two reconnaissance lines in this target area returned anomalous values for gold (up to 77 parts per billion (ppb) gold) including all 11 samples from one approximately 570-meter long line. Nine of the 2018 rock grab samples (float and outcrop) from this anomalous zone returned anomalous gold values, the high value being a boulder sample with quartz veins returning 1.04 g/t gold. This anomalous zone is approximately 4 kilometers northeast of the Linda / Snow White gold bearing vein which is located within the southwest region of the property. Reported historic highlights for the Linda / Snow White vein include a 232 g/t gold grab sample, 29.7 g/t gold over 0.5 meters in a channel sample and 19.5 g/t gold over 1.15 meters during diamond drilling (core length). 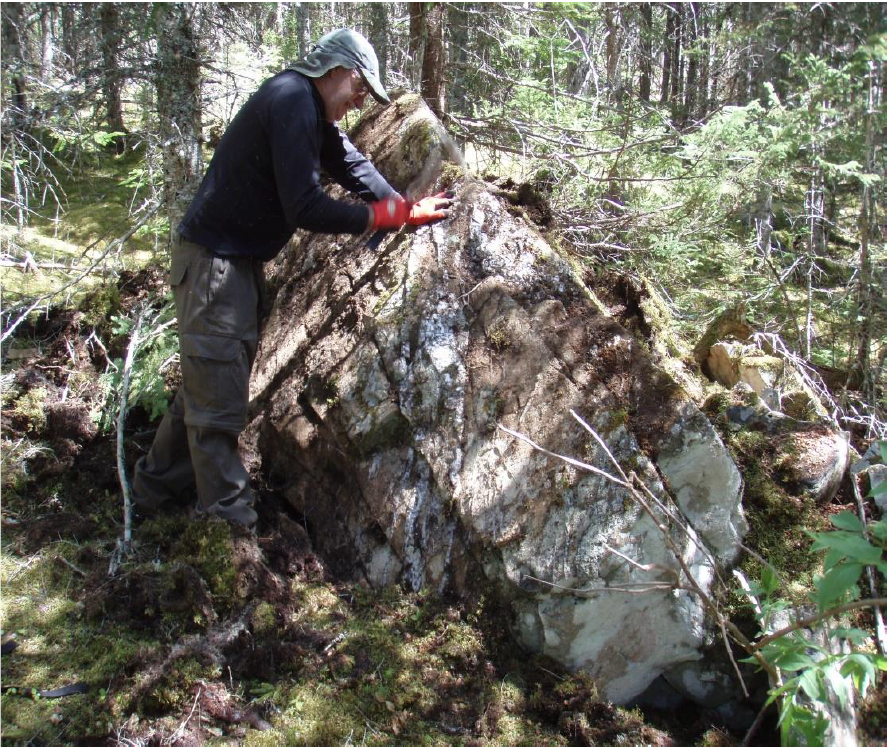 The 2018 program confirmed an area of gold soil anomalies in the west-central region of the property. Initial reconnaissance soil sampling by the Company in this region during 2017 identified gold anomalies (including samples returning 212 and 236 ppb gold). Soil sampling in this area was continued during 2018 along 2 north-south lines. Six of seven soil samples from an approximately 300-meter long section of one line returned anomalous values for gold in the 8-41 ppb gold range, confirming this new target area. This zone of gold soil anomalies is located approximately 1 kilometer northwest of the gold bearing Shawn's Shot quartz vein. A 0.32-meter long chip sample collected by the Company across the Shawn's Shot vein in 2017 returned 48.2 g/t gold (News Release of August 28, 2017).

The 2018 program established a new gold target area in the east-central region of the property. Prospecting and soil sampling were conducted along one east-west reconnaissance line in this region. Approximately 25% of the soil samples along an approximately 2-kilometer section of this line returned anomalous values for gold (6-39 ppb gold). Rock samples from quartz boulders in this region returned anomalous values for gold (up to 136 ppb gold). The target area is approximately 2.2 kilometers south-southwest of the gold bearing Jaclyn Main Zone. The Jaclyn Main Zone has been the primary focus of historic gold exploration on the property.

Mineral Resources are not Mineral Reserves and do not have demonstrated economic viability.

There is no certainty that all or any part of the Mineral Resources estimated will be converted into Mineral Reserves.

Mineral resource tonnage and contained metal have been rounded to reflect the accuracy of the estimate, and numbers may not add due to rounding.

Mineral resource tonnage and grades are reported as undiluted. 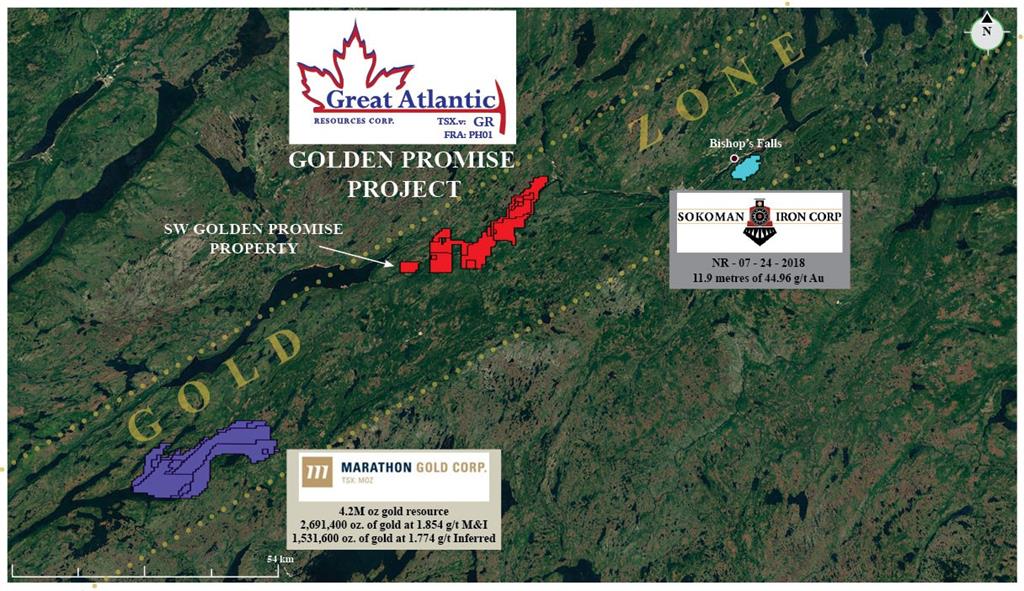 As reported in the National Instrument 43-101 Technical Report on the Golden Promise Property, Central Newfoundland (revised), dated December 4, 2018 by Mr. Greg Z. Mosher, M.Sc. App., P.Geo., and Mr. Larry Pilgrim, B.Sc., P.Geo., the Jaclyn Main Zone was modelled as a single quartz vein that strikes east-west and dips steeply to the south. Modelled vein thickness was based on true thickness derived from quartz vein intercepts. The estimate is based on 220 assays that were composited to 135 one-meter long composites. A bulk density of 2.7 g/cm3 was used. Blocks in the model measured 15 meters east-west, 1-meter north-south and 10 meters vertically. The block model was not rotated. Grades were interpolated using inverse-distance squared (ID2) weighting and a search ellipse that measured 100 meters along strike, two meters across strike and 50 meters vertically. Grades were interpolated based on a minimum of two and a maximum of 10 composites with a maximum of one composite per hole so the grade of each block is based on at least two drillholes thereby demonstrating continuity of mineralization. For the capped mineral resource estimate, all assays that exceed 65 g/t gold were capped at 65 g/t gold. All resources were classified as Inferred because of the relatively wide spacing of drill holes through most of the zone.

Because part of the vein is near surface the resource estimate was constrained by a conceptual open pit to demonstrate reasonable prospects of eventual economic extraction. Generic mining costs of US$2.50/tonne and processing costs of US$25.00/tonne were used together with a gold price of US$1,300/ounce. A conceptual pit slope of 45° was assumed with no allowance for mining loss or dilution. Based on the combined hypothetical mining and processing costs and the assumed price of gold, a pit-constrained cutoff grade of 0.6 g/t was adopted. For the underground portion of the resource a cutoff of 1.5 g/t was assumed. The cutoff grade for the total resource is the weighted average of the pit-constrained and underground cutoff grades. 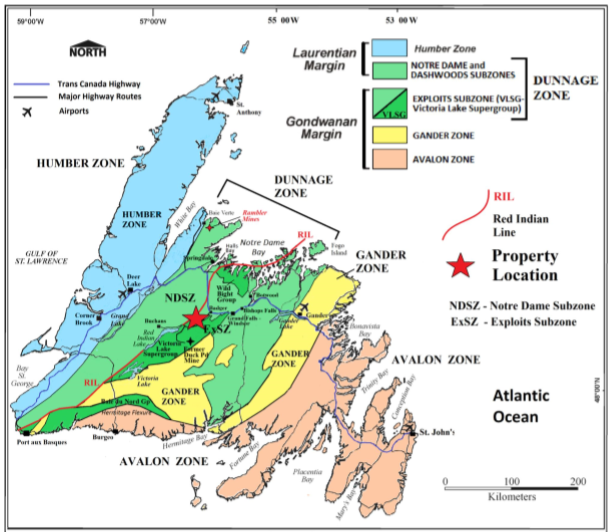 The 2018 rock and soil samples were analyzed by Eastern Analytical Ltd. in Springdale, NL for gold by Fire Assay and for 34 elements by ICP. A qualified person managed and conducted the 2018 exploration program.

David Martin, P.Geo., a Qualified Person as defined by NI 43-101 and VP Exploration for Great Atlantic, is responsible for the technical information contained in this News Release.

About Great Atlantic Resources Corp.: Great Atlantic Resources Corp. is a Canadian exploration company focused on the discovery and development of mineral assets in the resource-rich and sovereign risk-free realm of Atlantic Canada, one of the number one mining regions of the world. Great Atlantic is currently surging forward building the company utilizing a Project Generation model, with a special focus on the most critical elements on the planet that are prominent in Atlantic Canada, Antimony, Tungsten and Gold.
On Behalf of the board of directors