National Council of Resistance of Iran: Hope for a Democratic Future, Praise for Resistance Units in Iran, Calls for a Firm US Policy at NCRI-US's Nowruz Reception

WASHINGTON, DC / ACCESSWIRE / March 25, 2019 / The U.S. Representative Office of the National Council of Resistance of Iran (NCRI-US) celebrated the Iranian New Year, Nowruz, with a dinner reception at the historic Mayflower Hotel on March 22nd. 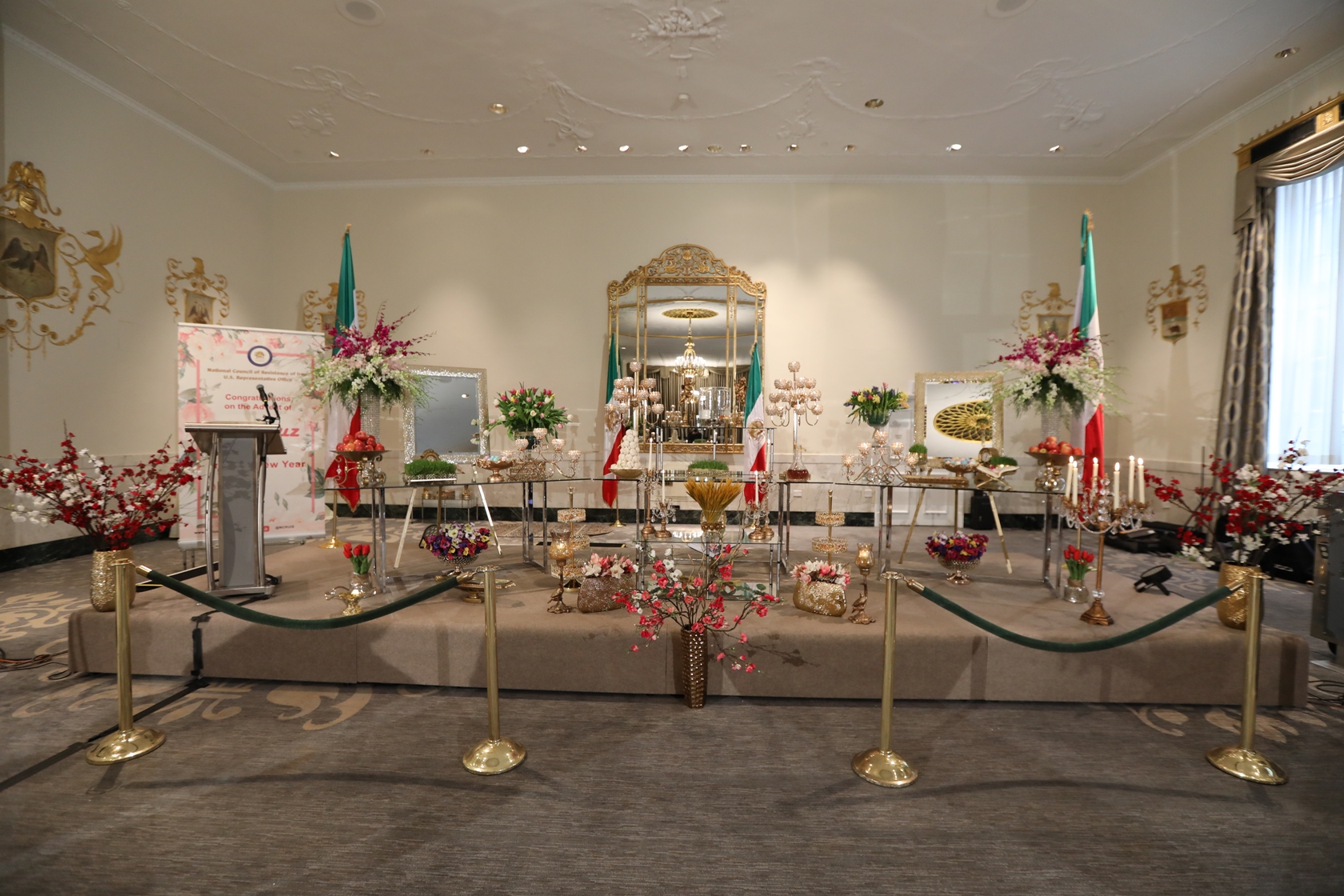 The traditional 'Haftseen' marking the Nowruz holidays, an explosion of culture and color celebrating more than 3,000 years of Persian history

Several former senior U.S. officials called for a firm policy to counter the theocratic regime. Their calls were echoed by Iranian adherents of the NCRI, who declared their support for change in Iran. Members of the diplomatic corps and congressional staffers joined in the celebrations, as renowned violinist Christine Kharazian performed several classical and Iranian pieces, much to the delight of the overflowing audience.

A number of prominent speakers addressed the gathering of young and old, against the backdrop of an elaborate Haft Seen, a traditional symbol of the ancient Persian Nowruz festivities.

NCRI Foreign Affairs Committee member, Dr. Sofey Saidi, welcomed the guests, and said, "Nowruz literally means a New Day. And I hope this year, 1398, on the Persian calendar, would indeed mark a New Day in our fettered homeland, leading to a free and democratic Iran. And given the enduring year-long uprising, change to a better and brighter future for the Iranian people seems inevitable." 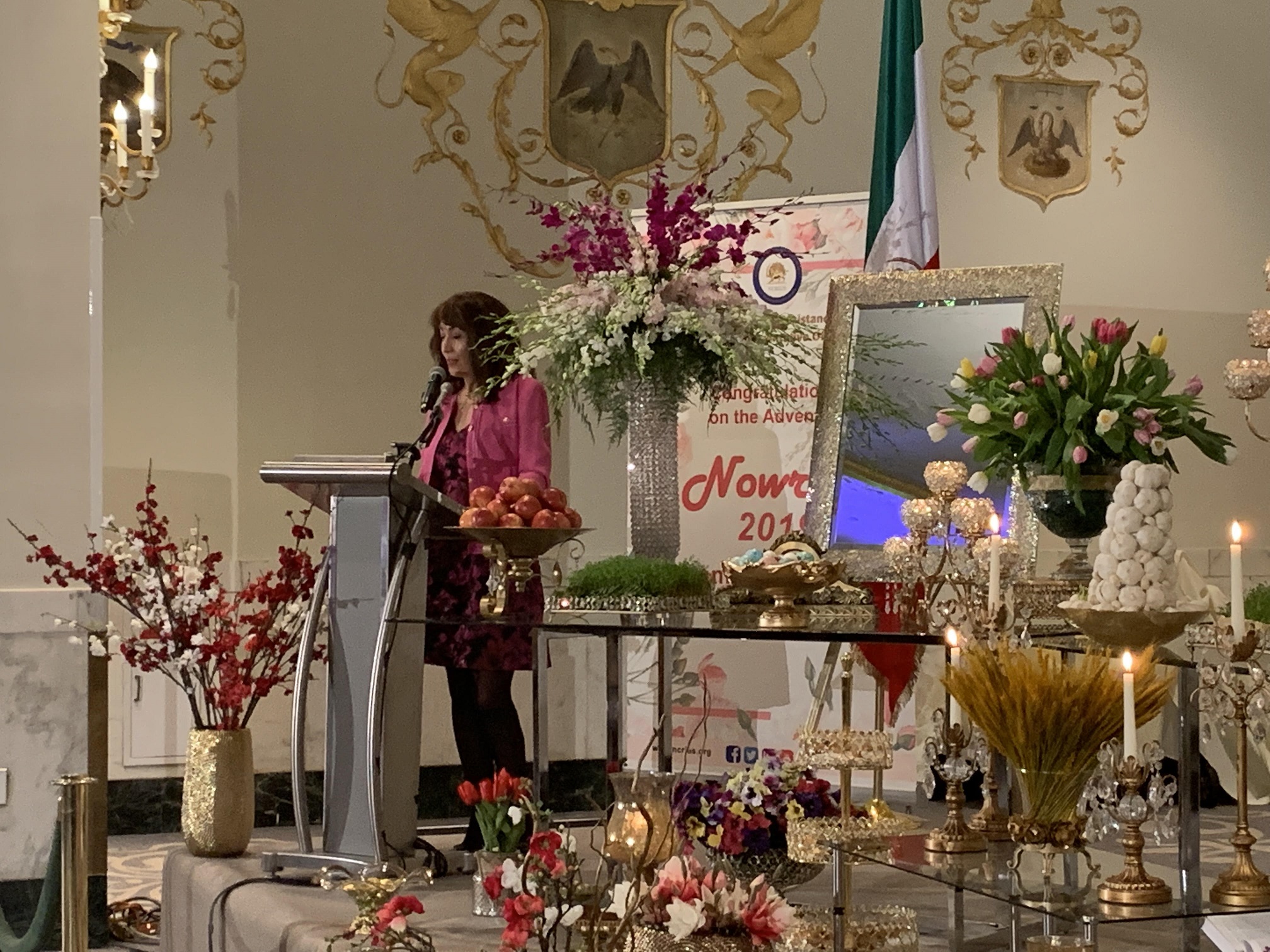 Ms. Soona Samsami, NCRI's Washington representative, remarked that "Nowruz is an Iranian tradition that goes back thousands of years. It is meant to mark a new beginning, the advent of spring. It reflects a profound belief in the triumph of happiness over suffering, spring over the winter, and freedom over tyranny." Referring to the developments of the past year, she underscored the deadly impasse facing the mullahs as an indication "that another Nowruz is dawning" in Iran. 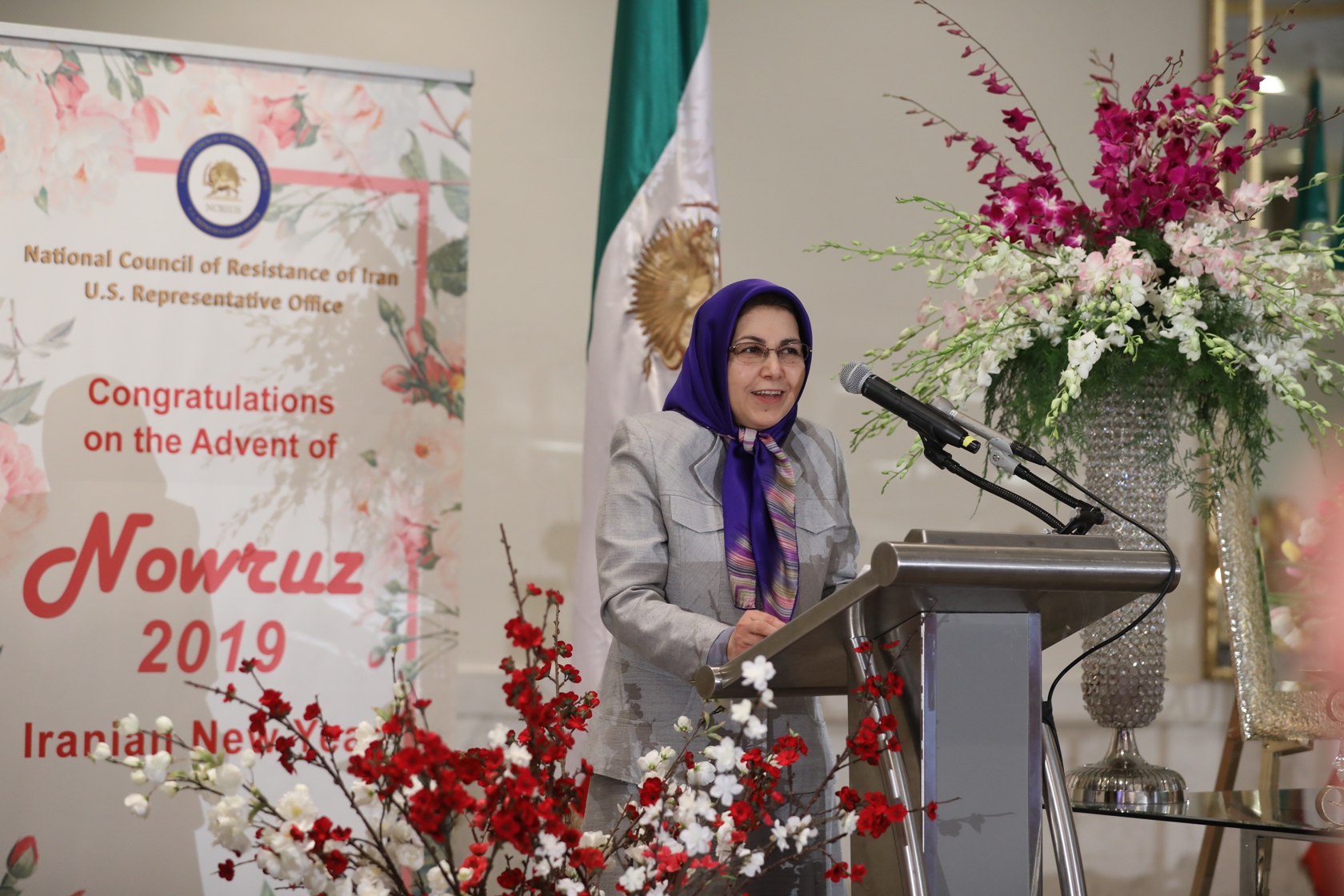 "The Resistance's network in different Iranian cities has expanded exponentially," Ms. Samsami explained, adding, "The linchpin of this expanding network are the resistance units taking shape, which Iranian youths have enthusiastically embraced. These resistance units have enabled the Iranian Resistance to ensure the continuation of the rebellion."

Ms. Samsami was followed by Tom Ridge, the first Secretary of Homeland Security and former Governor of Pennsylvania, who noted that "since the recent sustained internal rebellion in 160 cities, there have been 10,000 people arrested. The people in their own way are saying the situation is unacceptable and they want change… 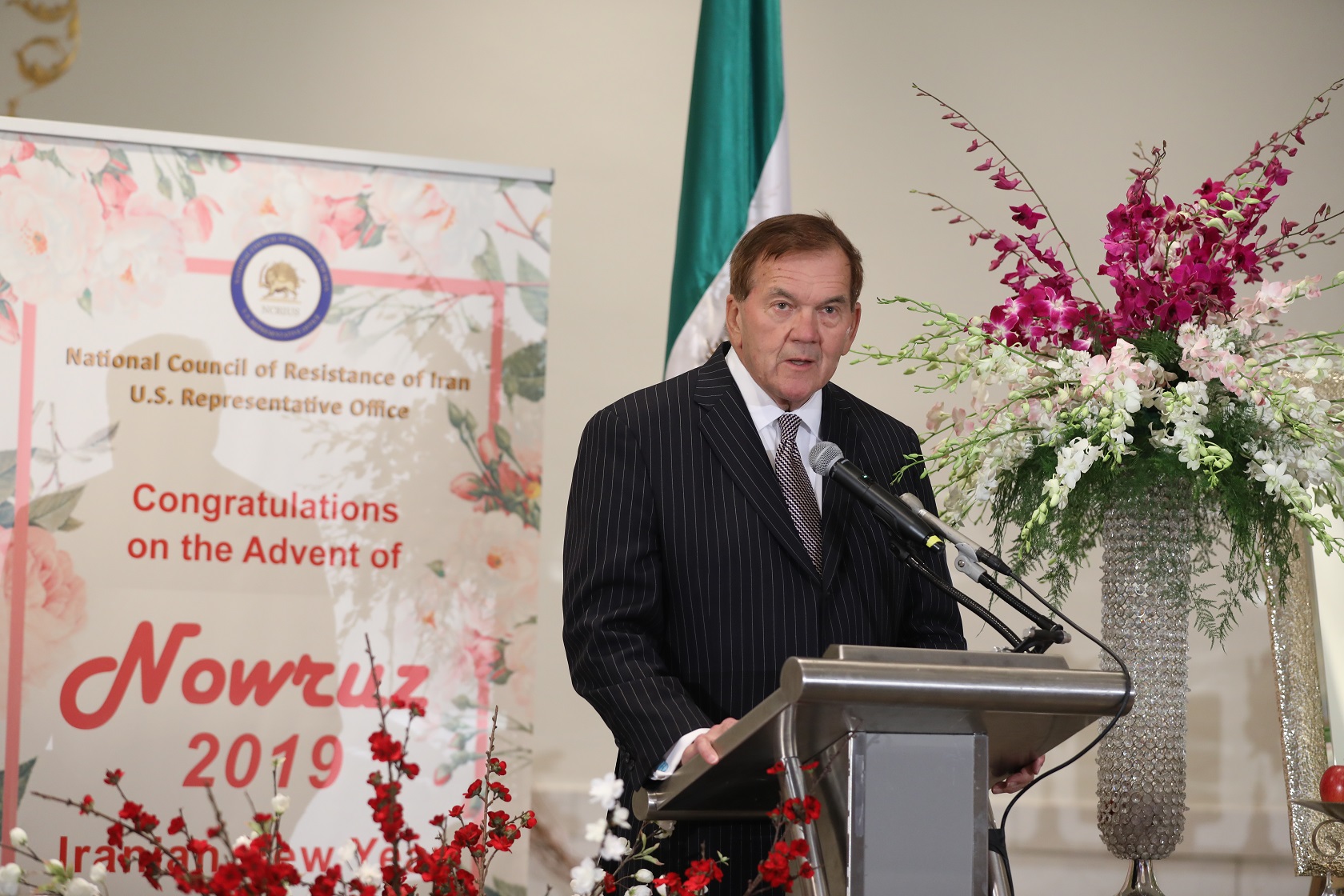 Tom Ridge, the first Secretary of Homeland Security and former Governor of Pennsylvania

Ambassador Robert Joseph, former Under Secretary of State for Arms Control and International Security, described the "astonishing" and "impressive" dedication and commitment of the residents of the sprawling facility known as Ashraf 3, whom he met during his recent visit to Albania. "Today," he said, "we can celebrate with the confidence that a free Iran is on the horizon, that the rebirth of the great Persian nation is at hand… The Iranian people today will continue to rise up to throw off this yoke of oppression. The 10-point Plan of the MEK and the NCRI point the way to freedom and to bringing that light to take away the darkness." 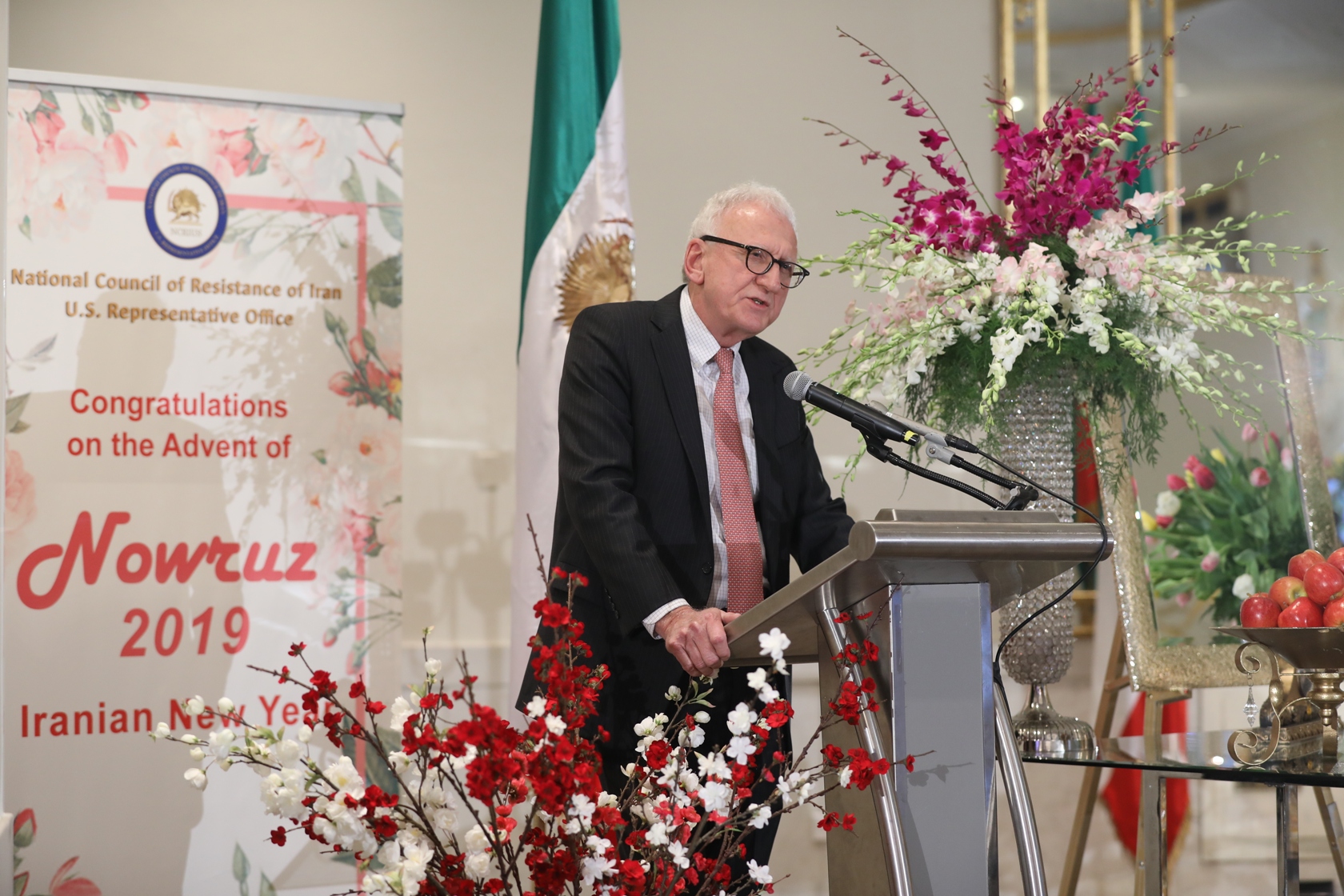 "Governor Ridge, Ambassador Blackwell and the other dignitaries know Madame Rajavi and the MEK. They spend time talking about the future of Iran, putting in hours and hours of their own time, dedicating themselves to the future of Iran just as the Iranian American community, the NCRI and the MEK in Paris, Albania, Washington and elsewhere are doing," Ambassador Lincoln Bloomfield Jr declared. "We stand for courage and for the search for the truth and ultimately for justice for the Iranian people," the former U.S. Assistant Secretary of State for Political-Military Affairs emphasized. 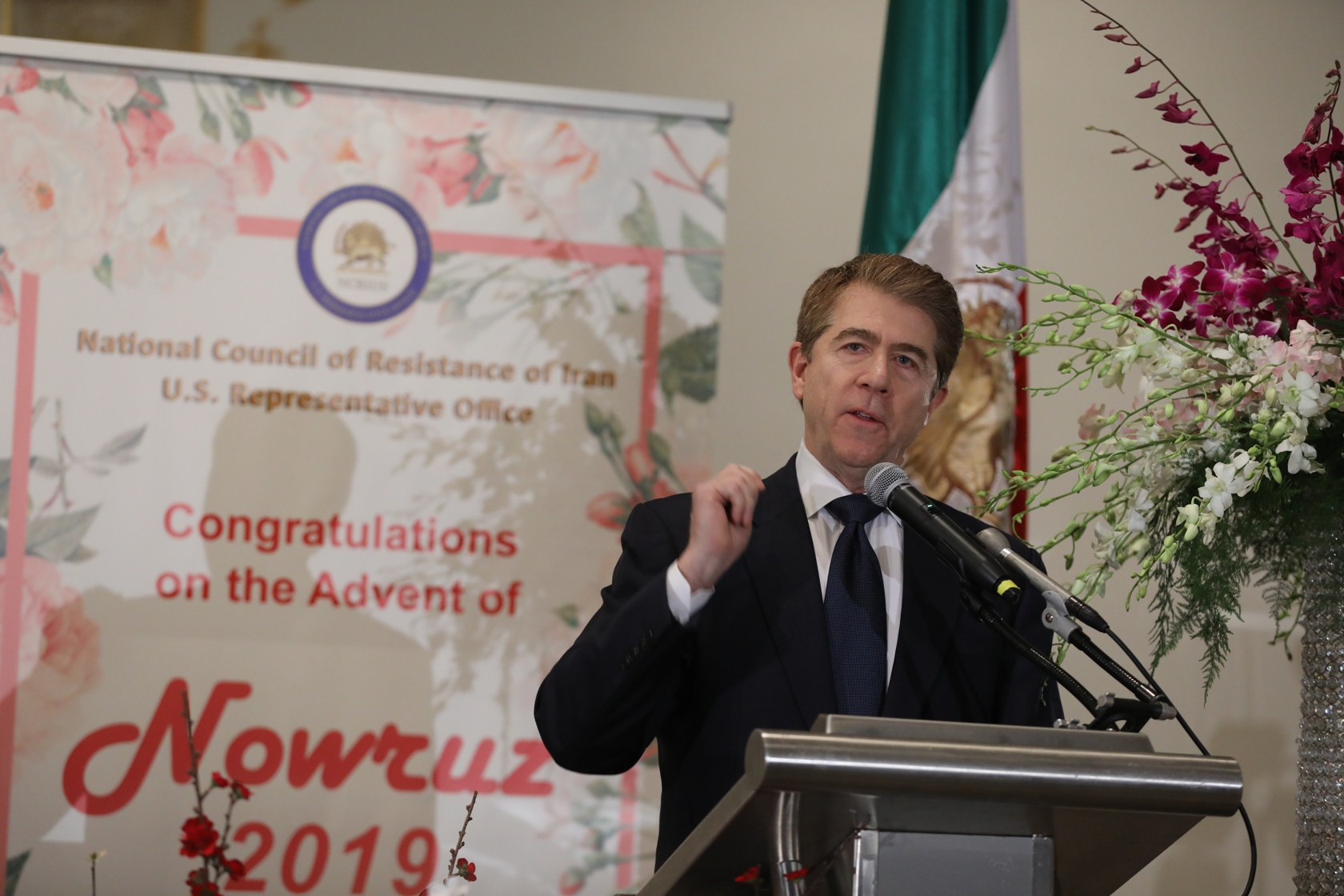 Kenneth Blackwell, former U.S. Ambassador to the United Nations Human Rights Commission, stressed, "There is a new burst and a new energy and a new yearning for freedom in the country and I am so delighted to be a part of that push for freedom, along with my colleagues and friends at the NCRI and MEK. As we start a new year in this springtime, we are here to rededicate ourselves to supporting, to inspiring those who want a free and democratic Iran." 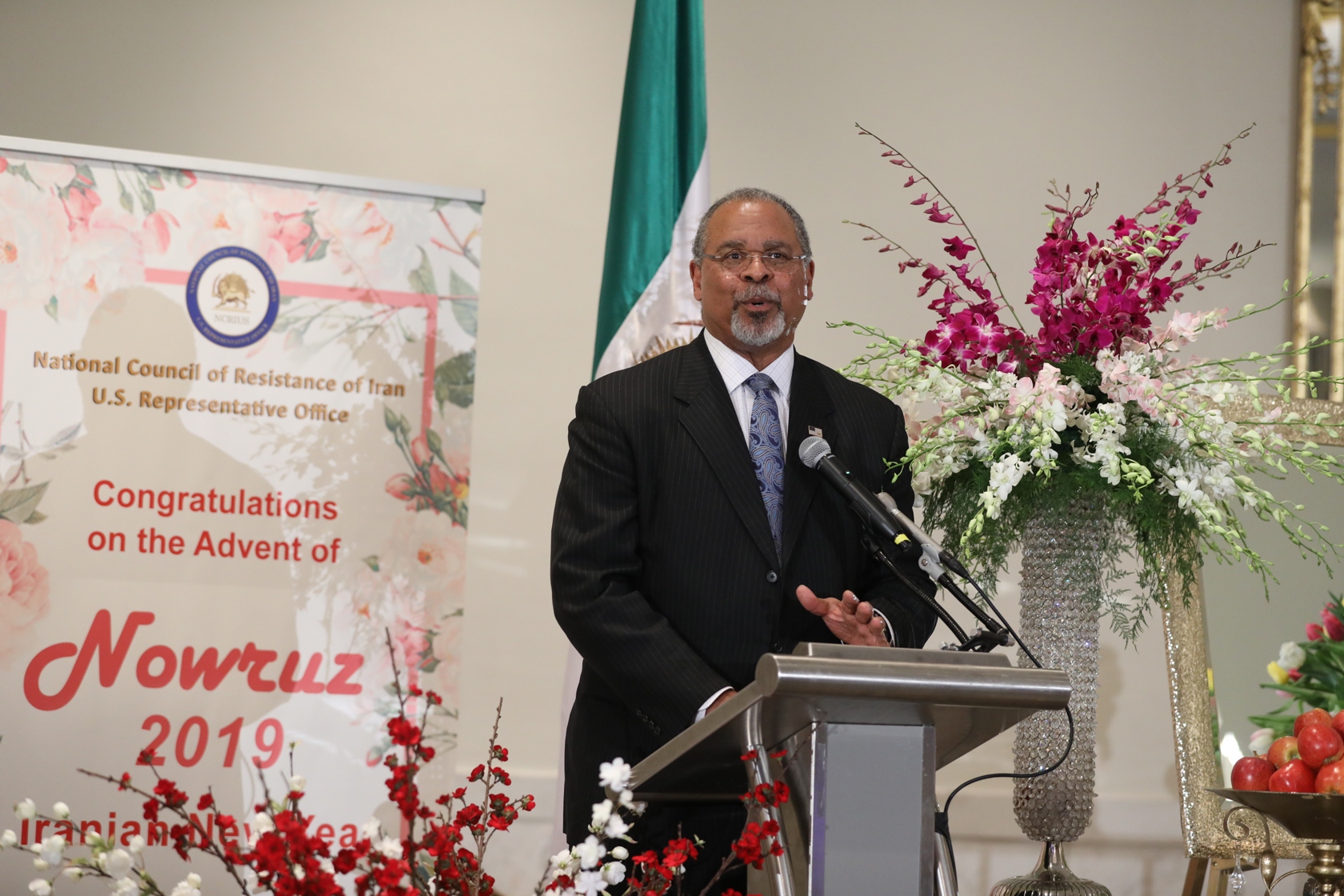 "What has become clearer than ever over the last 12 months is that the Iranian people want change," former U.S. Ambassador to Bahrain and Deputy State Department Spokesman Adam Ereli noted. "The very simple fact of the matter is, the Iranian regime has lost its legitimacy among the people of Iran, and they know it. And they know that popular groups like NCRI and the MEK have that legitimacy, which is why they are committed to crushing you and silencing you and killing you. They know you are not going to go away. They know you have support. And they know their days are numbered." 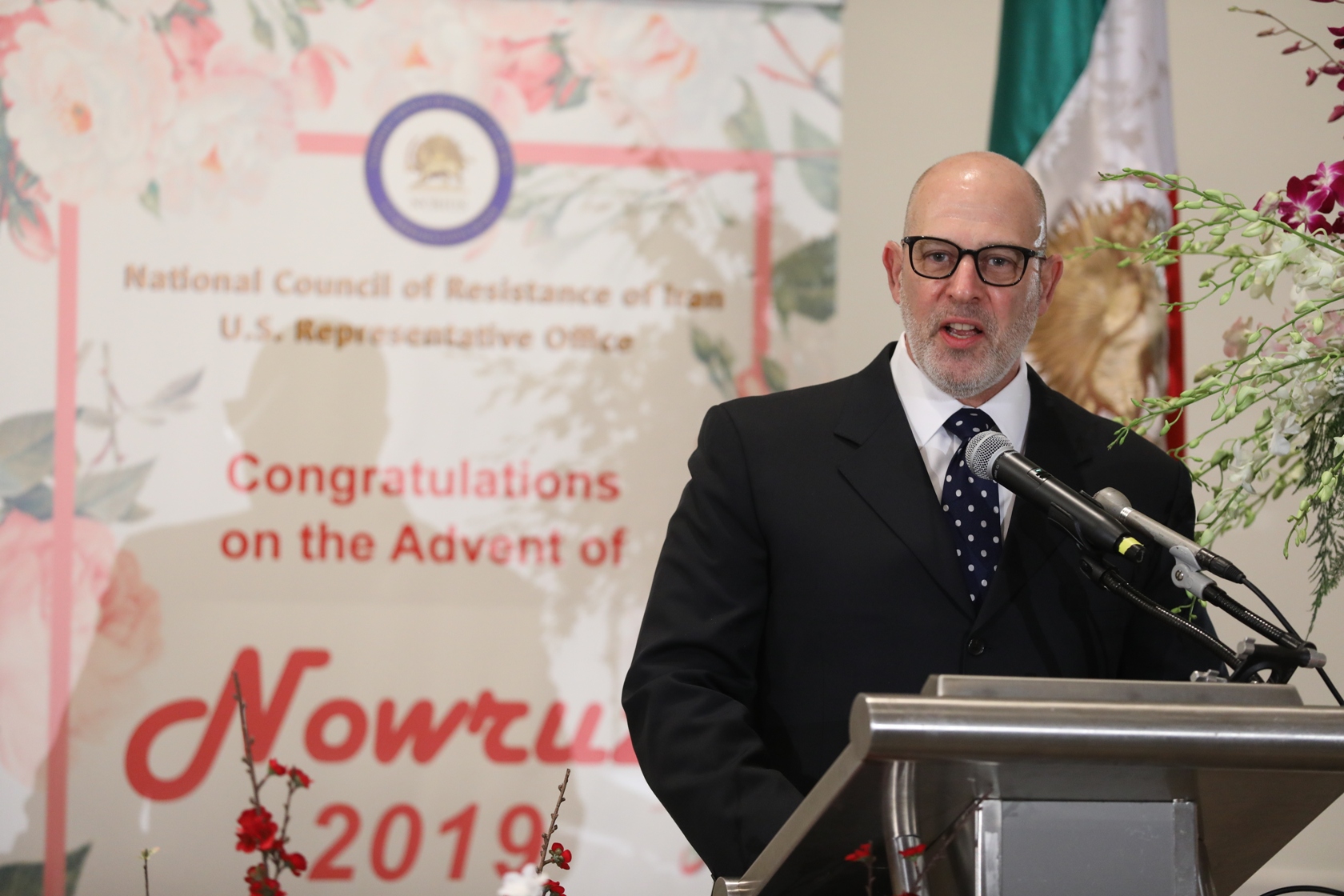 Col. Wes Martin, former Senior Anti-terrorism and Force Protection Officer for all Coalition forces in Iraq, said: "There is evil in Iran and there are people doing something about it. The National Council of Resistance of Iran and the Mujahedin-e Khalq, you are doing something about it. You are truly the heroes, who have taken the fight to Tehran and you are going to see it through. 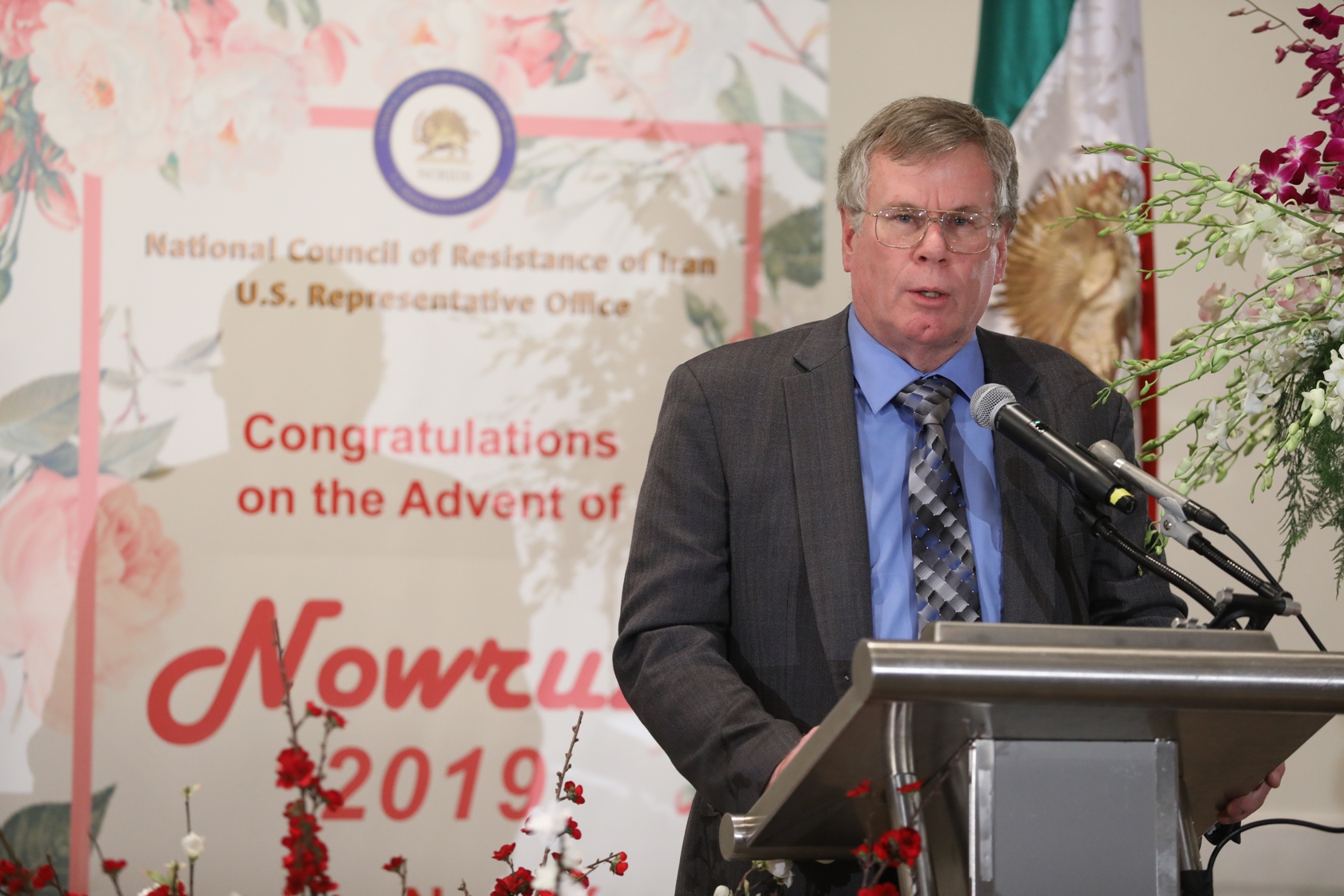 "People look at what's been done at Ashraf 3 and they're amazed. I'm not amazed because I worked with them. I know what they can accomplish… Residents of Liberty, residents of Ashraf, and Ashraf 3, you are the shining light in the darkness, and you are casting that light throughout the world. And the day will come when that light will extend throughout Iran," Col. Martin predicted.

LTC Leo McCloskey, former Commander of the Joint Inter Agency Task Force in Iraq, agreed: "They [MEK] have stood as a beacon of light wherever they go for the people of Iran. And those living in Iran now should know that they will always be around and always be there, anticipating the day that they can return to their great country." 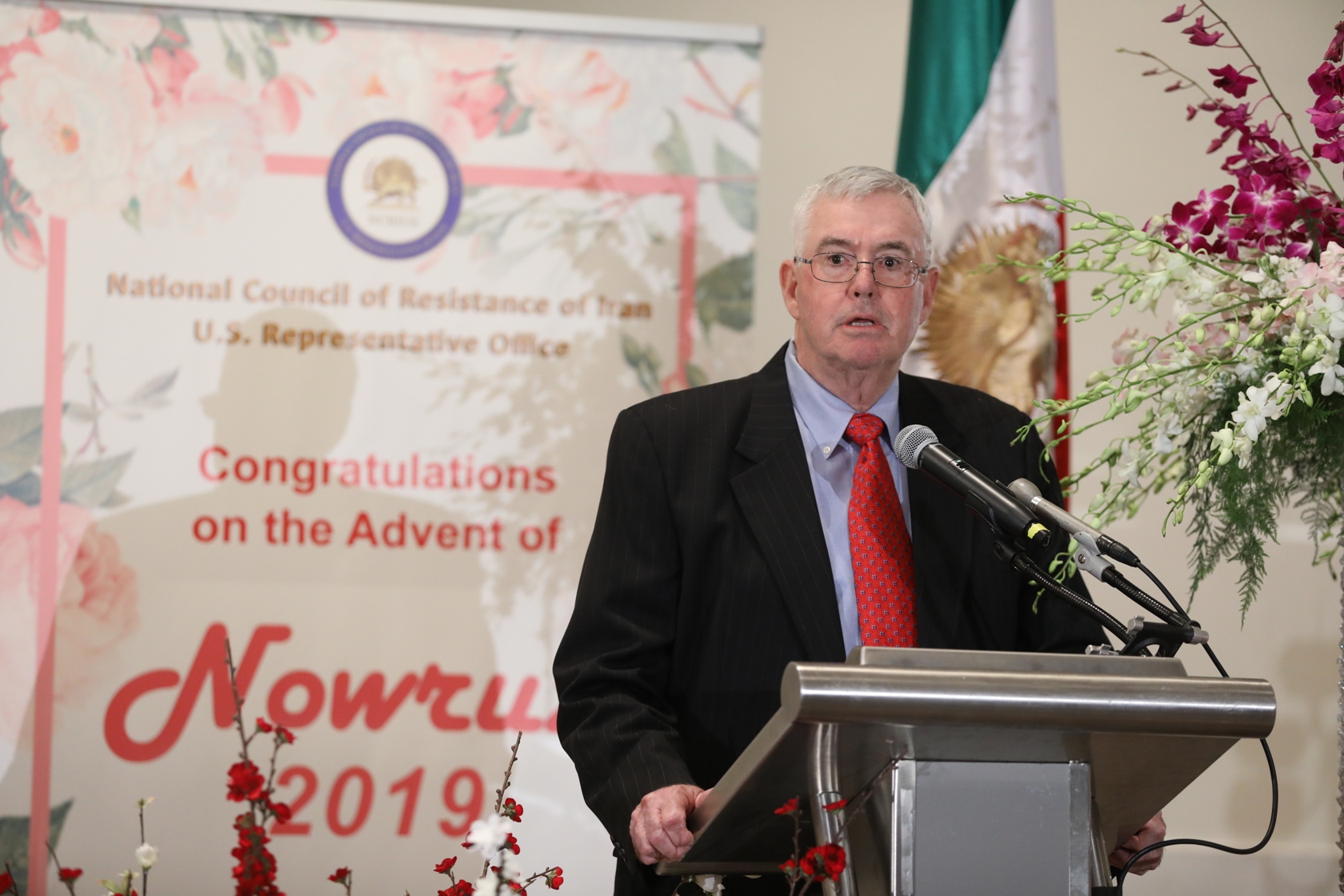 Prof. Ivan Sascha Sheehan, Executive Director of the School of Public and International Affairs at the University of Baltimore, said, "I am surrounded tonight by a bipartisan group of former senior U.S. officials, prominent academics, and statesmen from around the world who uniformly agree that there is no need to fear the prospect of regime change in Tehran," adding, "Never have I been more hopeful that the tide is turning and that Tehran's 40-year dictatorship can be replaced by a peaceful, inclusive, tolerant government that upholds human rights and gender equality and maintains positive relations with its neighbors." 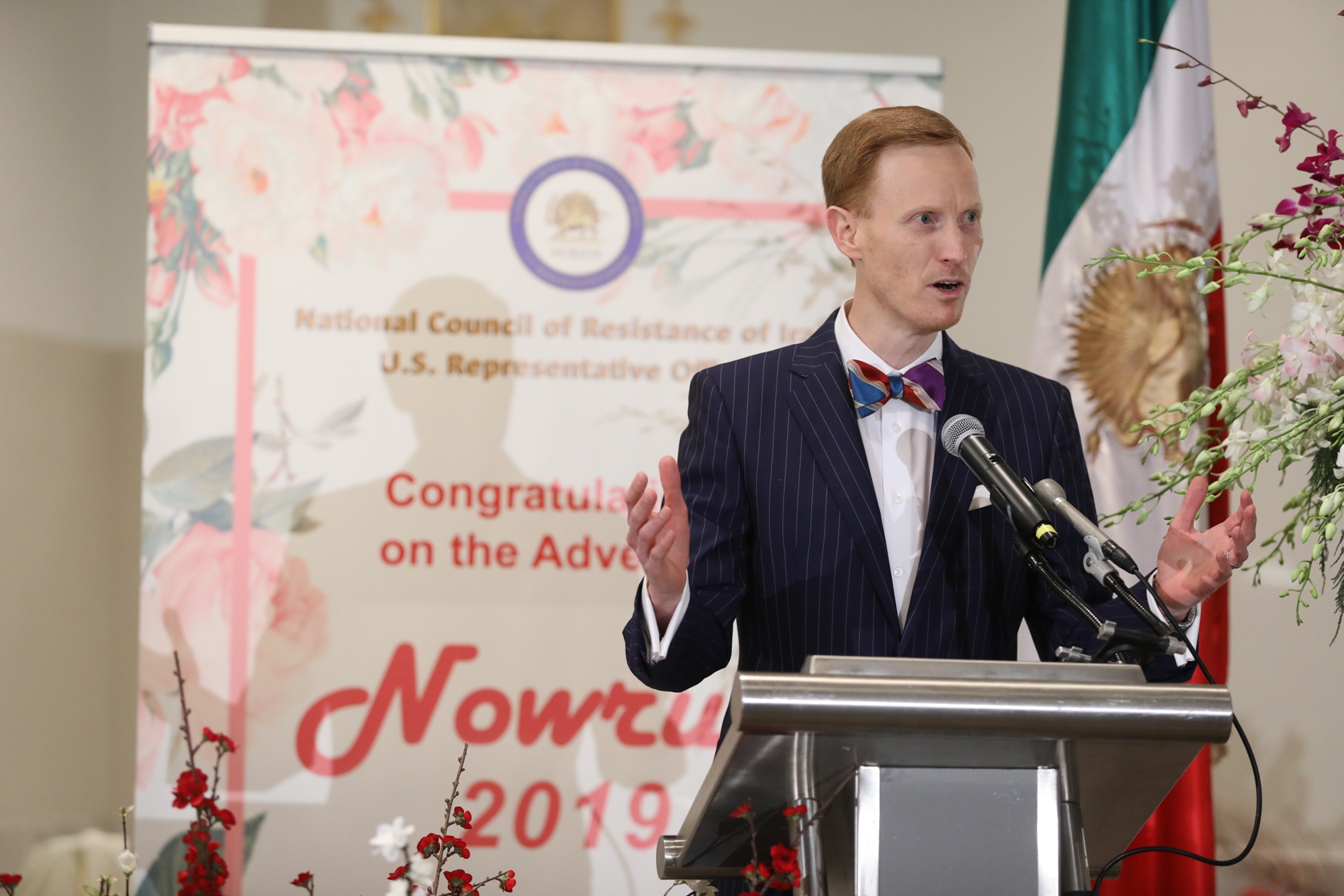 "The fact that the Supreme Leader has attributed the mass protests to the MEK is a sign of the changing times," underscored Prof. Sheehan. "In this new year, we must say to Tehran's clerical rulers, with one voice, that their longstanding commitment to exporting fundamentalism and terrorism and their efforts to destabilize the Middle East will not be tolerated any longer. We must commit to paying attention to the democratic aspirations of the Iranian people."

Ambassador Joseph R. DeTrani, former Special Envoy for North Korea, stressed, "What you represent is freedom. What you represent is change for the people in Iran… To see the theocracy doing what they're doing now, it's repulsive. It goes against the Iranian people, your history, your culture. So please continue the work you're doing, because you will succeed. You represent good. You represent the change that's necessary." Ambassador DeTrani added, "What you've been able to do to educate the United States as to what Iran was doing with their nuclear and missile programs, we owe you a great gratitude. So keep up the good work." 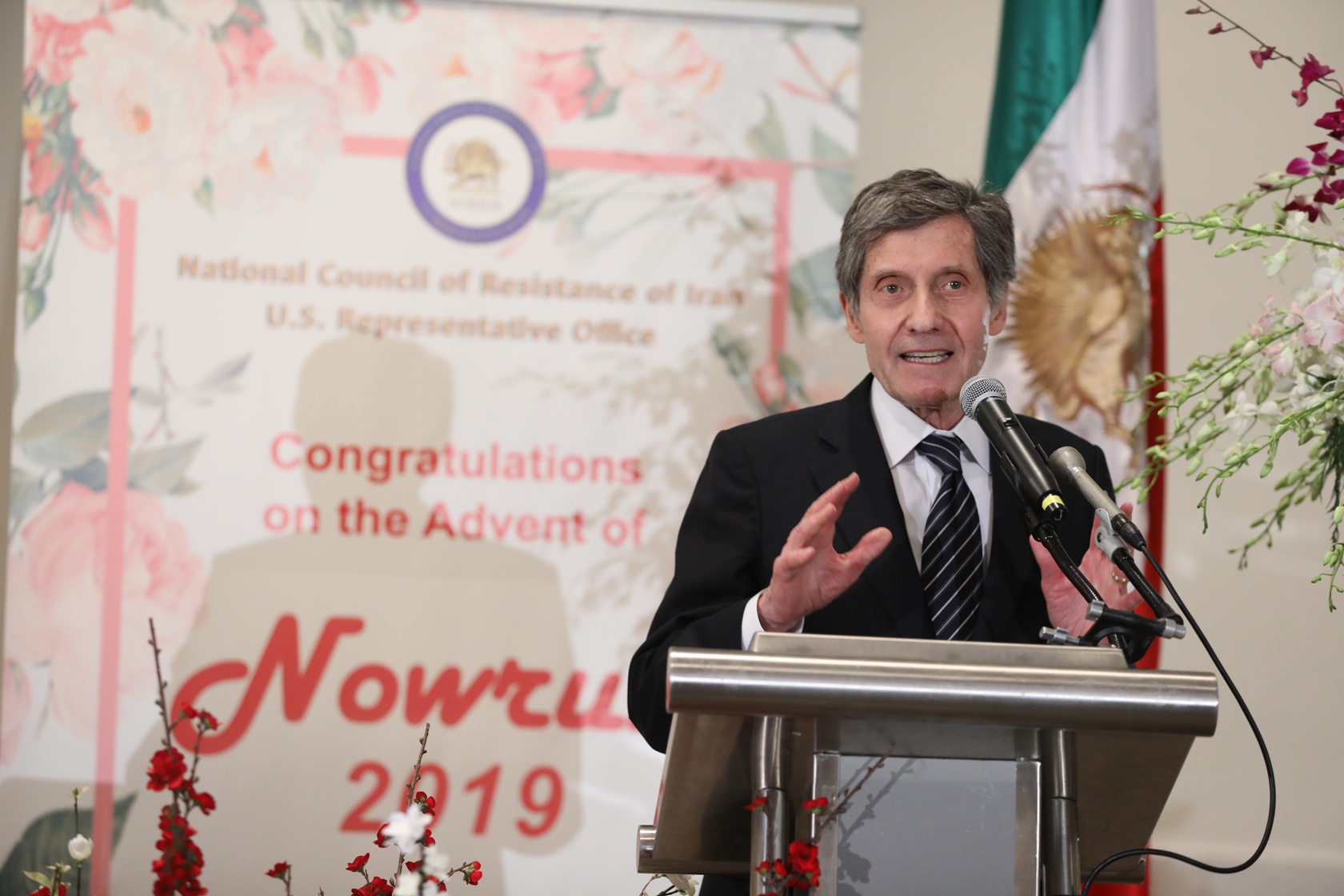 Prof. Raymond Tanter, Professor Emeritus at Georgetown University and former senior staff at the National Security Council, stated, "The U.S. Treasury Department designated 14 Iranian individuals and 17 entities associated with developing weapons of mass destruction… most of these entities were outed, if you will, as a result of the work of the National Council of Resistance of Iran, to its credit." 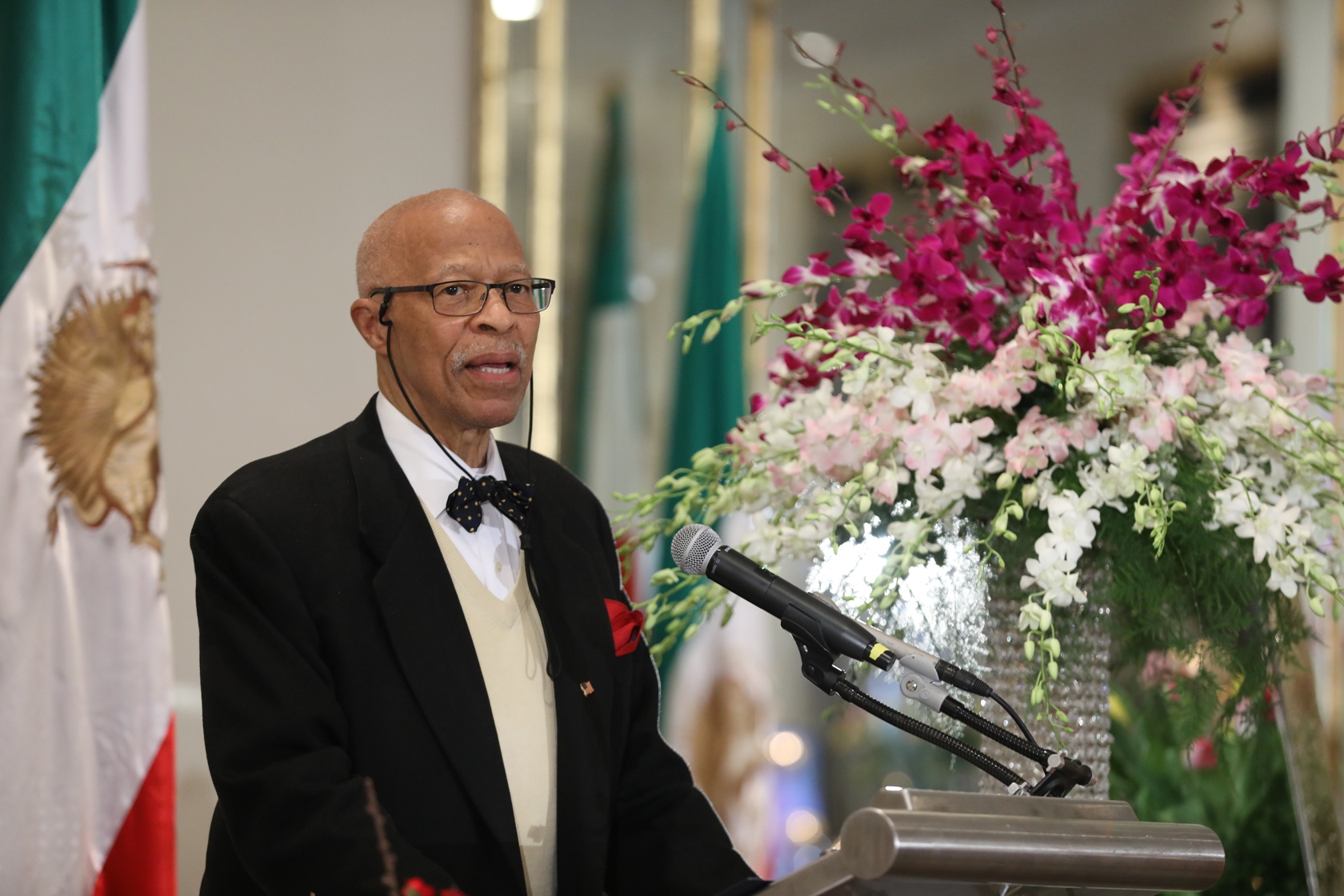 "The protests come from the Iranian people," added Prof. Tanter. "Again, the National Council of Resistance of Iran's largest component, the People's Mujahedin Organization of Iran, plays the main role in backstopping the demonstrations…. The way forward is for President Trump to increase his support for the Iranian people as they seek regime change, so that the sanctions and the protests work hand-in-hand." 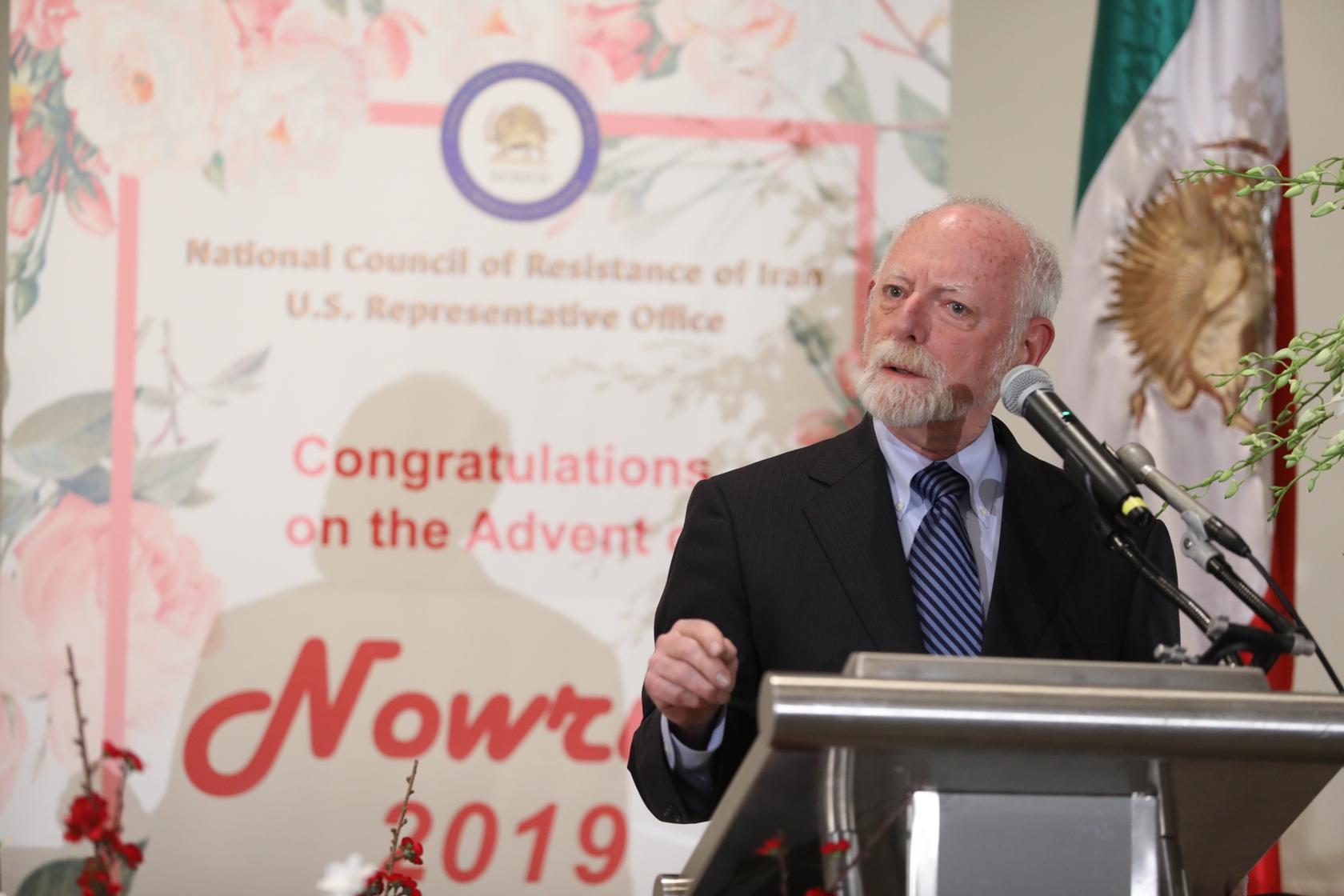 Bruce McColm, the former Executive Director of Freedom House said, "The rebellion is so extensive that there's no functional institution that the regime can count on… So, for this happy spring, I want to say I'm in solidarity with you… You ought to be proud of yourselves, you've done a great job in the strength you show and the solidarity you show with your brothers and sisters abroad. And hopefully, hopefully we'll get to an Iran that is free and democratic." 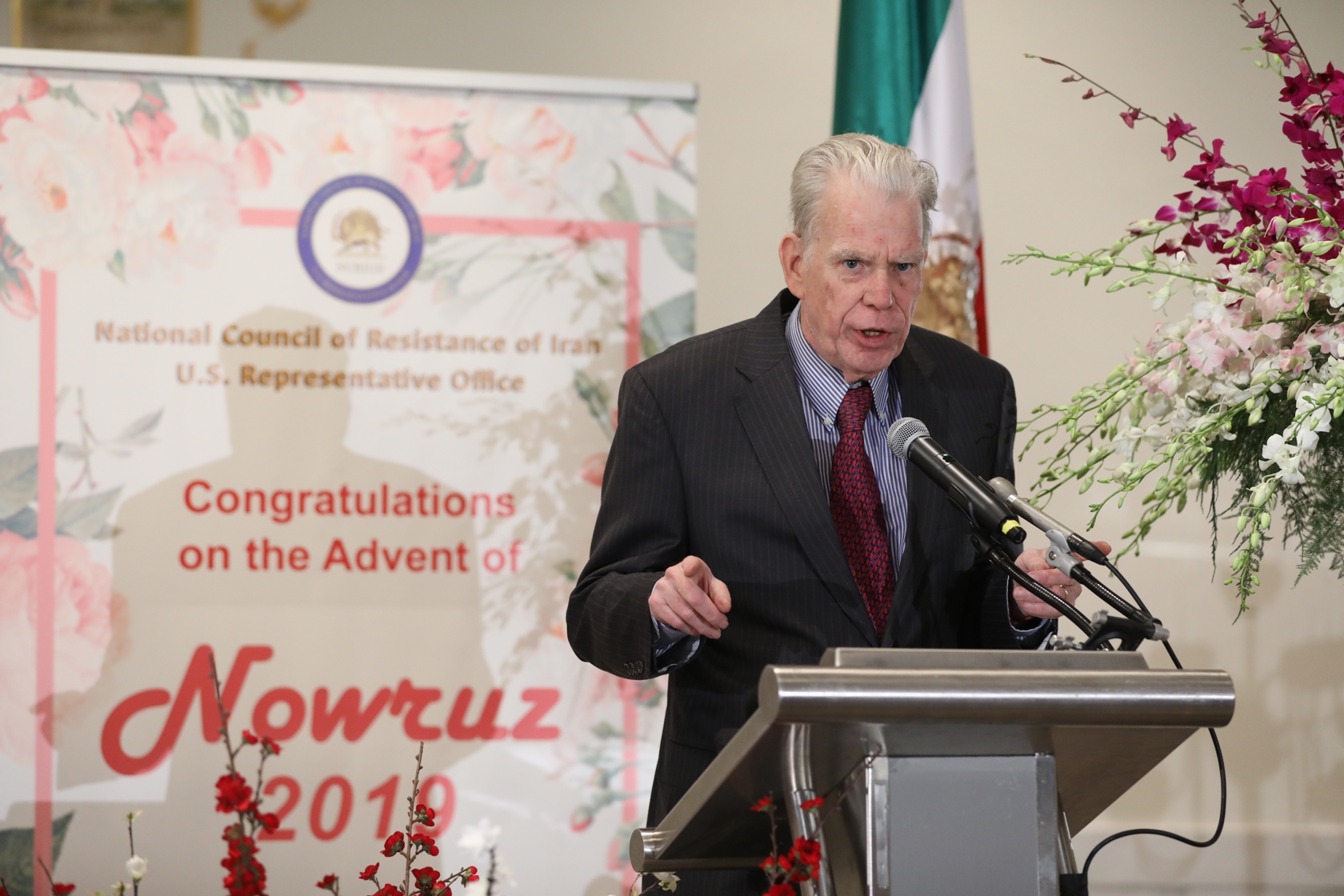 The Nowruz celebration concluded by another performance by Kharazian and her ensemble. 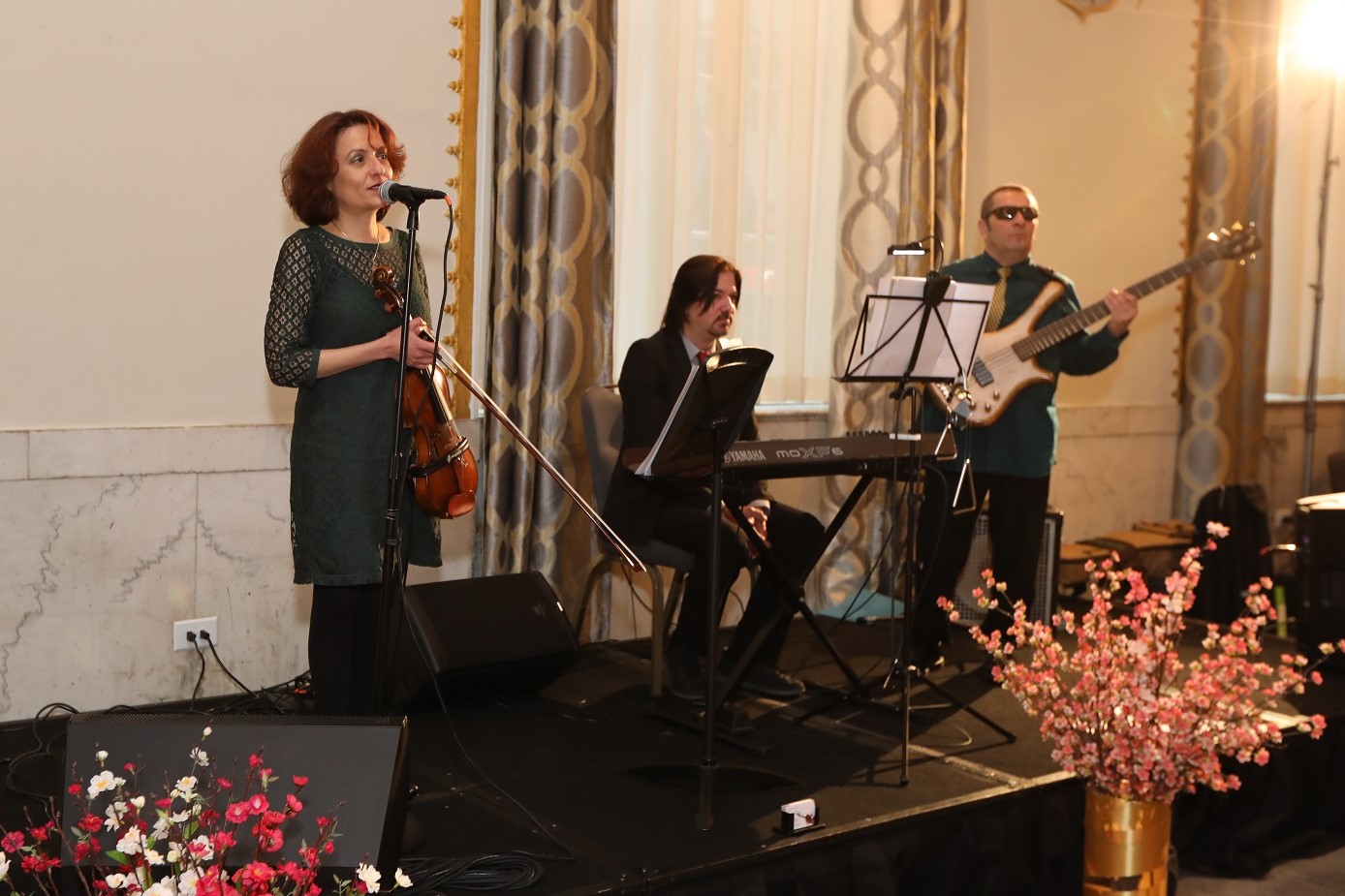 Christine Kharazian and her ensemble

These materials are being distributed by NCRI-US on behalf of the National Council of Resistance of Iran. Additional information is on file with the Department of Justice, Washington, DC.