Vancouver, British Columbia--(Newsfile Corp. - April 17, 2019) - Walker River Resources Corp. (TSXV: WRR) ("Walker" or the "Company") is pleased to announce that it has received a 2-year extension from the U.S. Bureau of Land Management (the"BLM") for its Notice of Intent (the"NOI") exploration permit to conduct further drilling on the Lapon Canyon Gold Project, located approximately 60 kilometres southeast of Yerington, Nevada.

The NOI exploration permit with the BLM covers the disturbance areas created to establish drill road access and drill sites within the Lapon Canyon Project. The Company, when possible, attempts to drill multiple holes from single drill pads on existing roads to minimize the amount of surface disturbance created by drilling activities. This practise has allowed the Company to drill many more holes under a NOI than would be possible if each drill hole was drilled from a single drill site. The Company has secured the required bonding to cover reclamation on the areas of permitted disturbance for the 2019 drill program. The Company can amend the NOI exploration permit over the next 2 years to increase the permitted disturbance areas for additional drill sites and access roads at the Lapon Project.

At this time, the Company has planned for an additional 30-hole drill hole program on the project with preparation for drill mobilization and start up well underway.

Michel David, President & CEO of the Company says, "We are very pleased that the BLM has extended the Notice of Intent permit for the next 2 years. This will provide the Company with the ability to continue to drill the Lapon Canyon Project, without any permitting delays. In many instances, we have been able to drill multiple holes from each permitted drill site, maximizing our permitted and bonded drill sites without exceeding our permitted disturbance amounts." Mr. David continues: "Planning of the upcoming 2019 Exploration and Drill Programs is almost complete. We are now fully permitted for the upcoming 2019 exploration and drill programs that will begin shortly."

The 2018 drill program was successful in expanding known gold mineralized zones previously discovered by the Company, including the discovery and delineation of new gold mineralized zones. The drilling also was designed to acquire technical and geological information on the structural trends. This was essential, in the preparation of the up coming 2019 drill program, for planning of drill pad emplacement and drill access routes.

The Company's consultant, Fladgate Exploration Consulting Corp. ("Fladgate") of Thunder Bay, ON., (see news release 02-28-18) a full-service mineral exploration consulting firm, has completed its interpretation, compilation and update of the Lapon Project's digital database with the 2018 drill results. Fladgate's initial interpretations of the Lapon digital database enhanced the planning, design and success of Walker's late 2018 drill program. The information from the compilation and interpretation of the 2018 drill program will greatly aid in acceleration of drilling, geological mapping and understanding of the gold mineralization at the Lapon Project.

Planning of the upcoming 2019 Exploration and Drill Programs is nearing completion. The drill program is scheduled to begin during the first week of May. Further updates on the Lapon Project will be released as they become available.

Finally, the Company wishes to welcome Mr. Yves Caron, geol (OGQ), M.Sc. to its advisory board. Mr. Caron has extensive experience in exploration and development of precious and industrial metal projects. Yves has also been a board member of several active exploration companies with advanced projects.

The Lapon Project consists of 96 claims (1,940 acres) situated in the Wassuk Range, easily accessible by secondary state roads from the main highway (25 kilometres). A state grid power transmission line passes within three kilometres of the Lapon Project. The Lapon Project is located within the Walker Lane shear zone, a 100-kilometre-wide structural corridor extending in a southeast direction from Reno, Nevada. Within this trend, numerous gold, silver, and copper mines are located, notably the historic Comstock Lode mines in Virginia City. Also, the past producing Esmeralda/Aurora gold mine, with reported production of some one million ounces and the Anaconda open pit copper mine in Yerington, Nevada.

The Lapon Project is cut by a series of steeply dipping cross fault structures cutting across the Walker trend, analogous to other cross fault structures responsible for many gold and base metal deposits in the world. These faults are heavily sheared and altered (sericite, iron oxides) with abundant silica, varying in width from 60 to 300 meters. Four of these structures have been discovered at Lapon, and at least two can be traced for over four kilometers.

Small-scale high-grade mining began on the project in 1914. Approximately 600 meters of drifts and raises were developed from two adits and a two-stamp mill was built. Further underground work was carried out, returning numerous assay values in the range of one ounce per ton, with a sample at the end of an adit returning 20.6 ounces per ton. (National Instrument 43-101, Montgomery and Barr, 2004). Additional work on the Project in the following years, included the installation of a ball mill and milling facilities.

The scientific and technical content and interpretations contained in this news release have been reviewed, verified and approved by E. Gauthier, geol., Eng (OIQ) a director of the Company, and a Qualified Person as defined by NI 43-101, Standards of Disclosure for Mineral Projects.

/NOT FOR DISTRIBUTION TO U.S. NEWS WIRE SERVICES OR FOR DISSEMINATION IN THE UNITED STATES/

To view the source version of this press release, please visit https://www.newsfilecorp.com/release/44130 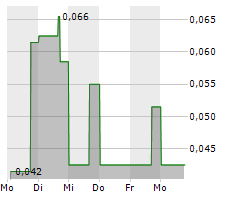