Newly adorned with their prestigious third star from 2018 - a first for Sweden - this only further affirmed their presence in the world of gastronomy.

The unveiling of this year's list remained equally dispersed across Europe, with no single country dominating the prestigious top 10. Schloss Schauenstein, Switzerlandnarrowly missed out on coming first for a second year running sliding into second place. Asador Etxebarri, Spainon the other hand, held firmly onto their third best spot from 2018, proving that the simple but refined art of grilling.

L'Arpège from France and Restaurant Quique Dacostafrom Spain are yet to be seen absent from the top 10 since the first ever 2013 list and their incredible achievements have been recognised by this year's Five Consecutive Years in the Top 10 awards.

Newcomers have likewise been given the spotlight this year with Restaurant Barr from Denmark being crowned Best New Restaurant.

Lido 84 Italy and Daniel Berlinfrom Sweden made huge leaps from 2018, jumping from 21st and 29th to 10th and 5th place respectively,

Noma from Denmark have also made a bold comeback with Noma 2.0's first appearance on the lists by landing in ninth place this year. Others on the top 10 include: La Marine from France andLe Calandrefrom Italy.

Steve Plotnicki, OAD founder, says 'From the acknowledgement that Bjorn Frantzen's restaurant deserves to be named the number one restaurant in Europe despite being open for a mere 18 months, to the long list of wonderful new restaurants making their debut on the list, the OAD reviewers have once again demonstrated that they are at the forefront of the European fine dining scene."

Images of the event 20th May:

Each year, OAD shares lists of the top restaurants within various global regions, as voted for by the website's knowledgeable reviewers. Based on reviews by over 6,000 voters, the list is the only global restaurant guide that considers a diner's background and reviewing experience, as well as the quality of restaurants they visit. 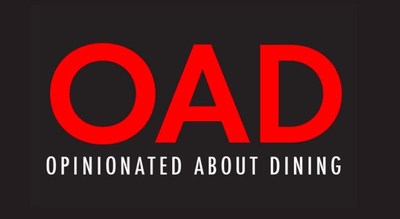