- Compelling trends shown on multiple disease-specific biomarkers and cognitive outcomes, most pronounced among a younger population

- Results suggest that vaccine could address one of humankind's most pressing, unmet medical needs

LONDON, Sept. 9, 2019 /PRNewswire/ -- AXON Neuroscience SE ("Axon"), an industry leading, clinical stage biotech at the forefront of treatment and prevention of Alzheimer's disease, has today announced the results of the Phase II trial for AADvac1, its first-in-class vaccine to slow down the progression of Alzheimer's Disease. 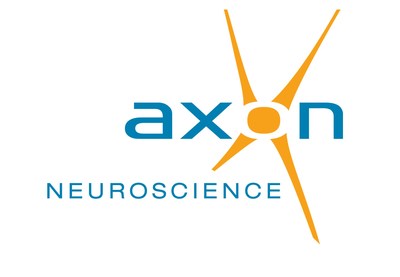 The Phase II ADAMANT trial was designed as a randomized, double-blinded, placebo- controlled trial in mild Alzheimer's Disease. The primary objective was safety, with secondary objectives to evaluate immunogenicity, efficacy on clinical outcomes and key biomarkers. Axon studied AADvac1 on 196 patients in eight European countries over 24 months, in order to prove the concept of disease modifying effect of the vaccine and to inform the design of future confirmatory studies.

For the primary endpoint, the ADAMANT trial showed that AADvac1 has proven to be safe and well tolerated, with no difference in the incidence and nature of adverse events between the treatment and placebo groups. No other safety signals emerged from any other safety or medical assessments. This confirms the overall benign safety profile of AADvac1, demonstrated in prior clinical trials.

Axon's vaccine is an immunotherapy, harnessing the body's immune system to produce specific antibodies. In the Phase II trial, the treatment was shown to be highly effective in inducing a robust immune response, with 98.2% of patients generating antibodies against pathological tau. The finding is consistent with previous observations in the Phase I trial and support excellent immunogenicity in this population.

A highly statistically significant impact was seen on neurodegeneration and neuronal loss, as measured in blood by Neurofilament Light Chain ("NfL"). It showed a marked slow-down of the expected increase of NfL in the patients treated with AADvac1, demonstrating a 12.6% change from baseline over two years versus 27.7% for patients on placebo (p value = 0.0039). This indicates that AADvac1 slows the progression of the neurodegenerative process to levels that are more typically seen in healthy individuals[1].

NfL is a biomarker to track and monitor effects on neurodegeneration in patients with Alzheimer's Disease, Multiple Sclerosis and other neurological disorders.

Compelling trends were observed in the reduction of three separate cerebrospinal fluid ("CSF") Alzheimer's Disease specific biomarkers in treated patients, including two variants of pathological tau (phospho-Tau181 and phospho-Tau217). Despite of a smaller sample size of patients providing required lumbar punctures, the shown effect sizes were large to moderate. This strongly suggests that AADvac1 is successful in slowing the progression of tau pathology.

Positive signals for cognitive endpoints were observed among younger populations in the Phase II trial. These were showed on clinical outcome measure CDR-SB and consistently further across a wide range of additional endpoints including MMSE, ADCS-MCI-ADL, MRI brain volumetry and DTI.

Clinical Dementia Rating - Sum of Boxes, Mini Mental State Examination and Activities of Daily Living are widely accepted clinical outcome measures to asses cognitive and functional decline in Alzheimer's Disease, while Magnetic Resonance Imaging and Diffusion Tensor Imaging are biomarkers that track the level of brain atrophy and damage, which are associated with the progression of the disease.

Based on the extensive learnings and positive data generated by the Phase II ADAMANT trial, Axon is moving ahead with plans for the upcoming clinical development. Axon is now seeking an experienced, global partner to help plan and conduct the next phase of clinical trials in order to rapidly bring the benefits of the therapy to a wide ranging and growing patient population.

"Today's results mark an important milestone for Axon, and for the entire population of the world that suffers from this devastating disease. Our vaccine is the first to solely target pathological tau proteins, which drive the cognitive decline and memory loss seen in Alzheimer's. These results, which strongly reveal a disease-modifying effect on the disease, underpin our confidence to take the next steps in bringing a life-changing treatment to patients as soon as possible."

"I am excited to see that AADvac1 is safe and well tolerated and shows impact on the neurodegenerative process of Alzheimer's Disease. The positive trends on both clinical and biological measures give me hope that this treatment brings benefit to patients in the future."

- Philip Scheltens(Professor of Cognitive Neurology and Director of the Alzheimer Centre at the Amsterdam University Medical Centre, Chairman of the Scientific Advisory Board of Axon.)

"Since AADvac1 targets pathological tau, I am truly impressed by the downstream effect on neurodegeneration indicated by the neurofilament findings. This effect, observed for the very first time in an Alzheimer's trial, is a significant and much needed boost for the industry."

- Kaj Blennow (Head of Research on Neurochemical Pathogenesis and Diagnostics at the University of Gothenburg. He has pioneered the development of CSF and blood biomarkers for Alzheimer's disease.)

Axon Neuroscience was founded in 1999 and is now the single biggest team in the world dedicated exclusively to tau research in relation to treating Alzheimer's Disease, with over 60 scientists and 15 senior scientific leaders.

Axon was founded by Professor Michal Novak, who started his research in the late 1980s at Cambridge with Nobel Laureates Klug, Milstein and Walker, discovering tau as the structural constituent of neurofibrillary tangles, a major hallmark of Alzheimer's disease. He was the first to make the link between pathological changes of tau and Alzheimer's disease, proposing tau as a valid target. Professor Novak and Axon have since pioneered the implementation of tau therapy.

Alzheimer's Disease has been growing in prominence globally ever since it was first identified in 1906. Currently 35 million people suffer from Alzheimer's worldwide; it is the 6th leading cause of death in the US; and is set to almost double in 20 years.

Axon Neuroscience's vaccine AADvac1 has the potential to be a huge scientific breakthrough for humankind, meeting one of the world's most critical unmet medical needs.

Axon Neuroscience is on a mission to eradicate Alzheimer's disease by developing tau-based treatments, which shall halt the disease and relieve the symptoms in sufferers, as well as prevent the onset in potential victims.

Axon was founded in 1999 by Professor Michal Nova´k, who started his research in the late 1980s at Cambridge with Nobel Laureates Klug, Milstein and Walker, discovering tau as the structural constituent of neurofibrillary tangles, a major hallmark of Alzheimer's disease. He was the first to make the link between pathological changes of tau and Alzheimer's disease, proposing tau as a valid target. Professor Novak and Axon have since pioneered the implementation of tau therapy.

The company has a scientific team of over 60 scientists and 15 senior scientific leaders, with over 500 cumulative years' experience in Alzheimer's, is the single biggest team in the world dedicated exclusively to tau research for over 20 years.

About Tau and Tau vaccine AADvac1

Tau proteins play a vital role in the healthy, normal functioning of a brain. The disease starts when normal tau proteins become pathological by truncation (i.e. the process of pathological truncation makes them 'unhealthy' - completely changing their structure and function). Unhealthy tau are prone to attaching to each other, creating clumps which spread through the brain, causing the disease. The distribution of these clumps shows strong correlation with clinical symptoms in patients.

Axon has developed a vaccine AADvac1, which is the most clinically-advanced tau therapy in development. It uses the body's own immune system to induce the production of antibodies that specifically target unhealthy tau.

It differs from other tau-based research by tackling both the formation of 'unhealthy' tau clumps and the spread of those clumps already formed. The rest of the industry has been focused primarily on the latter. In addition AADvac1 has been proven to successfully discriminate between normal and unhealthy tau, ensuring only the latter are targeted. In this way, Axon's treatment is more accurate and safer.

Axon's vaccine can tackle Alzheimer's disease even in its pre-symptomatic stages, which can start 10 to 20 years prior to the onset of first clinical symptoms - this is a potentially life-changing prevention for patients who would otherwise be destined to suffer at the hands of Alzheimer's.