"Compiling the extensive dataset that Sego has collected over the last few years has revealed some compelling new drill targets. The Empress zone is a large copper-gold anomaly that could be the source of the high grade mineralization at the adjacent Granby and Cuba zones. Trenching on the edge of the anomaly earlier in 2019 sampled 18m grading 0.96% copper and 0.31 grams per tonne gold," stated CEO J. Paul Stevenson. "Drilling this target along with the gold-rich porphyry target to the south and the new Sovereign zone will be a priority of the company in the coming months."

Drilling by Sego in recent years has defined mineralization at the Cuba and Granby Zone hosted in volcanic rocks but a porphyry source has not been identified. The area contains potassic and argillic alteration with locally high grade, structurally controlled mineralization, including previously reported holes: 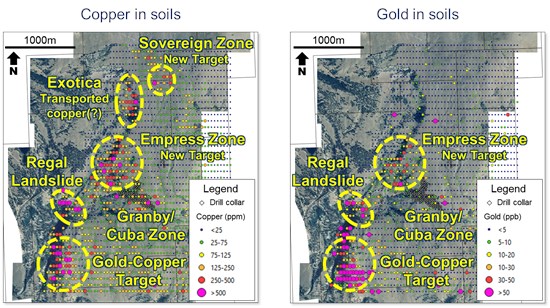 Immediately to the northwest is an approximately 500 metre by 600 metre copper and gold soil anomaly with supporting elevated molybdenum, silver, zinc, manganese and iron. This signature is typical of alkalic prophries in southern British Columbia. Further the zone has a complex magnetic signature with a central magnetic low, two bullseye magnetic highs (Figure 2) and occurs on the margin of a chargebility high. The relationship of magnetite alteration with copper mineralization at Granby makes the proximal magnetic high an attractive target.

Towards the south of the property, another large zone with a gold-rich footprint is evident in the soil sampling. This area has been the focus of trenching in the past with gold and copper mineralization returning;

Six drill holes (four completed in 1969 and two by Sego) are drilled in the vicinity but not into the consistent gold, copper and molybdenum soil anomaly. These holes do not explain the source of the anomaly and the target remains to be effectively tested.

North of the Empress zone, a copper-only anomaly occurs on the downthrown side of the boundary fault. Unlike the Regal Landslide this has no supporting multi-element geochemistry and is likely to be formed due to oxidation and remobilisation of copper mineralization. 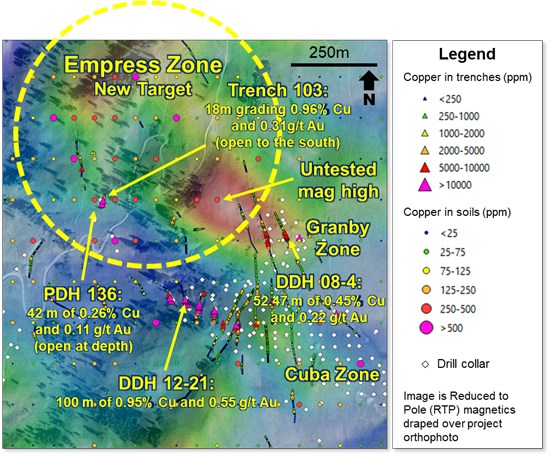 In the north of the property beneath a blanket of till cover is a copper, zinc, molybdenum with a weak manganese target that has never been prospected or drill tested. The anomaly occurs coincident with a well-defined magnetic low and represents another typical alkalic porphyry footprint.

This news release was reviewed and approved by Selina Tribe, Ph.D., P.Geo., a Qualified Person under NI 43-101.

To view the source version of this press release, please visit https://www.newsfilecorp.com/release/48739