VANCOUVER, BC / ACCESSWIRE / May 7, 2020 / MGX Minerals Inc. ("MGX" or the "Company") (CSE:XMG)(FKT:1MG)(OTC PINK:MGXMF) is pleased to announce an agreement to purchase a 100% interest in the Heino-Money gold deposit and Tillicum Claims (MINFILE 082FNW234 including Grizzley, Annie Flats, and Silver Queen occurrences, located approximately 12 kilometres east of Burton (110 km east of Kelowna), in the West Kootenay region of British Columbia. By issuing shares and cash totaling $5,000,000 CDN and completing a work program of $1,050,000 CDN over a three year term, MGX will acquire a 100% interest in the property with a Net Smelter Return to the Vendors of 5%, which may be bought back for $1,000,000 CDN. 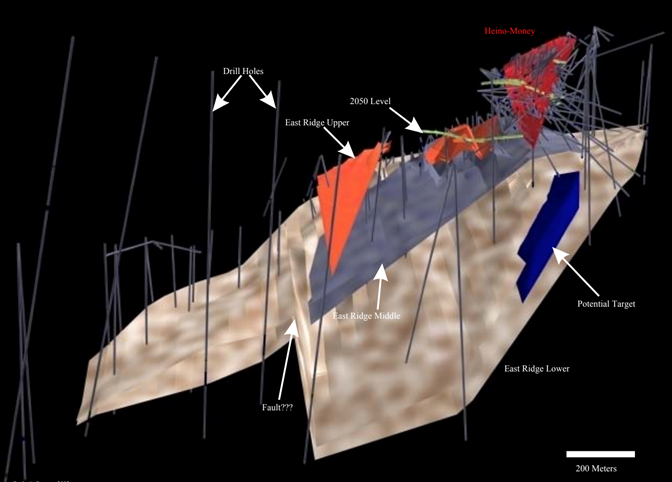 The East Ridge zone is 300 metres east of the Heino-Money zone. Gold mineralization occurs in a blanket-like zone that straddles the contact between porphyritic diorite and meta-arkose, quartzite, siltstone and minor argillite. The gold-bearing, near-vertical calc-silicate skarn structures occur within a 9.1 to 24.3- metre zone that strikes northeast and dips 70 degrees northwest. The skarn structures have widths that vary from 1.5 to 4.6 metres, but average 2.1 metres. The East Ridge zone has been traced by drilling for 1100 metres along strike and 365 metres down-dip at an average width of 1.5 metres. The East Ridge zone is comprised of two parallel upper skarn structures 0.9 to 1.5 metres thick and a lower skarn structure. Gold occurs in randomly distributed high- grade pockets separated by areas of lower grade material. Within the zone, gold-bearing sulphide mineralization consists of pyrrhotite, pyrite-marcasite, arsenopyrite, chalcopyrite, sphalerite, galena and native gold with traces

In 1989, Esperanza Explorations Ltd wrote a summary of the mineralization on the Heino-Money Zone (Property File 825275, Roberts, 1989):

The gold mineralization is contained in a near vertical skarn structure which averages about six feet in width and which, to date, has been delineated over a strike length of about 600 feet and a vertical extent of 300 feet. The mineralized zone remains open both on strike and to depth.

In 1993, Bethlehem Resources Corporation and Goldnev Resources Inc. optioned the property and

obtained a permit for an underground mining operation. Mining commenced in mid-August of that year

and was completed in late October. A total of 29,009m of surface and 3,865m of underground drilling for a total of 376 holes. In addition, underground development consisting of 1,374m in the Heino-Money zone and 410m in the East Ridge zone was completed. 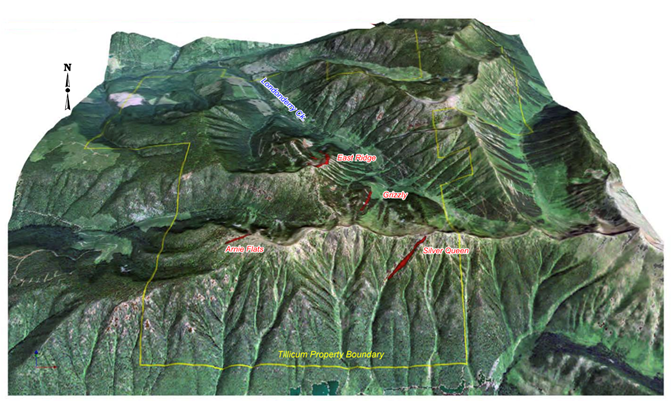 The Tillicum Mountain area is underlain by metamorphosed siltstone, calcareous siltstone, arkose, and wacke, with lesser amounts of basalt, tuff, argillite, impure carbonate and marble layers, that have been subjected to Lower Jurassic regional metamorphism and folding that predates the Middle to Upper Jurassic intrusion of the monzonitic stocks. This resulted in sillimanite- grade metamorphism throughout most of the Nemo Lakes Belt, however, the metamorphic grade is lower around Tillicum Mountain and resulted in the formation of biotite, muscovite, chlorite and amphibole. In addition to the regional metamorphism, the rocks were locally subjected to two episodes of contact metamorphism. The first is associated with swarms of dioritic sills that probably accompanied the regional deformation, the second is hornfelsing related to the intrusion of the large monzonitic stocks and postdates the regional deformation. The structure on the property is dominated by steep angle normal and reverse faults. Most faults have little offsets, however, several faults with major displacements divide the property into fault-bounded blocks. The metamorphic fabric of the rock closely parallels the bedding planes with minor or parasitic folding only very rarely observed. The Heino-Money zone is offset by a series of left-lateral, steep- angle, northeast- striking faults that have displacements of up to 9.0 metres. Within a 500 metre radius of the Heino-Money zone, three other significant mineralized zones have been discovered. These are the East Ridge zone, the Jenny zone and the Blue zone.

At the Heino-Money zone, strata-bound, gold-bearing, siliceous calc-silicate skarn alteration is hosted in a thin, wedge-shaped package of basaltic tuff and tuffaceous sedimentary rocks, which is bounded to the west by metabasalts and to the east by a large, altered feldspar porphyritic diorite body. The skarn is pinkish-green and is generally well layered with sub-parallel thin quartz veins and variable amounts of sulphides. The skarn assemblage includes quartz, tremolite-actinolite, clinozoisite, plagioclase, diopside, biotite, garnet and microcline, with minor amounts of sericite and carbonate. Free gold occurs as fine to coarse disseminations and fracture fillings within and along walls of the quartz sulphide veins; gold is generally associated with pyrrhotite, pyrite, galena and sphalerite. The zone is cut by north-trending, steeply dipping lamprophyre dykes, which postdate both the skarn development and sulphide mineralization. A polished section study of this mineralization shows that gold grains are generally free, but may also be intimately associated with pyrrhotite, arsenopyrite, sphalerite and pyrite-marcasite. Some pyrrhotite grains are rimmed with colloform pyrite-marcasite while others contain small masses of hematite and graphitic material. Minor to trace amounts of tetrahedrite, chalcopyrite and possibly electrum also occur. Polished thin section studies and geochemical studies suggest that the mineralizing process at the Heino-Money zone involved two phases of precious metal deposition. The first phase included the introduction of gold, arsenopyrite and possibly sphalerite, accompanied by the crystallization of quartz, carbonate and calc-silicate minerals. This was followed by the deposition of argentiferous galena and the continued introduction of arsenopyrite and sphalerite. Gold and silver-bearing horizons are present in the skarns at the Heino-Money zone but they do not occur together.

The Silver Queen Crown Grants are underlain by highly deformed Triassic and older volcanic and sedimentary rocks of and younger aplite and feldspar porphyry dikes, and granitic intrusions. Locally, impure tuffs and sandy sediments, striking east to north east and dipping steeply south to west, have been intruded by numerous dykes. An open cut at a point 50 metres down the southern slope, at an elevation of 2350 metres, exposes a carbonate band, approximately 1 metre wide, in these sedimentary rocks that hosts concentrations of pyrite. The gold and silver mineralization is associated with various dykes and sills and the mid-Jurassic Goat Canyon granitic stock. A 10-metre shaft at 2,100 metres elevation and an adit 100 metres to the south west develop similar occurrences. The main adit is driven north east for 35 metres then turns north for approximately the same distance before ending in aplitic granite. The adit is principally in limy and garnetiferous greenstone. Mineralization has been traced over a strike length of 950 metres. Drilling on the zone has identified several 20- metre thick mineralized skarn zones hosted in a 30- metre wide sequence of impure calcareous quartzites, siltstones and thin marble beds marginal to feldspar porphyry sills. Sulphide mineralization consisted of pyrite, pyrrhotite, tetrahedrite, sphalerite, galena, pyrargyrite and arsenopyrite. Alteration minerals include quartz, tremolite, actinolite and anhedral garnet.

(a) The Purchaser agrees to pay to the Vendors cash payments totaling $2,000,000 for the 90% Consideration under the following schedule:

(b) The Purchaser agrees to issue 20,000,000 common shares of the Purchaser, at a deemed price of $0.10 per share, to the Vendors, and together with Initial Cash Payment, for the 90% Consideration under the following schedule:

The Company will complete a N.I. 43-101 Technical Report within 45 days and will seek to verify data and previous work. All work prior to the implementation of N.I. 43-101 was completed by qualified professionals of their day and is believed to be accurate, but is not N.I. 43-101 compliant. The Company is currently seeking final exchange and corporate approvals.

Andris Kikauka (P. Geo.), Vice President of Exploration for MGX Minerals, has prepared, reviewed and approved the scientific and technical information in this press release. Mr. Kikauka is a non-independent Qualified Person within the meaning of National Instrument 43-101 Standards.

MGX Minerals invests in commodity and technology companies and projects focusing on battery and energy mass storage technology, extraction of minerals from fluids, and exploration for battery metals, industrial minerals, and precious metals.