VANCOUVER, BC / ACCESSWIRE / May 11, 2020 / George Sookochoff, CEO/President of Belmont Resources Inc. (TSXV:BEA)(Frankfurt:L3L2) ("Belmont"), (or the "Company") is pleased to announce that it has signed a Definitive Agreement ("the Agreement"), dated May 7, 2020 with Forty Ninth Ventures Ltd. (the "Vendor") for the Company to acquire a 100% interest in the Vendor's right, title and interest in and to the Crown Granted Claims known as the "Athelstan-Jackpot Property", located in the Greenwood Mining Division, British Columbia.

The terms of a non-binding Letter of Intent ("LOI") to acquire the Properties were announced on February 24, 2020 (refer to press release "Belmont Signs LOI to Acquire Athelstan-Jackpot Crown Grants In the Greenwood Gold Camp, B.C." posted under the Company's profile on SEDAR.

The Athelstan-Jackpot acquisition is part of the Company's continued focus to acquire and develop strategic gold properties in the prolific Greenwood mining district.

The Athelstan gold property ("Athelstan") comprises 10 contiguous crown granted mineral claims and a private parcel of land covering an area of approximately 120 hectares (ha) The claims are situated about 8 kilometres (km) northwest of the city of Grand Forks, B.C. and 3kms south east of the former Phoenix Mine which produced during the period 1900 - 1976, 27 million tonnes at a grade of 0.9% Cu and 1.12 g/t Au, from a number of different ore bodies (Church, 1986). This amounts to over 1 million ounces of gold and 500 million pounds of copper produced from the Phoenix deposit. 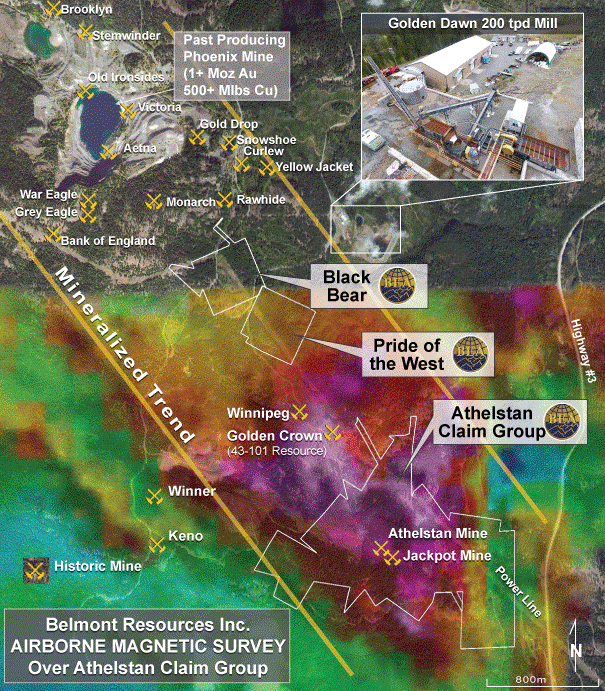 George Sookochoff, CEO/President commented, "The signing of the Agreement is an exciting milestone for the Company and enhances Belmont's strategy of consolidating properties with known historic gold-copper mines in the prolific Greenwood mining district."

About the Athelstan Property

A detailed property scale geological mapping program was completed in 2004 again by Linda Caron, M.Sc., P. Eng. and detailed in an August 2004 Assessment Report authored by the same.

Belmont is currently compiling the extensive amount of both historic and recent exploration data from the Athelstan property into a GIS digital database.

Three distinct styles of mineralization have been observed on the Athelstan property, one of which consists of low sulfidation epithermal quartz veinlets and silicification and it is the potential epithermal gold deposits that Belmont is particularly focused on in the Greenwood District.

Exploration and mining in the Greenwood Camp had primarily focused on copper skarn veins/deposits and less on gold. One reason may have been that the nearby Grand Forks smelter (the second largest in the world at the time) was readily available to process the copper in the region but wasn't necessarily equipped to efficiently extract the gold.

In the past 20 years there have been significant gold discoveries just south of the border in Washington State. This area is known as the Republic mining district which has a rich history in gold production (4 million ounces of gold). Unlike the skarn deposits in Greenwood the gold deposits in Washington were epithermal in nature.

Belmont is utilizing these epithermal prediction models of the Republic Graben in Washington State and combined with the recently assembled comprehensive Greenwood Camp historic exploration database and the new Athelstan GIS database, are delineating favorable areas for epithermal gold deposits and predicting areas of future exploration activity for similar deposits in the Greenwood camp. 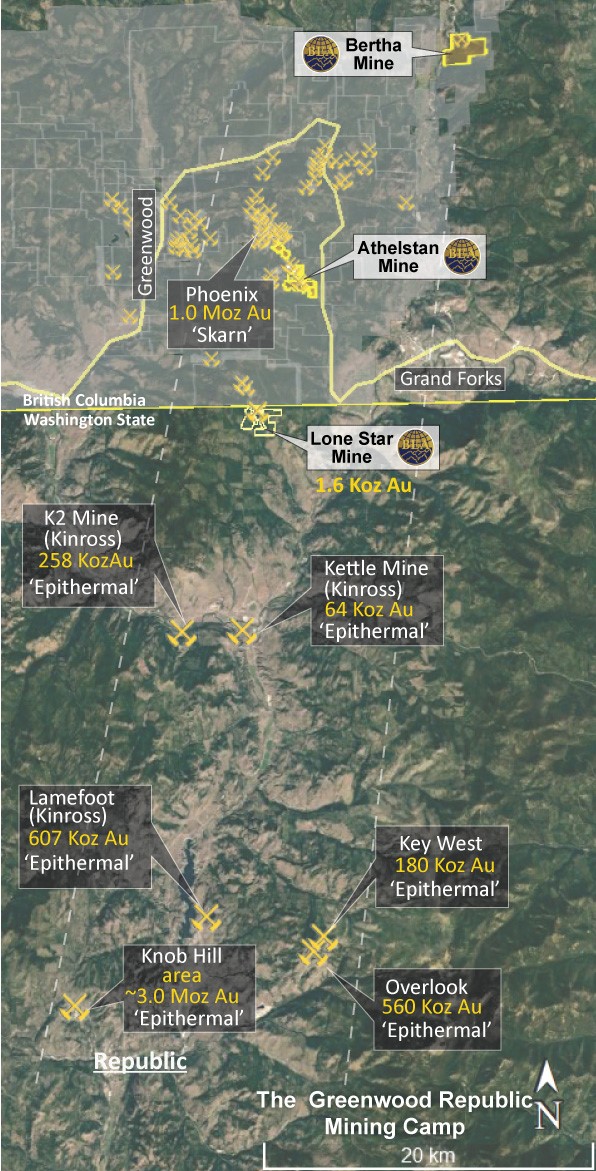 Under the terms of the agreement, Belmont may acquire a 100% interest in the Athelstan-Jackpot Crown Grants by making certain staged cash payments and share payments of common shares in the capital of Belmont to the Vendor.

b. After a period of one year from the signing of the final binding agreement a cash payment in the amount of US$50,000 plus an additional 200,000 common shares of Belmont Resources, subject to 4 months+1 day hold period from issuance date;

c. Belmont will have the option to issue common shares valued at US$25,000 in lieu of the cash payment of $25,000 of the total US$50,000 cash payment (b)
Share price will be determined by a 5 day trading average price preceding the one year option anniversary date.

d. Upon Belmont acquiring 100% right, title and interest to the Property, the Owner will retain a 2.0% NSR (Net Smelter Royalty) in the property;

The scientific and technical information that forms the basis for parts of this press release was reviewed and approved by Laurence Sookochoff, P.Eng., who is a Qualified Person "(QP") as defined by National Instrument 43-101.

Belmont Resources Inc. is a Canadian based resource company traded on the TSX-V under the symbol "BEA". The Company is systematically exploring and acquiring gold properties in Southern British Columbia and Northern Washington State.