"It is very encouraging to see significant amounts of coarse vein-boulders on soil lines where veins were projected between workings. Whereas previously the El Dorado vein zone had been only projected - it is now clearly mappable where soil lines consistently encounter the mineralized vein-boulders", comments Joseph Hebert, Chief Executive Officer. "And our first four holes at depth in La Ivana have all intercepted mineralization similar to that encountered in the phase one shallow drilling."

The initial objective of current drilling in progress is to define the La Ivana discovery to a depth of 300 metres to build a model of bodies of high-grade mineralization within the vein that can be used to advance other targets on the property and also grossly estimate potential in approximately 14 km of projected vein zones on the project.

Four new drill-holes have been completed and the fifth is in progress for a total of 503 metres of drilling. There are significant intervals of quartz-sulfide veins with sulfide-rich halos in the first four holes. Epithermal textures are expressed as colloform, banded quartz and breccias. Massive sulfides are common within vein intervals. Assays are expected over the coming weeks and will be released as they are received. Representative vein intervals are shown in photo 1 and photo 2 below:

After the La Ivana high-grade zone is delineated to depth, drilling will move successively to nine prioritized targets - the first being the El Dorado vein system. Drilling resumed on May 5th, 2020 and will continue into the first quarter of 2021 providing continuous news flow. This program will include approximately 120 planned core holes for a total of 13,000 metres.

The vein system consists of north-northeast trending veins, linked by northwest trending veins. Detailed soil sampling and trenching is expected to reveal the general limits of ore-shoots to guide drilling.

Approximately 2.5 linear kilometers soil lines totaling 239 samples and 27 metres of manual trenches of observed vein zones in saprolite have been completed. Mapping concurrent with soil sampling in the El Dorado has demonstrated that the trace or projection of veins will often be revealed by abundant in-situ or near in-situ vein boulders. In the case of the El Dorado vein boulders can be traced through several seventy-five metre spaced lines. These boulders show sulfide or sulfide oxidation that will be sampled and will also be used to site trenching to map and sample sub-cropping veins. Preliminary trenching in the Megapozo target shows vein and veinlets zones that composite up to 1.5 metres wide. Near in-situ vein boulders are shown in photos three and four below. 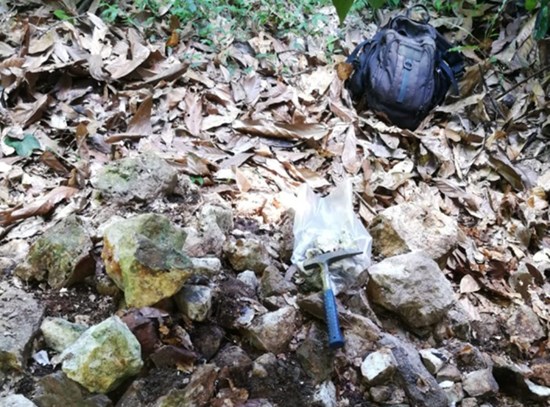 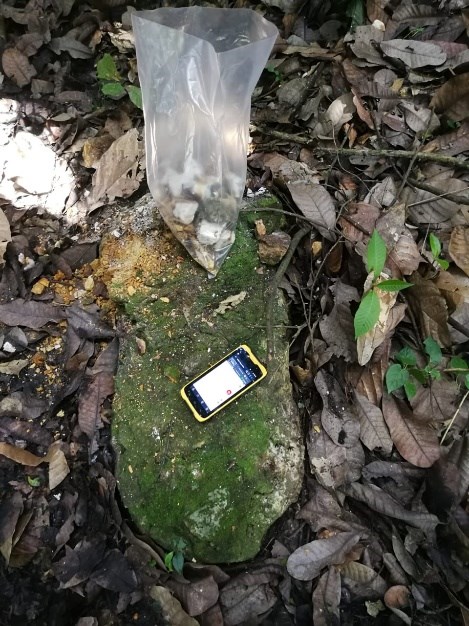 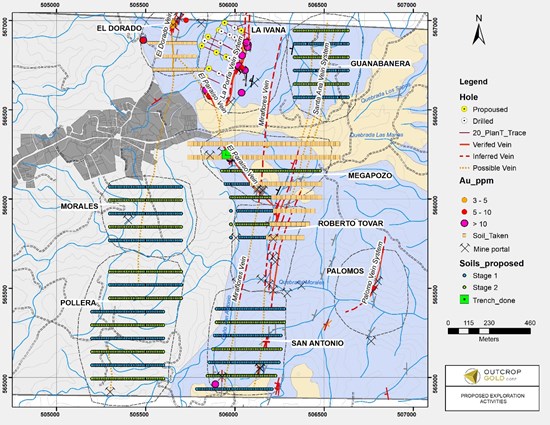 The Santa Ana project comprises 3,538 ha located in the Municipality of Falan, Tolima Department, Colombia, approximately 15 km southeast of the of the town of Mariquita, and 190 km from Bogota, Colombia's capital city. The Santa Ana project covers a significant part of the Mariquita District where mining records date to at least 1585. The Mariquita District is the highest-grade primary silver district in Colombia. Under colonial Spanish era control of the mines, silver grades were reported to be among the highest in Latin America with the fourteen mines of Santa Ana producing average smelter returns of 4,300 g Ag/t from veins averaging 1.4 m wide.

Historic mining depths support a geologic and exploration model for a composite mesothermal and epithermal vein system having mineralization that likely extends to great depth. At Santa Ana it is unlikely that there is sharp elevation restriction common to high-grade zones in many epithermal systems with no mesozonal component.

Outcrop is a gold prospect generator active in Colombia acquiring gold exploration projects with world-class discovery potential. Outcrop performs its own grass roots exploration and then employs a joint venture business model on its projects to maximize investor exposure to discovery and minimize financial risk. Outcrop has seven primary projects in Colombia with three at an advanced stage of exploration. Outcrop will conduct focused drilling on flagship properties such as Santa Ana to create its own catalysts for value creation and to receive full value for future joint ventures or dispositions.

The technical information in this news release has been approved by Joseph P Hebert, a qualified person as defined in NI43-101 and President and Chief Executive Officer to the Company.

To view the source version of this press release, please visit https://www.newsfilecorp.com/release/56226