VANCOUVER, BC / ACCESSWIRE / May 28, 2020 / George Sookochoff, CEO/President of Belmont Resources Inc (TSXV:BEA)(Frankfurt:L3L2) ("Belmont"), (or the "Company") is pleased to announce that it has to acquired a 100% interest in the Come By Chance Mineral Claims known as the "CB Chance Property", located in the Greenwood Mining Division, British Columbia.

The Come By Chance ("CBC") property acquisition is part of the Company's continued focus to acquire and develop strategic gold properties in the prolific Greenwood mining district.

The CBC property is comprised of 21 mineral claims as well as 15 reverted crown granted mineral claims covering an area of approximately 527 hectares (ha). The claims are situated about 8 kilometres (km) northwest of the city of Grand Forks, B.C. and 3kms south east of the former Phoenix Mine which produced during the period 1900 - 1976, 27 million tonnes at a grade of 0.9% Cu and 1.12 g/t Au, from a number of different ore bodies (Church, 1986). This amounts to over 1 million ounces of gold and 500 million pounds of copper produced from the Phoenix deposit. 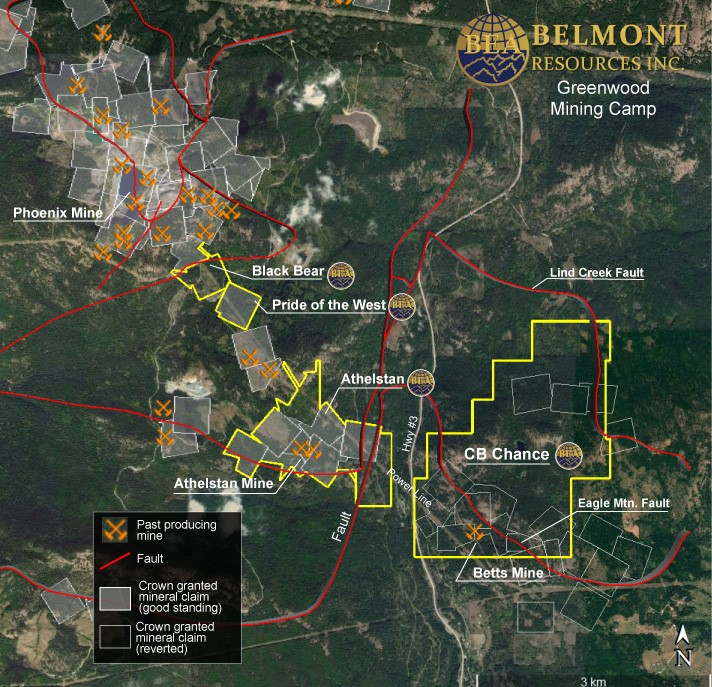 George Sookochoff, CEO/President commented, "The acquisition of the Come By Chance property is another exciting milestone for the Company and further enhances Belmont's strategy of consolidating properties with known historic gold-copper mines in the prolific Greenwood mining district."

About the CB Chance Property

The CBC property has not been systematically explored. Exploration to date has focused largely on copper skarn type mineralization similar to that at the nearby Phoenix deposit.

The majority of the early work was at the Betts showing (Minfile 082ESE261), in the southern part of the CBC property. The Minister of Mines Annual Report for 1904 and 1905 documents some 208 feet of open cuts and shallow shafts at the Betts, as well as a 75 foot long (upper) tunnel with a 40 foot winze and an 825 foot (lower) tunnel. This lower tunnel was driven to cut the mineralized zone 375 feet below surface. A chute of massive pyrrhotite ore was reportedly intersected at a distance of 575 feet in the lower tunnel.

Epithermal style of mineralization is under-explored on the claims and given the regional importance of epithermal gold mineralization and the favourable structural setting, a thorough exploration program to assess the property for this style of mineralization is planned. In particular the area around the CBC 98-1 drill hole situated about 100 meters southeast of the lower Betts adit and close to, and in the footwall of the Eagle Mountain Fault which intersected epithermal quartz veins and quartz flooding with associated sericite alteration, to try to find the surface expression of the epithermal system seen in the drill hole.

A "quartz vein with free gold" is also reported on the former Iron Chief claim (Minister of Mines Annual Report 1900). The Iron Chief straddle the Eagle Mountain Fault to the northwest of the Betts adit.

Graeme Evans of Teck Cominco noted in a 2006 property inspection "numerous showings are present through the Brooklyn sequence and generally consist of Cu-Ag-Au skarns along main faults within several rock types. 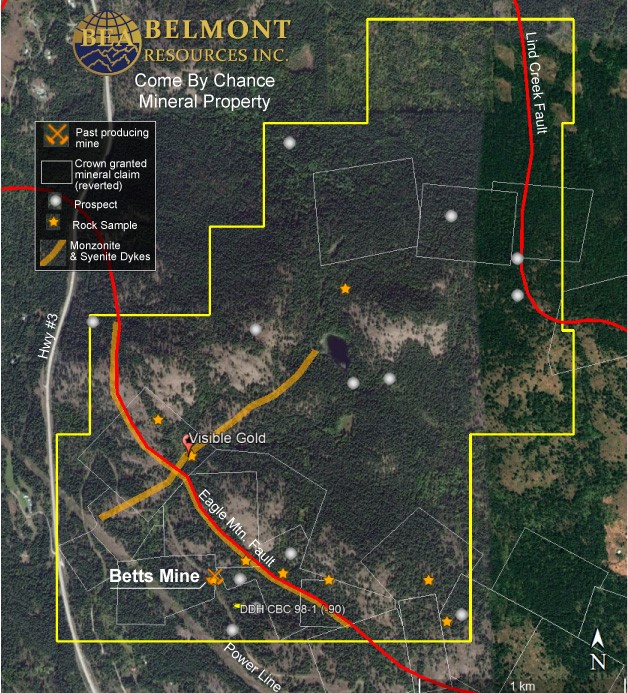 These are isolated occurrences of a large system demonstrated by numerous pits and adits throughout the property particularly along NW trending fault zones. These fault zones display widths up to 100 meters and consist from W to E of the Eagle Mtn. Fault, the Central Hardy Mtn. Fault and the eastern Lind Creek Fault thrust often associated with ultramafic slices reflecting strong fault emplacement. The sequence in the area is dominated by mafic volcanics of the limestones of the Triassac Brooklyn and sharpstone sequence are commonly seen with shallow dips in a possible broad antiform. Mineralization is dominated by variable amounts of pyrrhotite and chalcopyrite in both massive garnet skarn and calcsilicates in mafic volcanics.

There are indications of porphyry potential in the monzonites. An encouraging feature is the presence of well mineralized copper bearing monzonite potentially displaying a porphyry/skarn linkage in SE Betts area.

The claims have been optioned for 100% from a non-related third party (the "Vendor") under the following terms:

(b) the issuance of common shares in the capital of the Company (the "Shares"), as set out below:

The scientific and technical information that forms the basis for parts of this press release was reviewed and approved by Laurence Sookochoff, P.Eng., who is a Qualified Person "(QP") as defined by National Instrument 43-101.

Belmont Resources Inc. is a Canadian based resource company traded on the TSX-V under the symbol "BEA". The Company is systematically exploring and acquiring gold properties in Southern British Columbia and Northern Washington State.