The new campaign, "For Moments Like No Other," highlights the versatile beauty of natural diamonds. 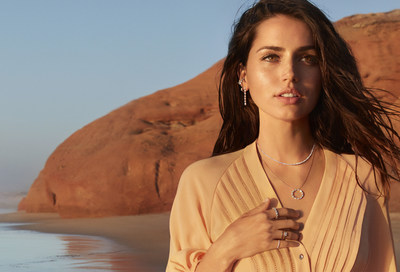 Ana de Armas is a rising Hollywood star. She recently received a Golden Globe nomination for her role in Knives Out, and she'll soon appear in the upcoming James Bond film, No Time to Die. Ana de Armas also shines throughout this new multipart campaign, which was developed to celebrate the myriad connections with which natural diamonds are worn or exchanged, and to bring awareness to the Natural Diamond Council's "Only Natural Diamonds" online platform. The Natural Diamond Council represents seven of the world's leading diamond producers, all of which must follow the group's ethical codes, with an emphasis on mindful and sustainable mining practices and the support of women and families in diamond-mining communities. The "Only Natural Diamonds" portal serves as a window of discovery into this natural diamond universe.

The campaign-which was lensed in coastal Portugal, directed by Manu Cossu and photographed by Camilla Åkrans-will be released on September 20, 2020, during the first ever virtual Emmy Awards. Teasers will be dropped in the weeks leading up to the ceremony, and information about the campaign will appear on the NDC's website from September 16, 2020.

Ana de Armas was approached for the project as she radiates with poise and modernity, and she epitomises an ascendant, free-thinking generation. Her elegant, effervescent and easygoing demeanor reflects the next chapter in the history of natural diamonds; a mindset in which the traditional tenets of diamond-wearing and exchanging are dismantled, leaving an open playing field in their place. From a barefoot party in a fragrant vineyard to a tangerine sunset along the Portuguese coast-diamond baguettes catching and diffusing the glowing rays as the sun slides into the horizon-this new attitude is casual, fun, energetic, present, and, most importantly, driven by connection and experience. Whether heading to a reunion with loved ones after months of isolation, seeing your best friend for a glass of wine after a long day, or taking a twilight walk with a partner, each and every moment is its own-and every moment is like no other.

"I love thinking of diamonds this way, as special emblems of even the small personal moments in our lives," says Ana de Armas. "They represent joy and warmth and beauty."

The campaign's 30-second hero spot airing at the Emmys will be complemented by a series of shorter video segments, spotlighting the various relationships portrayed from the clip. She is seen in laid-back outdoor settings with friends, with a parent, and with a partner. In this, a fresh, opened-up association continues to be emphasised: diamonds are not solely the purview of romantic interests or formal occasions. They are meant for every type of connection.

This new campaign marks a number of firsts for the Natural Diamond Council, in addition to welcoming its first Hollywood headliner. It is the first celebrity-fronted campaign for a diamond group (brand agnostic), adding an important contribution to an industry that supports the livelihoods of roughly 10 million people worldwide. This is also the first campaign dedicated to NDC's "Only Natural Diamonds" platform, and the first marketing initiative by the NDC to showcase such a diverse roster of jewellery designers that work with natural diamonds in exceptionally modern ways.

"Ana is a true talent, and the dynamism she exemplifies is exactly what we seek to do daily in our support of the natural diamond industry," says David Kellie, CEO of Natural Diamond Council. "This campaign redefines traditional diamond moments, celebrating a variety of personal connections with these natural stones. It's a more contemporary approach to the diamond dream, for meaningful moments large or small."

Following its Emmys debut, the campaign will be featured in print media, including Vogue and Vanity Fair's respective November 2020 issues, The New York Times, and at online publications ranging from Bustle to Who What Wear. It will, additionally, be featured on non-linear TV, from Hulu to Amazon Fire. The Natural Diamond Council will also distribute campaign materials through its owned channels, including its website, which will feature behind-the-scenes footage and an interview element with Ana de Armas, as well as comprehensive information about the brands and designers that are seen. The campaign will have a global presence, also running in the United Kingdom, China and India.

The Natural Diamond Council (NDC) advances diamonds' desirability by publishing in-depth and engaging features and trend reports, and sharing resources and information with consumers on the ultimate timelessness and singularity of this remarkable natural stone. The NDC also works to support the integrity of the natural diamond industry, providing transparency, and insight on the ethics, sustainability and progress of this sector.