LONDON, Nov. 8, 2020 /PRNewswire/ -- The stars of the recent Netflix documentary The Speed Cubers competed head to head yesterday in the first purely digital Red Bull Rubik's Cube World Cup, in a spellbinding final that was watched by tens of thousands on Red Bull's Twitch channel. 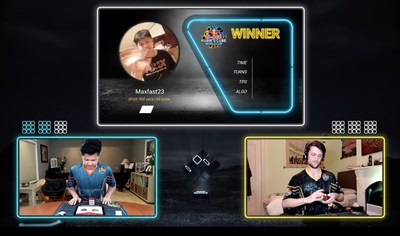 Feliks Zemdegs is the only speedcuber to ever win the World Cube Association World Championship twice, winning in 2013 and 2015.

On winning the top prize and being crowned the world champion, Max Park said, "My motto is 'don't think just solve'. It was amazing that at a time of social distancing the speedcubing community could gather together and compete in such an exciting Red Bull Rubik's Cube World Cup. It was fascinating too, to see that the speeds could be accurately measured to one thousandth of a second. As I'm Feliks Zemdegs' biggest fan and a good friend, it was an honour to share the final with him. I gave the competition my total attention and didn't give myself time to think, because my 100 per cent focus was on the solve."

Christoph Bettin, the CEO for Rubik's Brand said, "The first remote Red Bull Rubik's World Cup produced great drama and suspense with Rubik's ambassadors taking top spot in most of the disciplines. I was thrilled to see Juliette Sébastien from France reach top of the leader board in the women's competition.

"And it was truly amazing to see our 'dream final' of Max Park versus Feliks Zemdegs. Both recently featured in the much-loved Netflix documentary The Speed Cubers and went head to head in the finals of this exciting competition.

"Max Park, our Rubik's Ambassador came out on top and retained his crown for the Red Bull Rubik's Cube World Cup for a second year, although this is the first time it's been purely digital. Congratulations to all the winners, competitors and Red Bull sponsor for an amazing spectacle on the 40th birthday of the Rubik's Cube."

Erno Rubik, who invented the Cube and watched the proceedings online said, "The Rubik's Cube speaks to the noblest, universally shared human characteristics: curiosity, playfulness, problem-solving and intelligence. No matter your social background, colour of your skin or gender, the Cube encapsulates the puzzle of us all. Young people in particular seem to be captivated with solving the Cube at speed, as demonstrated with events such as the Red Bull Rubik's Cube World Cup, which took place this year purely digitally for the first time."

The rescramble event is different from the regular speedcubing events in that competitors are given a solved Cube and need to match the pattern of a randomly scrambled Cube. With 43 quintillion possible scrambles of a Rubik's Cube, this event is regarded as considerably trickier than a traditional solve.

All finalists were able to compete in the World Cup by using the brand new fully digital Rubik's 'Connected' Cube, which tracks players' every rotation and solve times via an app.

The Rubik's Cube is much loved by musicians, magicians and creative artists who enjoy solving the world's most popular puzzle and a special tribute video has been created to mark the 40th anniversary since the Cube became a global phenomenon.

What started out as a puzzle created by Professor Erno Rubik to teach architectural students has evolved into the world's most successful single toy, perceived globally as an art form and also an iconic symbol of intelligence and problem solving.

In 1980, the Rubik's Cube was officially introduced to the world. Now in its 40th anniversary year, nearly half a billion Cubes have been sold to date with 2020 set to be a breakthrough year with over 20 million Rubik's products expected to be sold globally. Adding to the excitement of the anniversary, Rubik's has formed several partnerships to create brand new and unique Rubik's themed products outside of the usual games and puzzles. These include Etch-A-Sketch, The Op, Perplexus, DeKryptic and Marvin's Magic.

Within the USA, You CAN Do the Rubik's Cube program typically places cubes into the hands of half a million students every year, helping them learn critical STEM and STEAM concepts.

The Red Bull Rubik's Cube World Cup is a global competition designed to challenge the most accomplished speedcubers in one of the most exhilarating emerging sports. The World Cup continues to bring additional opportunities to compete with speedcubers from around the world. In the finals, there will be three game modes: Speed Cubing, Fastest Hand (one handed) and Re- Scramble plus events for both men and women. All participants are aged 16 and over.