SHENZHEN, China, Dec. 12, 2020 /PRNewswire/ -- On the afternoon of December 9, Beijing time, the closing ceremony of Russia's guest of honor event for the 18th Conference on International Exchange of Professionals (CIEP) was held in Shenzhen and Moscow at the same time through video connection. Huang Wei, Vice Minister of Science and Technology of China, and Natalia Borisova, Deputy Minister of Science and Education of Russia attended the ceremony and delivered speech. Lu Ming, member of the leading Party Group of the Ministry of Science and Technology of China, presided over the closing ceremony. 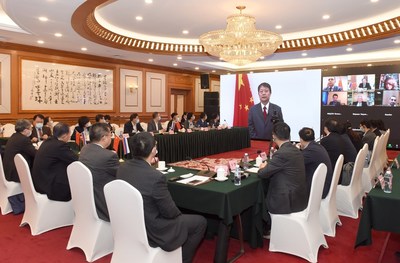 The ceremony was attended by the relevant responsible persons from Foreign Experts Service Department, Talent Introduction Department, Cooperation Department, Exchange Center of the Ministry of Science and Technology, International Cooperation Bureau of SASAC, Shenzhen Science and Technology Innovation Commission, some cooperative units of the CIEP, and representatives of some cooperation units and Russian universities, scientific research institutions and technology enterprises.

Vice Minister Huang Wei said in his speech that COVID-19 epidemic did not hinder the friendship and exchanges between China and Russia. As the first important activity after the launch of the Year of Scientific and Technological Innovation between China and Russia, Russia's guest of honor event of the 18th CIEP were well received by all walks of life and the public of China and Russia through the online platform, and achieved good results. He hoped that Russia would become a long-term partner of the CIEP and work with China to promote practical bilateral international scientific and technological cooperation and exchanges, and jointly upgrade China-Russia comprehensive strategic partnership of coordination in the new era to better benefit the people of the two countries and even the world.

Deputy Minister Borisova said that Russia's guest of honor event for the 18th CIEP is an important event under the framework of the Russian and Chinese Year of Science and Technology Innovation, for which nine important events have been held, including "Russian Guest of Honor Week", high-tech forum, thematic round table conference, bilateral meetings and negotiations. More than 500 famed experts, professional scholars and enterprise leaders from the two countries participated in the event and the number of participants online and offline was over 800,000. During the event, Russia's key universities and scientific research institutions demonstrated nearly 150 cooperation projects, scientific research achievements and personnel training programs, which lay a solid foundation for further cooperation agreements in the future. She said that Russia would continue to consolidate the achievements of scientific and technological cooperation and look for more new opportunities for developing bilateral cooperation.

At the meeting, Xia Bing, Deputy Director of China International Personnel Exchange Center, and Popov Gennady, Vice Chairman and Chairman of the Executive Committee of the International Union of Instrument Manufacturing and Information Communication of Russia delivered summary reports on the Russia's guest of honor event for the 18th CIEP on behalf of China and Russia, respectively. Since its launch in September, nine special events have been held in the form of offline and online video conference in Beijing, Shenzhen, Shanghai, Harbin, Nanjing, Wuhan, Xi'an, focusing on the fields of advanced manufacturing, new materials, biomedicine and health, science and education innovation and cooperation in universities, and the China-Russia Alliance of Natural Products and New Drug Discovery (CRAND) was established, the "Sub Center of Sino Russian Silk Road Industrial Park" was awarded, the initiative of co-building the "Silk Road Science and Education Center" was launched. In the virtual exhibition area of the Russia's guest of honor event set up online, there are 183 scientific and technological innovation and talent exchange projects provided by a total of 76 Russian universities, scientific research institutions and scientific and technological enterprises. The number of participating institutions and projects of Russia reached a historical new high among all countries. This is a breakthrough in promoting the two-way flow of talents between China and Russia, deepening the transformation of achievements, venture capital and other practical cooperation progress.

The closing ceremony was preceded by the last session of Russia's guest of honor event. The International Cooperation Bureau of the State Owned Assets Supervision and Administration Commission of the State Council of China, 16 central enterprises of China and 10 Russian universities and scientific research institutions participated in exchanges on project research and development process, application scenarios, cooperation methods and other contents through offline activity + online video connection.