SEOUL, South Korea, March 3, 2021 /PRNewswire/ -- Yuyu Pharma (KRX: 000220, CEO Robert Wonsang Yu), in anticipation of the 80th anniversary of its establishment on February 28th, 2021, published its history of challenges and changes over the past 80 years. The history is told in storytelling format centered around a series of interviews with the people who have shared this history. 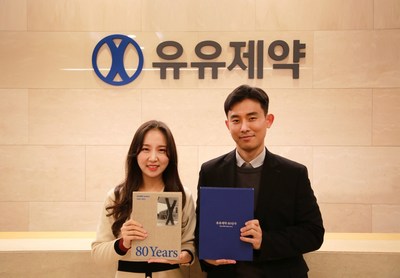 The 80th anniversary history was organized based on visual data giving a glimpse of that time period, such as Yuyu's product advertisements during the 1940's and 50's, product instruction manuals from the 1960's, and interviews with former and current employees.

The history consists of three chapters. Chapter 1 summarizes the major issues Yuyu faced during each 20-year period since its establishment in 1941. Chapter 2 consists of Q&A sessions with Chairman Seungpil Yu and CEO Wonsang Yu; interviews with 9 employees who have worked at Yuyu for at least 20 years such as factory director, union chairman, salespeople, and custodians; and one-sentence descriptions of Yuyu Pharma by new employees.

The 80th anniversary history of Yuyu Pharma consists of 236 total pages. It will also be published in e-book pdf file format and will be available on Yuyu Pharma's website.

Yuyu Pharma (KRX: 000220) is a Korean pharmaceutical company founded in 1941 and listed on the Korean Stock Exchange since 1975. The company manufactures and distributes pharmaceutical products, medical devices, and food supplements. Yuyu Pharma is also committed to developing innovative therapeutics in the area of Ophthalmology, Urology, and Neurology.