VANCOUVER, BC / ACCESSWIRE / June 1, 2021 / BeMetals Corp. (TSXV:BMET)(OTCQB:BMTLF)(Frankfurt:1OI.F) (the "Company" or "BeMetals") is pleased to announce commencement of its 2021 exploration program at the Pangeni Copper Project (Pangeni" or the "Project" or the "Property"), located on the western extension of the Central African Copperbelt in Zambia (the "Zambian Copperbelt"). This year's primary objective is to expand and vector into higher-grade areas of the two priority copper prospects discovered during the 2019 and 2020 exploration programs, and to test other priority targets on the Property.

John Wilton, President and CEO of BeMetals stated, "Given the encouraging results from last year's drilling program, we are very excited to begin accelerated fieldwork with our new partner, Japan, Oil, Gas and Metals National Corporation ("JOGMEC") at the Pangeni Copper Project. We have two very compelling prospects for additional drilling and we look forward to testing a number of new priority targets. The style of copper mineralization we are seeing at both the D and SW prospects are similar to that of known copper mines in the region, and our drilling is planned to determine the scope and grade of the mineralization beneath the shallow sand cover.

With global copper demand forecast to grow appreciably due to this metal's vital role in increasing renewable energy production and utilization, we view exploration at Pangeni to represent a great opportunity with its potential for the discovery of a significant copper deposit.

Highlights of the Planned 2021 Pangeni Aircore and core Drilling Campaign:

Note (1): Intertek Genalysis completed the analytical work with the core samples processed at their preparation facility in Kitwe, Zambia. All analytical procedures were conducted in an Intertek Genalysis laboratory in Australia. Reported widths are drilled core lengths as true widths are unknown at this time. Based upon current data it is estimated true widths range between 80 to 90% of the drilled intersections.

The 2021 exploration program will comprise of an airborne electromagnetic ("AEM") survey to enhance stratigraphic and structural geological mapping under the sand cover and the completion of approximately 4,000 metres of aircore drilling. (See Figure 1 for planned aircore line drilling locations). The positions of the aircore lines are subject to adjustment as interpretation of the AEM is received. Resultant targets will be tested with approximately 1,500 metres of core drilling in some 6 to 8 core holes. The aircore holes will be spaced at various distances along the lines from 400-metre, to 200-metre and 100-metre infill centres based upon field results and geological observations of the drill cuttings. The program will run from late May and initial aircore results will determine targets for core drill testing to be completed before yearend.

At the D Prospect this year, drilling will follow-up on extensions and test for potential higher-grade areas proximal to copper mineralization discovered during the 2019 and 2020 drill seasons where core hole D3-C1 intersected intervals of 3.98 metres at 0.39% copper and 3.70 metres at 0.37% copper. These two shallow copper intersections occur some 850 metres along the same interpreted strike of mineralized zones intersected in holes D2-C1 and D2-C2 during the 2019 field season where D2-C1 intersected 5.50 metres grading 0.53% copper, and D2-C2 intersected 5.56 metres grading 0.47% copper (See Figure 2). Aircore drilling will infill test between holes D3-C1 and D2-C1/D2-C2 to determine the continuity of mineralization between those areas. Two additional aircore lines will step out to the northeast of hole D3-C1 and another line to the southwest of holes D2-C1/D2-C2 to test the extent of mineralization along the interpreted strike (See Figure 2).

At the SW Prospect, a number of significant copper intersections have been returned in the core drilling, including hole E2-C2 which intersected 4.5 metres grading 0.39% copper during the 2019 drilling program. Due to rainy season logistical conditions at the end of 2020, BeMetals decided not to aircore drill at this target last year. Now at the start of the field season, five additional lines of aircore drilling are planned to test for extensions and higher-grade areas of copper mineralization at this prospect.

The core drilled intersections to date indicate that a number of anomalous zones of predominantly copper sulphide mineralization are present at both the D and SW prospects. This mineralization is related to broader zones of anomalous copper, all of which are associated with the same alteration minerals known to occur at various copper deposits and large scale mines within the Zambian Copperbelt. The mineralized zones relate to chalcopyrite and minor amounts of bornite copper sulphides, and are associated with kyanite, an alteration mineral, which has important associations with the mineralization found at other significant copper mines in Zambia. 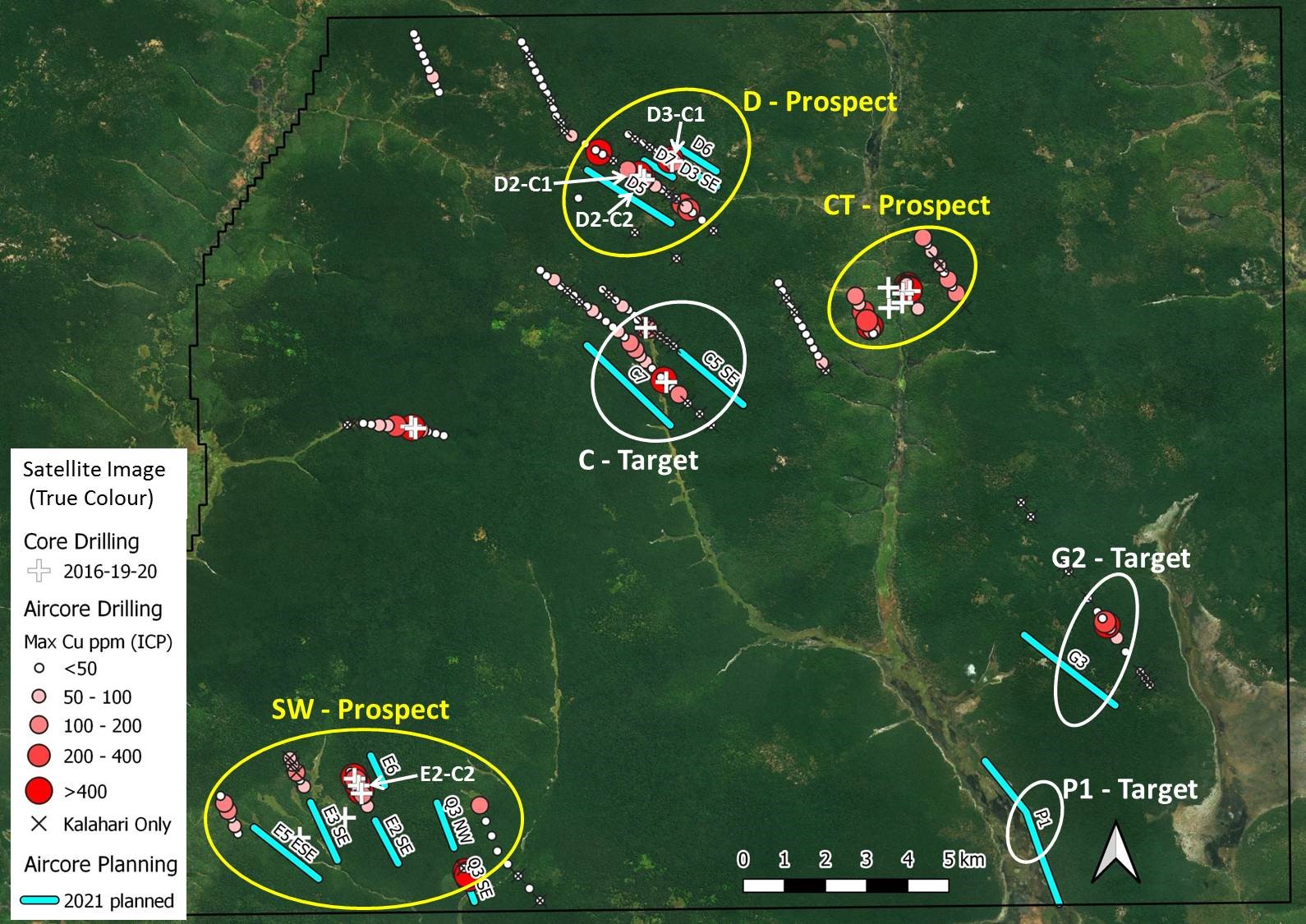 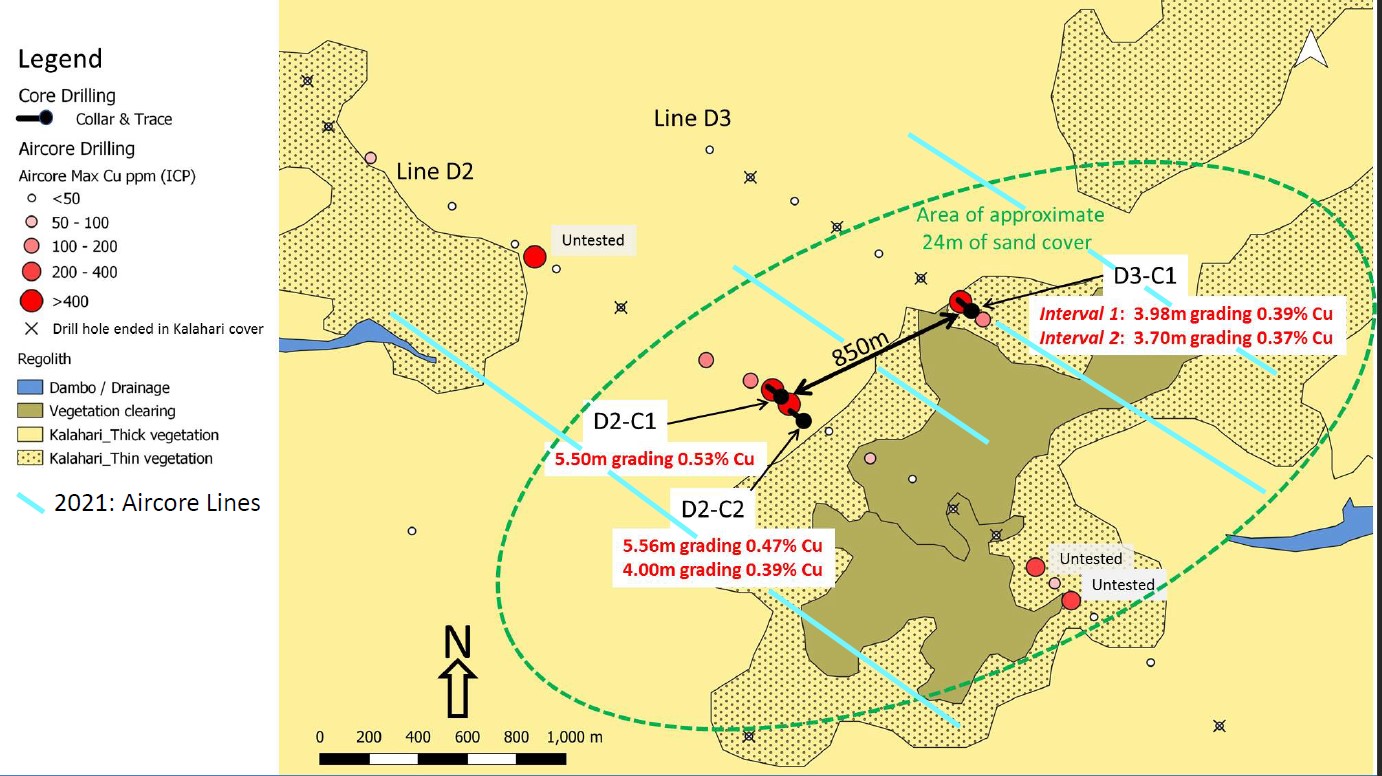 The Pangeni Project is located on the western extension of the Zambian Copperbelt, within the Lufilian Arc, underlain by Katangan Supergroup metasediments situated unconformably on basement schists and gneisses, which are covered by a thin veneer of Kalahari sands. The open pit Sentinel Copper Mine is operated by First Quantum Minerals Ltd. some 130 kilometres to the northeast of the Pangeni Project. A number of major international mining companies have identified this region of the Zambian Copperbelt to be prospective for the discovery of tier one copper mines and are conducting extensive exploration work in this area. 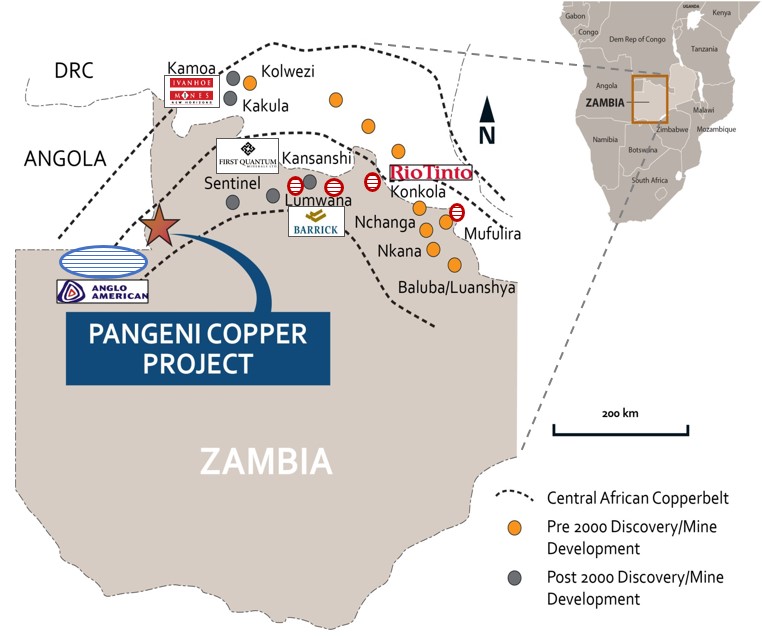 The results reported here for core and aircore drilling were analyzed by Intertek Genalysis, an independent and accredited laboratory. Samples were prepared at their facility in Kitwe, Zambia and analytical work conducted in Australia. The results were determined using multi-acid, near total digest, and analyzed by Inductively Coupled Plasma ("ICP") Optical (Atomic) Emission Spectrometry ("OES"). The core and aircore sampling was conducted with robust sampling protocols that included the appropriate insertion of standard reference material, duplicates, and blanks into the sample stream.

Field operations and management have been provided by Remote Exploration Services ("RES") an independent geological consulting and contracting company. The core and aircore drilling was conducted by Blurock Mining Services, of Kitwe, Zambia.

The Company also announces that an aggregate of 5,775,000 incentive stock options have been granted to directors, officers and consultants of the Company exercisable at a price of $0.425 per share for a term of 10 years, vesting over a two year period and subject to the approval of the TSX Venture Exchange.

BeMetals is a precious and base metals exploration and development company focused on becoming a leading metal producer through the acquisition of quality exploration, development and potentially production stage projects. The Company has recently established itself in the gold sector with the acquisition of certain wholly owned exploration projects in Japan. BeMetals is also progressing both its advanced high-grade, zinc-silver-gold-copper polymetallic underground exploration at the South Mountain Project in Idaho through a preliminary economic assessment, and its tier-one targeted, Pangeni Copper Exploration Project in Zambia. Guiding and leading BeMetals' growth strategy is a strong board and management team, founders and significant shareholders of the Company, who have an extensive proven record of delivering considerable value in the mining sector through the discovery, construction and operation of mines around the world.

The technical information in this news release for BeMetals has been reviewed and approved by John Wilton, CGeol FGS, CEO and President of BeMetals, and a "Qualified Person" as defined under National Instrument 43-101.

ON BEHALF OF BEMETALS CORP.

This news release contains "forward-looking statements" and "forward looking information" (as defined under applicable securities laws), based on management's best estimates, assumptions and current expectations. Such statements include but are not limited to, statements with respect to future exploration, development and advancement of the South Mountain Project, the Pangeni project and the Japan properties, and the acquisition of additional base and/or precious metal projects. Generally, these forward-looking statements can be identified by the use of forward-looking terminology such as "expects", "expected", "budgeted", "forecasts", "anticipates", "plans", "anticipates", "believes", "intends", "estimates", "projects", "aims", "potential", "goal", "objective", "prospective", and similar expressions, or that events or conditions "will", "would", "may", "can", "could" or "should" occur. These statements should not be read as guarantees of future performance or results. Such statements involve known and unknown risks, uncertainties and other factors that may cause actual results, performance or achievements to be materially different from those expressed or implied by such statements, including but not limited to: the actual results of exploration activities, the availability of financing and/or cash flow to fund the current and future plans and expenditures, the ability of the Company to satisfy the conditions of the option agreements for the South Mountain Project and/or the Pangeni Project, and changes in the world commodity markets or equity markets. Although the Company has attempted to identify important factors that could cause actual results to differ materially from those contained in forward-looking statements, there may be other factors that cause results not to be as anticipated, estimated or intended. There can be no assurance that such statements will prove to be accurate, as actual results and future events could differ materially from those anticipated in such statements. The forward-looking statements and forward looking information are made as of the date hereof and are qualified in their entirety by this cautionary statement. The Company disclaims any obligation to revise or update any such factors or to publicly announce the result of any revisions to any forward-looking statements or forward looking information contained herein to reflect future results, events or developments, except as require by law. Accordingly, readers should not place undue reliance on forward-looking statements and information. Please refer to the Company's most recent filings under its profile at www.sedar.com for further information respecting the risks affecting the Company and its business.