BOSTON--(BUSINESS WIRE)--SES AI Corporation (SES), a global leader in the development and production of high-performance lithium-metal (Li-Metal) rechargeable batteries for electric vehicles (EVs) and other applications, announced today that its Class A common stock and warrants will begin trading on the New York Stock Exchange today under the ticker symbols "SES" and "SES.WS", respectively.

Management will participate in an opening bell ceremony at the New York Stock Exchange today in celebration of the public listing, following the completion of a business combination with Ivanhoe Capital Acquisition Corp.

"Today we celebrate an important milestone in a journey that we began a decade ago as a spin-out company of the Massachusetts Institute of Technology," said Qichao Hu, SES Founder and Chief Executive Officer. "Now we're a leading global developer and producer of high-performance Li-Metal batteries with investments from six major global car manufacturers and 'A-sample' joint development agreements with three of them," he said.

"We want to thank the entire SES team for all of their hard work and our partners at Ivanhoe as well as our other investors for their support," added Mr. Hu. "We wouldn't have been able to do this without them," he said. "The capital raised through this transaction along with our new access to the public markets will help us to execute our development and production plans to bring next generation battery technology to global EV manufacturers."

Ivanhoe Capital Acquisition Corp.'s Chairman and Chief Executive Officer Robert Friedland is continuing as a director of the combined company. Mr. Friedland is a renowned mining entrepreneur and technology innovator, who is the Founder and Executive Co-Chairman of Ivanhoe Mines, a leading mining and mineral exploration company focused on strategic "electric" metals and listed on the Toronto Stock Exchange (TSX) under the ticker "IVN". He also is a member of both the American and Canadian Mining Halls of Fame.

"I am delighted to be joining the SES success story," said Mr. Friedland. "We are firmly aligned with many of the world's leading auto manufacturers in our confidence that SES's proprietary Li-Metal batteries will make SES the only next-generation battery technology company to succeed in commercializing its batteries by the middle of this decade. Deep vertical integration between miners producing ethically-sourced "green metals" and major electric auto makers is coming soon and will be of profound, long-term importance to all involved stakeholders."

SES's Li-Metal battery is expected to enable the next generation of high-range and affordable EVs. The Li-Metal approach provides the superior energy density of Li-Metal via the proven manufacturing efficiencies of lithium-ion batteries. SES's Li-Metal batteries use a high-energy-density Li-Metal anode, a protective anode coating, a proprietary high-concentration solvent-in-salt liquid electrolyte, and artificial intelligence ("AI") safety features that allow for greater performance and manufacturing efficiencies than today's all-solid-state Li-Metal batteries.

SES is a global leader in development and production of high-performance Li-Metal rechargeable batteries for electric vehicles (EVs) and other applications. Founded in 2012, SES is an integrated Li-Metal battery manufacturer with strong capabilities in material, cell, module, AI-powered safety algorithms and recycling. Formerly known as SolidEnergy Systems, SES is headquartered in Boston and has operations in Singapore, Shanghai, and Seoul. To learn more about SES, please visit: investors.ses.ai.

This press release may contain certain "forward-looking statements" within the meaning of the Private Securities Litigation Reform Act of 1995, Section 27A of the Securities Act of 1933, as amended, and Section 21E of the Securities and Exchange Act of 1934, as amended, including statements regarding SES's or its management teams' expectations, hopes, beliefs, intentions or strategies regarding the future. The words "believe," "may," "will," "estimate," "continue," "anticipate," "intend," "expect," "should," "would," "could," "plan," "project," "forecast," "predict," "possible," "potential," "seem," "seek," "future," "outlook," "target" and other similar expressions that predict or indicate future events or trends that are not statements of historical matters may identify forward-looking statements, but the absence of these words does not mean that a statement is not forward-looking. These forward-looking statements are based on SES's current expectations and beliefs concerning future developments and involve a number of risks, uncertainties (some of which are beyond SES's control) or other assumptions. Many factors could cause actual future events to differ materially from the forward-looking statements in this press release, including but not limited to: changes in domestic and foreign business, market, financial, political and legal conditions; the failure to realize the anticipated benefits of the business combination; risks relating to the uncertainty of the projected financial information with respect to SES; risks related to the development and commercialization of SES's battery technology and the timing and achievement of expected business milestones; the effects of competition on SES's business; the risk that the business combination disrupts current plans and operations of SES as a result of the consummation of the business combination; the ability to recognize the anticipated benefits of the business combination, which may be affected by, among other things, competition, the ability of the combined company to grow and manage growth profitably, maintain relationships with customers and retain its management and key employees; risks relating SES's history of no revenues and net losses; the risk that SES's joint development agreements and other strategic alliances could be unsuccessful; risks relating to delays in the design, manufacture, regulatory approval and launch of SES's battery cells; the risk that SES may not establish supply relationships for necessary components or pay components that are more expensive than anticipated; risks relating to competition and rapid change in the electric vehicle battery market; safety risks posed by certain components of SES's batteries; risks relating to machinery used in the production of SES's batteries; risks relating to the willingness of commercial vehicle and specialty vehicle operators and consumers to adopt electric vehicles; risks relating to SES's intellectual property portfolio; the ability of the combined company to issue equity or equity-linked securities or obtain debt financing in the future and those factors discussed under the heading "Risk Factors," in the definitive proxy statement/prospectus relating to the business combination, and other documents of SES filed, or to be filed, with the SEC. There may be additional risks that SES does not presently know or that SES currently believes are immaterial that could also cause actual results to differ from those contained in the forward-looking statements. In addition, forward-looking statements reflect SES's expectations, plans or forecasts of future events and views only as of the date of this press release. SES anticipates that subsequent events and developments will cause its assessments to change. However, while SES may elect to update these forward-looking statements at some point in the future, SES specifically disclaims any obligation to do so. These forward-looking statements should not be relied upon as representing SES's assessments as of any date subsequent to the date of this press release. Accordingly, undue reliance should not be placed upon the forward-looking statements. 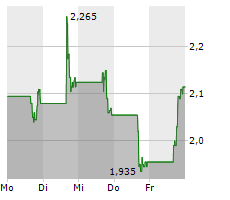