VANCOUVER, BC / ACCESSWIRE / May 2, 2022 / Torq Resources Inc. (TSX-V:TORQ)(OTCQX:TRBMF) ("Torq" or the "Company") is pleased to announce the discovery of a new copper and gold sulphide system as a result of its maiden 4,075 metre (m) reverse - circulation (RC) drill program at its Margarita Iron-Oxide-Copper-Gold (IOCG) project, located in northern Chile about 65 kilometres (km) north of the city of Copiapo. Drill hole 22MAR-013R intersected 90 m of 0.94% copper and 0.84 g/t gold at a depth of 50 m - 140 m. This discovery successfully identified the copper and gold sulphide source mineralization to the abundant copper oxide mineralization observed on the southern margin of the project, validating the Company's exploration thesis, and represents the potential for a significant new IOCG discovery in the Cretaceous Coastal Cordillera belt in northern Chile (Figure 1). A summary of the drill results is presented in Table 1.

"This copper and gold discovery drill hole is a remarkable success for Torq. After only acquiring the Margarita project a year ago, our team was able to uncover the potential for an entirely new IOCG deposit in Chile from its maiden 13-hole drill program on a project that had never been drilled before. We are incredibly impressed by the work of our technical team and their ability to move quickly and methodically in recognizing the opportunity at Margarita at an early stage and then delivering the kind of results all exploration companies strive for. We are now diligently preparing for a follow-up drill program and will update shareholders and stakeholders of our plans in the very near future."

"In the first ever modern drill program at the Margarita project, the Company has demonstrated the true potential of the property with a meaningful discovery. The mineralization has a clear signature over a 1 km strike length, and we believe there is significant potential for the project to host a substantial mineralized body. We greatly look forward to the second phase of drilling this summer when we will aim to outline a world-class IOCG deposit."

A Message from Waldo Cuadra, General Manager of Chile:

"Rarely does an exploration team on its first drill program achieve noteworthy success with the discovery of a significant mineralized section. The Margarita project has the potential to be Chile's next major IOCG discovery, and after a long process of monitoring this project over the years, it is very gratifying to drill Margarita successfully with a team of experienced and motivated geologists as well as the full support of our executive team in Vancouver. I am proud to lead our team of geologists in Chile toward our objective of defining an IOCG - type deposit."

The discovery of significant iron-oxide-copper-gold mineralization was made through a combination of geological, geochemical and geophysical vectors. The mineralization is situated along the north-northwest trending Falla 13 strike-slip reverse structure, which has been mapped on the property over a strike length of at least 2 km with associated strong hematite-argillic-sericitic alteration (Figure 2-3). Soil geochemistry conducted using portable X-Ray fluorescence (pXRF) shows a 900 m copper anomaly situated along the Falla 13 structure, which is coincident with the mineralization in drill hole 22MAR-013R (Figure 4). Importantly, this copper-in-soils anomaly is terminated to the south by volcanic cover associated with the Remolino rhyolite dome. The Company's technical team believes this mineralized signature has the potential to extend beneath this cover sequence of volcanic rocks. In addition, there is a strong correlation between the mineralized intercept and strong magnetic and conductivity highs from ground-based geophysical surveys, which are associated with magnetite, copper sulphide mineralization and strong hydrothermal alteration along the Falla 13 structure, respectively (Figures 5-6). Collectively, the geological, geochemical and geophysical signatures encountered in drill hole 22MAR-013R extend along strike for approximately 1 km, demonstrating the potential to expand on the initial discovery.

Drill hole 22MAR-013R is hosted within a wide structural corridor, which is interpreted to exist at a depth between 20 m - 250 m, and which exhibits a typical IOCG zonation where the higher grade mineralization is associated with shallow silica-hematite-pyrite-chalcopyrite mineral assemblage that grades vertically downward into a magnetite-hematite-chalcopyrite-pyrite mineral assemblage at a depth of 50 m - 140 m. The higher grade mineralization is interpreted to be associated with breccia bodies and associated veining hosted within a diorite and quartz diorite intrusive complex. The upper portion of the mineralized intercept, from 40 m - 106 m, is characterized as a zone of mixed secondary iron and copper oxide minerals and a sulphide mineral assemblage of chalcopyrite and pyrite that grades into sulphide-only mineralization at a depth of 106 m - 140 m (Figure 7). From 140 m - 192 m, mineralization is characterized by abundant pyrite mineralization (5%-20%) with low copper values averaging 48 parts per million (ppm). From 192 m - 250 m, the mineralization is characterized by primary 5%-10% pyrite mineralization, with an average of 768 ppm copper that is associated with silica-magnetite-hematite alteration. The hole ended with 250 m - 360 m of silica-chlorite and calc-sodic alteration showing intervals with over 20% of disseminated pyrite. The Company is currently planning a follow-up drill program to continue to explore the Falla 13 structural corridor over an approximate strike length of 1 km.

The Company has increased its land position at the Margarita project, acquiring an additional 200 hectares on the northern margin of the property, in order to expand the exploration potential as well as to create a larger buffer around the discovery drill hole, 22MAR-013R (Figure 8). 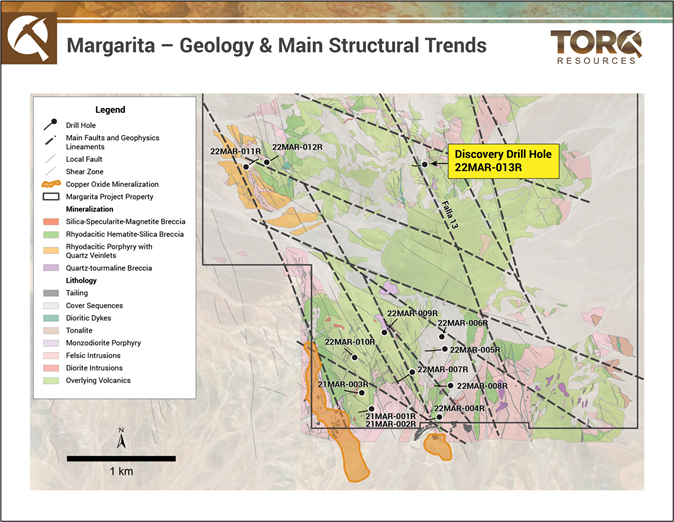 Figure 1: Illustrates the position of the discovery hole in the north - central region of the project along the Falla 13 structural corridor. 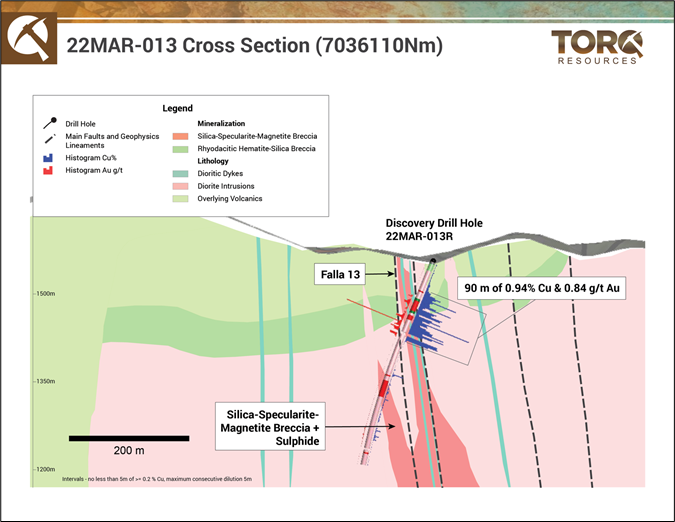 Figure 2: Illustrates a cross section of the structurally controlled mineralization associated with silica-hematite-magnetite bodies, as highlighted by the red colour, encountered in drill hole 22MAR-013R. 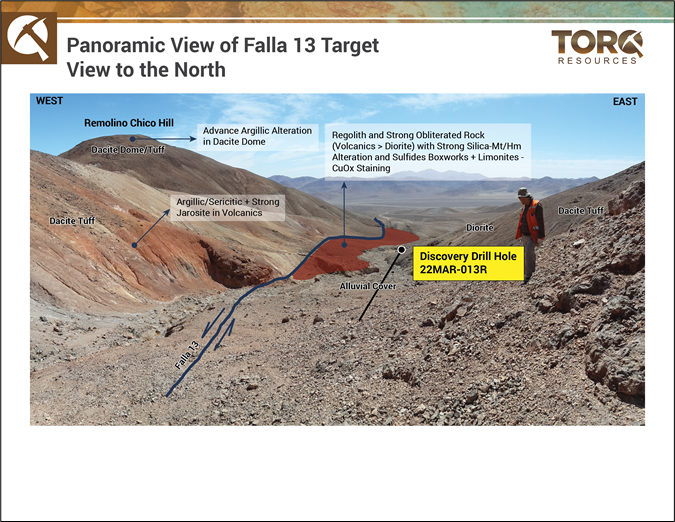 Figure 3: Illustrates a view to the north of the Falla 13 structural corridor. The surface expression of mineralization encountered in drill hole 22MAR-013R is represented by strong silica-hematite alteration with sulphide boxwork, limonite and copper-oxide staining along fractures. 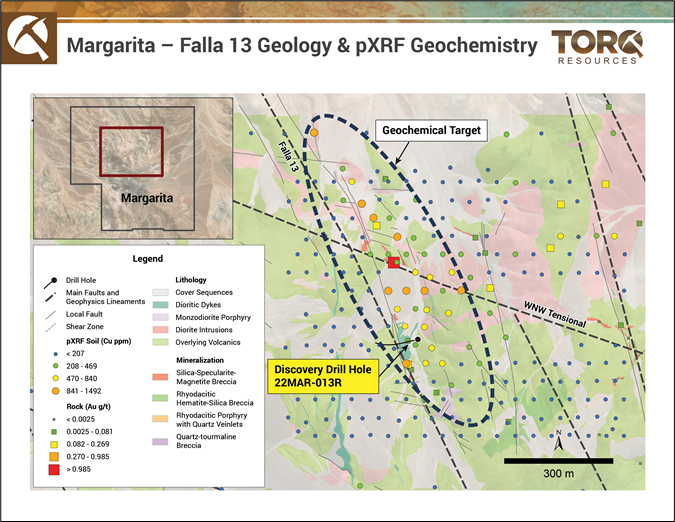 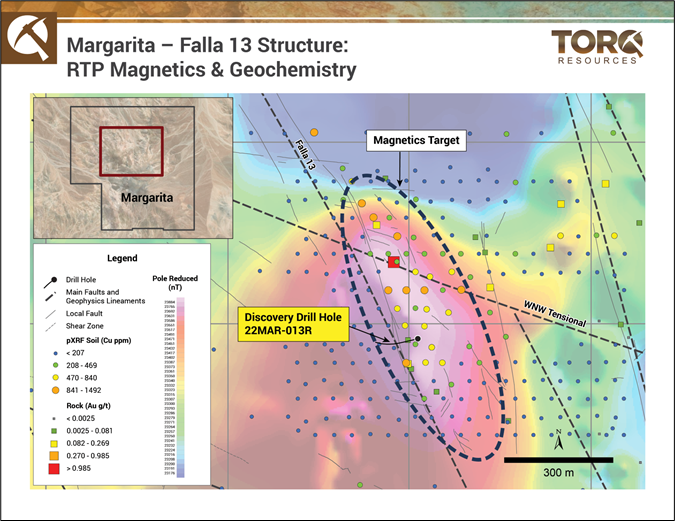 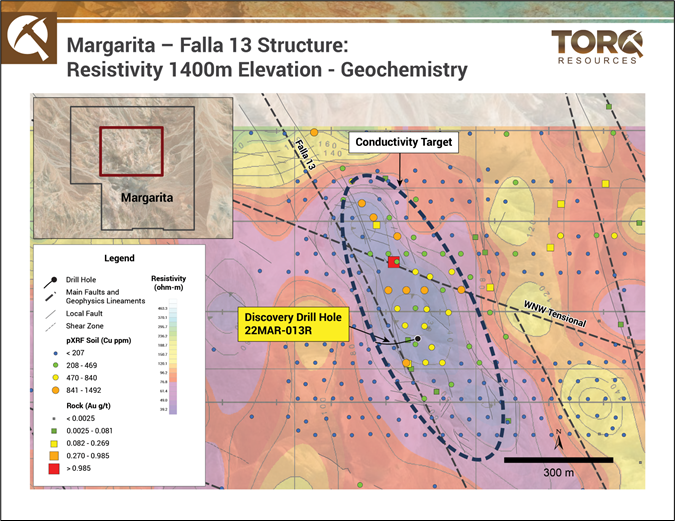 Figure 6: Illustrates the conductivity high associated with the mineralization encountered in drill hole 22MAR-013R, which is interpreted to be associated with intense potassic and sodic alteration along the Falla 13 structural corridor. 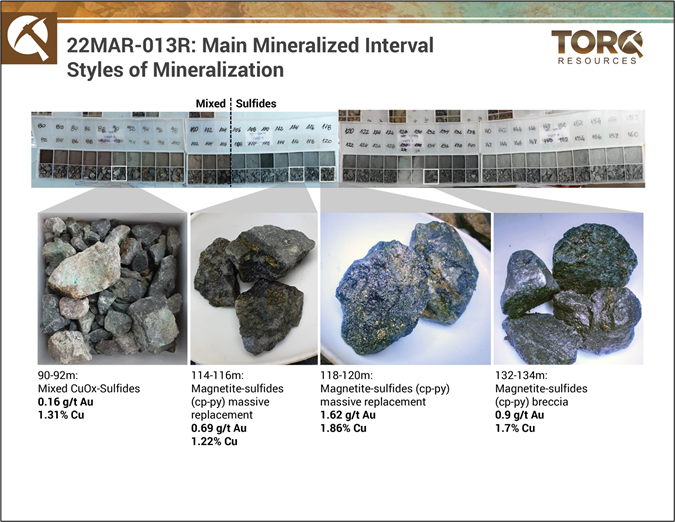 Figure 7: Illustrates the mixed oxide/sulphide and sulphide-only styles of mineralization observed within the RC chips that display abundant chalcopyrite and pyrite. 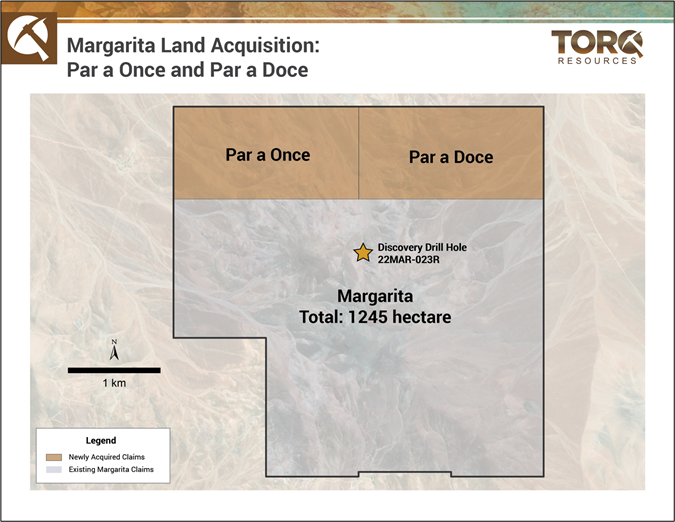 Figure 8: Illustrates the newly acquired land position on the northern margin of the project where 200 additional hectares were added to the project with the acquisition of the Par a Once and Par a Doce claims.

Michael Henrichsen P.Geo, Torq's Chief Geological Officer, is the qualified person as defined by NI 43-101 (Standards of Mineral Disclosure) who assumes responsibility for the technical contents of this press release.

ON BEHALF OF THE BOARD,

Torq is a Vancouver-based copper and gold exploration company with a portfolio of premium holdings in Chile. The Company is establishing itself as a leader of new exploration in prominent mining belts, guided by responsible, respectful and sustainable practices. The Company was built by a management team with prior success in monetizing exploration assets and its specialized technical team is recognized for their extensive experience working with major mining companies, supported by robust safety standards and technical proficiency. The technical team includes Chile-based geologists with invaluable local expertise and a noteworthy track record for major discovery in the country. Torq is committed to operating at the highest standards of applicable environmental, social and governance practices in the pursuit of a landmark discovery. For more information, visit www.torqresources.com.

True widths of mineralization are unknown based on current geometric understanding of the mineralized intervals.

Canadian mineral terminology and standards differ from those of other countries. The Company's public disclosure filings highlight some of these differences.