JOHANNESBURG, May 13, 2022 /PRNewswire/ -- Pastor Alph Lukau has donated food parcels worth millions of rands in an emergency humanitarian effort to assist the thousands of vulnerable families who were left homeless by the recent floods in the South African province of KwaZulu-Natal, as per AL Foundation. 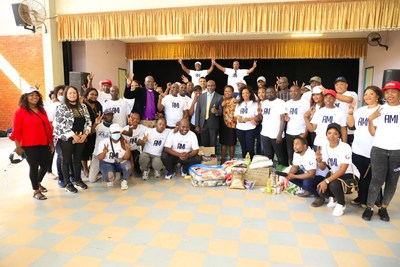 In early April 2022, a weather system triggered floods in South Africa in the KwaZulu-Natal (KZN) province. The devastating floods, among the worst to hit the province, left more than 400 people dead. A National State of Disaster has been declared in response to the floods and landslides, and several rescue teams have been deployed.

Pastor Alph Lukau along with the support of AL Foundation and AMI responded to the needs of thousands of families displaced by the catastrophic floods by mobilising three loaded trucks packed to the brim with food parcels, which were made up of bags of rice, mealie-meal, beans, fish and vegetables among other items and were handed over to the victims by the church management to eThekwini executive mayor, Mxolisi Kaunda last week in presence of the chair of Gauteng legislature and former MEC for security and safety, Sizakele Malobane, who applauded the church and Pastor Alph Lukau.

Pastor Alph Lukau said his church was touched by the plight of the victims after watching videos posted on social media. "The family stands together and the community lives with one another. What hurts one, hurts the other. In the recent past, we have all been saddened by the happenings in KwaZulu-Natal. The floods have taken lives, destroyed homes and property," said Lukau.

Relief assistance is an expression of Alleluia Ministries International (AMI) standing in solidarity with people in need all around the world and joined hands with AL Foundation along with those who have extended a helping hand, "With the little token, we are saying to them, we are with you and we stand with you." said the teary-eyed Pastor.

AL Foundation is a South African Christian charity founded in 2011, motivated by compassion and social well-being, working in the public interest and common good through raising of funds & formation of partnerships and solicitation of sponsorships.