Happy Elements: PRE-REGISTRATION FOR THE ENGLISH RELEASE OF ENSEMBLE STARS!! MUSIC IS AVAILABLE ON GOOGLE PLAY AND APP STORE NOW

BEIJING, May 13, 2022 /PRNewswire/ -- Ensemble Stars!! Music, one of the most popular music-themed idol training mobile games worldwide, produced by Happy Elements, announced that the pre-registration for its English version is now also available on Google Play Store and App Store starting from May 13, 2022. Players from the United States, Canada, the United Kingdom, and Australia can now complete the pre-registration with mobile devices through the Google Play Store or App Store to claim a wide range of exclusive rewards. At the same time, a special invitation event is being held on the official website of Ensemble Stars!! Music for fans to obtain a load of further goodies to boot by inviting new players who haven't pre-registered before. 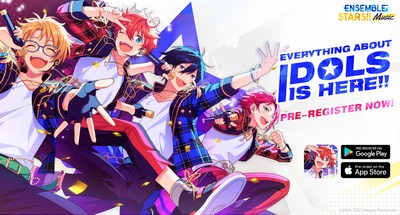 It is worth mentioning that Ensemble Stars!! Music has been honored with a series of highly acclaimed awards, including "User's Choice Game of 2021", the "Best Pick Up & Play" on Google Play, and the "Best Music Game Worldwide" from Sensor Tower APAC Awards 2021. It also ranked 3rd on the list of "Most Tweeted About Games Globally" in 2022 Q1.

To unlock the exclusive rewards, players just need to complete the pre-registration on the official website of Ensemble Stars!! Music. Attractive bonuses including an Exclusive Title, 200 Diamonds, 2 DIA Scout Ticket, 1 Gem(L) and 1 Gem (M) each in three colors will be issued to those who pre-register successfully upon the day of the game's official release. Players who pre-register through the Google Play Store or App Store will even be rewarded with additional 200 Diamonds.

Fans of Ensemble Stars!! Music are also encouraged to participate in the special invitation event held on the official website of this highly popular game. By successfully inviting five players who have never pre-registered before to complete the pre-registration, the inviter can obtain up to 6 DIA Scout Tickets. At the same time, each reward can only be claimed once. Don't miss the joy of producing your extraordinary idol with your friends together by exploring more details on the official website of Ensemble Stars!! Music.