PepsiCo: LAYS AND GATORADE CHANGE THE GAME AHEAD OF UEFA WOMEN'S CHAMPIONS LEAGUE FINAL IN TURIN

TURIN, Italy, May 20, 2022 /PRNewswire/ -- Two of the world's most iconic brands, Lay's and Gatorade, have come together to launch a series of grassroots initiatives, as part of PepsiCo's ongoing commitment to provide equal opportunities for men and women on the pitch, and to celebrate its sponsorship of the UEFA Women's Champions League. Lay's RePlay, a global initiative created in partnership with the UEFA Foundation for Children and streetfootballworld that aims to bring joy to deserving communities by creating football pitches partially made of reused chip bags, was launched today in Turin, Italy. UEFA legend, Claudio Marchisio, and UEFA Chief of Women's Football, Nadine Kessler, unveiled the pioneering new sustainable pitch that was inaugurated for the local community to enjoy, creating a safe space to host long term educational football programs.

Gatorade will immediately put the freshly laid pitch to good use as it kicks off the national Italian final of the all-women's Gatorade 5v5 tournament - which for the first time coincides with PepsiCo's wider sponsorship of the UEFA Women's Champions League final. Both the Lay's RePlay pitch program and the eagerly awaited return of the 5v5 tournament cement the brands' commitment to supporting young athletes and driving positive change in local communities through the power of sport.

Lay's RePlay, a zero net carbon footprint initiative, has seen three football pitches opened in South Africa, Brazil and the UK in 2021, with Italy marking the first RePlay pitch to land in 2022. The opened pitches are already driving a positive change within the communities, with 810 participants directly impacted through 1,427 hours of Lay's RePlay educational football programming across the 3 pitches. A further 19,000 wider community members have been indirectly impacted through general use of the pitch, special community events, or families of the participants.

The new Lay's RePlay pitch in Turin, aimed at the community of the Aurora district, will provide 18 hours of weekly football educational sessions to be rolled out over the next 12 months, at over 200 young people and women at the risk of social exclusion. The programs, which focus on educational empowerment and personal growth, are designed and measured against four key areas: creating a sense of belonging, increasing engagement, promoting safety, and ensuring access to sport.

The pitch has been built using the most sustainable technology. It gives empty chip bags a second life, making up 32% of the pitch, as well as the turf and shockpad layer being 100% recyclable. From selecting the materials to the installation, itself, Lay's RePlay pitches are designed to minimize the impact on the environment, biodiversity and community in each country.

Gatorade continues to fuel future football legends and provide equal opportunities for both male and female players, offering them the chance to represent their country, showcase their passion and perform on a global stage with the return of the annual five-a-side 5v5 Football Tournament. Now in its fifth year, 5v5 has given over 100,000 young people the chance to excel in the sport, having grown from modest beginnings to now include teams from over 17 countries.

After local rounds held in eight Italian cities, the winners will compete at a national level in Turin. The female 14-16 year-old winners, along with local communities will have the once in a lifetime opportunity to carry the UEFA Women's Champions League banner to the center of the pitch as a Centre Circle Carrier during the opening ceremony for the UEFA Women's Champions League Final.

As part of Gatorade's aim to inspire and educate athletes of all levels, all players will receive support from Gatorade Sports Science Institute (GSSI) scientist Dr Rebecca Randell, who will offer advice on hydration and sports nutrition. Gatorade will also provide them with Gx Sweat Patch, a unique Gatorade technology that will deliver optimal hydration tailored to each individual player and make changes that can help increase their performance. Before the match, UEFA Legend Claudio Marchisio will be on the ground to support the 5v5 women's teams, offering advice and a motivational talk before kick-off. During the 5v5 event, Gatorade will keep players hydrated through supplying them with Gatorade in 100% recycled plastics bottles2, and Gatorade powders, delivering a more sustainable tournament.

One of PepsiCo's main ambitions is to deliver positive outcomes for the planet and people through its PepsiCo Positive (pep+) sustainability strategy, leading to the development of more sustainable, regenerative, and inclusive systems. PepsiCo's global brands play an important role in helping PepsiCo reach its goals and the UEFA Women's Champions League has given them the platform to bring this vision to life.

From the Lay's RePlay pitches opening around the world to Gatorade minimizing the use virgin of plastic to hydrating the finalists, PepsiCo is putting initiatives in place that can deliver on these ambitions.

UEFA legend and former Italian professional footballer Claudio Marchisio, commented: "It's an honor to be supporting the launch of the Lay's Replay pitch ahead of the UEFA Women's Champions League. I've been fortunate enough to play at some incredible facilities throughout my career so I can speak to the benefits that the Lay's RePlay pitch will have for the youth of Turin, and the generations that follow. This pitch will have a positive impact uniting them through the power of football, helping them learn, grow, develop confidence and teamwork, and have fun."

Mark Kirkham, SVP and Chief Marketing Officer, Global Beverages at PepsiCo, commented: "Our partnership with the UEFA Women's Champions League provides an incredible opportunity to bring the best of our Pep+ vision to life. From Lay's replay sustainable football pitches to the first female Gatorade 5v5 program, we are committed to supporting young athletes and local communities through the power of sports while delivering positive outcomes for the planet and people by leading the development of more sustainable and inclusive systems."

Sebnem Erim, VP of Marketing, Global Foods at PepsiCo, said: "At PepsiCo, we're committed to the future of women's football, bringing our influence and scale to bring due recognition to Women's football. And today we are proud to inaugurate our first Lay's RePlay pitch for 2022 in Turin and host the national finals of 5v5 on it. We want to play an active role in supporting Women's football, working hard to make sure we activate this platform with the conviction, energy and quality that many of the players have demonstrated."

PepsiCo products are enjoyed by consumers more than one billion times a day in more than 200 countries and territories around the world. PepsiCo generated more than $79 billion in net revenue in 2021, driven by a complementary beverage and convenient foods portfolio that includes Lay's, Doritos, Cheetos, Gatorade, Pepsi-Cola, Mountain Dew, Quaker, and SodaStream. PepsiCo's product portfolio includes a wide range of enjoyable foods and beverages, including many iconic brands that generate more than $1 billion each in estimated annual retail sales.

Guiding PepsiCo is our vision to Be the Global Leader in Beverages and Convenient Foods by Winning with PepsiCo Positive (pep+). pep+ is our strategic end-to-end transformation that puts sustainability at the center of how we will create value and growth by operating within planetary boundaries and inspiring positive change for planet and people. For more information, visit www.pepsico.com.

The Gatorade Company, a division of PepsiCo, provides sports performance innovations designed to meet the needs of athletes at all competitive levels and across a broad range of sports. Backed by more than a 50-year history of studying the best athletes in the world and grounded in years of hydration and sports nutrition research at the Gatorade Sports Science Institute, Gatorade provides scientifically formulated products to meet the sports fuelling needs of athletes in all phases of athletic activity. For more information and a full list of products, please visit www.gatorade.com.

Established in 2015, the UEFA Foundation for Children is a charitable organization governed by Swiss law. It defends the rights of underprivileged children by using the power of football to improve their lives and to help them develop their potential and find their place in the community. The foundation currently invests in 168 projects and so far to 318 projects in 116 countries worldwide. More than 1,180,000 children have already benefited from the foundation's work since its creation. For more information, visit www.uefafoundation.org.

streetfootballworld is a non-profit organisation representing the world's largest community of organisations implementing programmes in the field of football and sport for good, with nearly two decades building and implementing social impact strategies through sports and particularly football in cooperation with a wide range of partners - from the football industry, sponsors, governments, and private partners. The streetfootballworld network is an initiative created by the organisation to connect and empower community organisations using football in specific, and sport in general, as a tool to drive social impact. 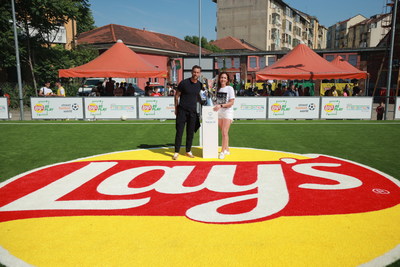 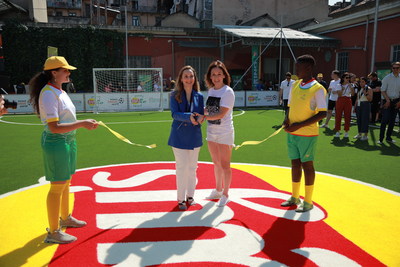