Earlier this week, MGM offered to buy Entain Plc, previously known as GVC Holdings Plc, for 0.6 MGM shares for each Entain share, which represents a value of 1,383 pence per Entain share.

But Entain then said that the proposal significantly undervalued the company.

IAC has to date invested about $1 billion in MGM with an initial investment thesis of accelerating MGM's penetration of the $450 billion global gaming market.

IAC noted in its letter of intent that IAC continues to strongly support the objective for MGM whether or not a transaction with Entain is consummated.

MGM has also indicated that a partial cash alternative could also be made available to Entain shareholders.

IAC has indicated in its letter of intent that it would be willing to consider funding a portion of the partial cash alternative through a further investment in MGM due to IAC's confidence in MGM and its prospects.

IAC also indicated in its non-binding letter of intent that it is IAC's current intention that IAC's additional investment into MGM for those purposes could be up to $1 billion. The terms and amount of such investment would require the mutual agreement of IAC and MGM.

As per the U.K. rule, MGM must by not later than 5.00 p.m. on 1 February 2021 either announce a firm intention to make an offer for Entain or announce that it does not intend to make an offer. The deadline will only be extended with the consent of the panel.

On Thursday, Entain announced a recommended cash offer to buy Enlabs for 40 Swedish kronor per share. The offer values Enlabs at around 2.80 billion kronor or about 250 million pounds. 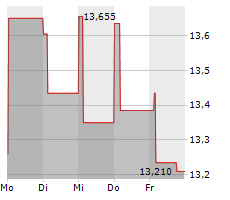