The prior year's normalized net income was 296.2 million euros or 2.20 euros per share.

The company said it significantly outperformed market growth, which is estimated at 1 percent for 2020. At the same time, Symrise stayed behind its defined sales target, as the business development in the month of December was impacted by a criminal cyber-attack.

Further, the Executive Board and the Supervisory Board propose a dividend increase to 0.97 euro, from last year's 0.95 euro, for the fiscal year 2020 to the annual general meeting.

Looking ahead for fiscal 2021, Symrise expects sales growth of 5 percent to 7 percent and EBITDA margin of around 21 percent.

Heinz Jürgen Bertram, CEO of Symrise, said, 'Battling the pandemic will continue to define people's everyday lives and economic conditions in 2021. However we look with confidence into the current financial year and expect reliable demand.'

Further, the company confirmed its target of achieving average annual growth of between 5 and 7 percent (CAGR) by the end of 2025. 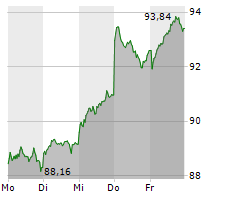