SALZGITTER (dpa-AFX) - Salzgitter Group (SZGPF.PK, SZGPY.PK) said it delivered a pre-tax profit of 604.5 million euros in the first nine months of the fiscal year 2021 compared to a loss of 224.4 million euros, prior year. The Group said this result was driven by the dynamic uptrend in selling prices through to August that first and foremost impacted the results of the Strip Steel and Trading business units. The participating investment in Aurubis AG again delivered a very gratifying earnings contribution, the Group noted.

The company reaffirmed its 2021 guidance and continues to expect: an increase in sales to more than 9 billion euros, a pre-tax profit of between 600 million euros and 700 million euros.

'Assuming a positive vote from the Supervisory Board in the summer of next year, we may be able to commence hydrogen-based steel production as early as the end of 2025 and, by 2026, already be producing over one million tons of steel based on this concept,' Gunnar Groebler, CEO of Salzgitter AG, said. 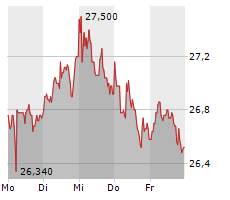