LONDON (dpa-AFX) - Diageo plc (DGE.L, DEO), on Monday, announced the commencement of its the third phase of its previously announced return of capital or ROC programme of up to £4.5 billion to shareholders to be completed during fiscal 23.

Under the first two phases of the ROC programme, which were completed on 31 January 2020 and 11 February 2022 respectively, Diageo repurchased shares with an aggregate value of £2.25 billion.

In each case the aggregate value of shares repurchased would be net of any fees payable to or by UBS under the terms of the agreement. This agreement would commence on 21 February 2022 and will end no later than 5 October 2022. The purpose of the repurchases is to reduce the share capital of Diageo and all shares repurchased under this agreement will be cancelled, the company stated.

Further, the company noted that the third phase of the ROC programme, under which up to £1.7 billion of shares would be repurchased, would occur within the limitations of Diageo's existing general authority to repurchase up to 233,611,282 shares granted at its 2021 Annual General Meeting. 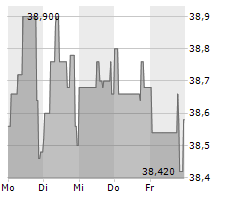