LONDON (dpa-AFX) - Ashtead Group Plc (AHT.L), a British industrial equipment rental company, on Tuesday posted a surge in earnings for the third quarter, amidst an increase in rental income from its markets spread in various parts of the globe.

For the quarter ended on January 31, the London-headquartered firm reported a pre-tax profit of $393 million, compared with $284 million a year ago, whereas it posted pre-tax adjusted earnings at $427 million as against $304 million last year.

The company generated its earnings per share for the three-month period at 66.9 cents, compared with 48.2 cents, on year-on-year basis.

For the third quarter, the British firm recorded adjusted earnings per share at 72.7 cents, versus 51.5 cents per share, compared with the same period of 2020.

Ashtead generated an operating profit of $449 million, compared with $348 million, whereas it reported EBITDA at $877 million as against $726 million, reported last year.

Reflecting firm demand, the Group's revenue for the thirteen-week period rose to $2 billion, from $1.62 billion, recorded for the quarter ended in January 2020.

The company's rental revenue for the quarter was also moved up to $1.81 billion, from $1.44 billion, reported a year ago.

Moving forward, for the fiscal 2022, the company expects its capital expenditure to be slightly ahead of its previous guidance at around $2.5 billion.

For 2022-23, the company said, its 'Initial plans are for gross capital expenditure to be in the range of $3.2 billion - $3.4 billion, which should enable low to mid-teens rental revenue growth in the U.S. next year.' 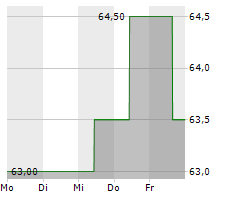