Further, the company confirmed that an interim dividend of 13.8 pence per share, higher than last year's 6.2 pence, will be paid on July 8 to shareholders on the register at the close of business on June 10.

Looking ahead for fiscal 2022, the company expects significant progress in adjusted operating profit and adjusted earnings per share for the Group.

Notwithstanding the greater inflationary pressures and lower second half margins, the company still expects growth in adjusted operating profit for the Group in the second half compared to the same period last year. 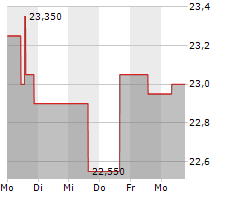