LANDSBERG AM LECH (dpa-AFX) - Rational AG (RTLLF.PK), a German manufacturer and retailer of cooking appliances, on Wednesday posted a rise in earnings for the first half, amidst an increase in revenues, supported by an improvement in demand. In addition, the company has confirmed its Annual guidance.

For the six-month period to June, the German firm posted earnings before financial result and taxes (EBIT) of 93.1 million euros, compared with 84.4 million euros a year ago.

For the quarter ended in June, the company posted an EBIT at 45.4 million euros, less than 52.2 million euros of last year quarter.

Revenues for the quarter moved up to 232.4 million euros, from 211.6 million euros recorded for the second quarter of 2021.

Looking ahead, for the fiscal 2022, the company has confirmed its outlook.

Rational AG expects that cost increases and supply hurdles as a result of the lockdowns in Shanghai and the Ukraine crisis to continue to affect it indirectly.

For the fiscal 2021, the company had posted sales revenues of 780 million euros. 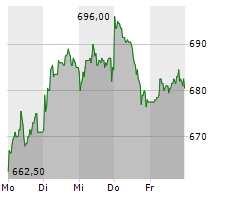