WOLFSBURG (dpa-AFX) - Luxury carmaker Porsche has overtaken its former parent Volkswagen (VLKAF) to become the most valuable automaker in Europe.

Although Porsche's shares slipped below their listing price on Monday to 81 euros, it rose to 93 euros on Thursday morning, giving the sportscar brand a market valuation of 85 billion euros ($84 billion). The growth pushes Porsche's valuation above Volkswagen's 77.7 billion euros ($76.6 billion).

Mercedes-Benz comes in at third among European carmakers, followed by BMW and Stellantis.

A Volkswagen spokesperson said, 'Inflation data from Europe and the United States, recent worries over energy supply in Europe and the escalation of the war in Ukraine last Thursday led to fluctuations which made small-scale stabilization measures necessary.'

Overall, up to 14.85 million shares worth 1.2 billion euros are available via the greenhouse option in the four weeks after the offering as a stabilization measure.

Bank of America acquired the shares for between 81 and 82.50 euros, compared to the original issue price of 82.50, the bank said in a statement on Wednesday. 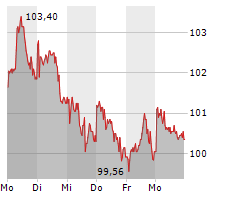